Every day in real life we go through a many struggles ranging from man vs. man, man vs. himself and even man vs. nature. The most common struggle we all face is that of man versus man. In the short stories “Cathedral” by Raymond Carter and Ernest Hemmingway’s “A Clean Well-Lighted Place” the main principal of the story is that of man versus man. In both short stories 3 characters are used, but in each story each character is completely different than the other.

Don't use plagiarized sources. Get your custom essay on
“ Similarties and Differences ”
Get custom paper
NEW! smart matching with writer

“Cathedral” and “A Clean Well-Lighted Place” share similarities and differences with the main principal of man versus man and the reasoning behind why one man is against the other.

Both stories also share similarities and differences in their setting and the most significant differences both stories have is the resolution. In “Cathedral” and “A Clean Well-Lighted Place” 3 main characters are used. In each story, one character is the antagonist (the man going against the other) and the protagonist.

The old man in “A Clean Well-Lighted Place” is the protagonist, who the other characters and reader know nothing about other than the fact that he is old. In both stories, the wife and the older waiter both try the protagonist. The first line in “Cathedral” is “This blind man, an old friend of my wife’s, he was on his way to spend the night”.

The wife knows the blind man and is friends with him. In “A Clean Well-Lighted Place” the younger waiter is angry because he doesn’t understand why the old man won’t go home to which the older waiter replies “‘He stays up because he likes it. ’” While the characters are similar and different in each story the main conflict of Man versus Man is another point that each story shares similarities and differences. In both “A Clean Well-Lighted Place” and “Cathedral” the central issue and reasoning behind the conflict of man versus man is addressed.

In each story one main character is against another, both have similar and different reasons of why. In both stories the major conflict of man versus man happens because the antagonist does not fully understand the protagonist. In “Cathedral” the husband is against Robert because he does not know how to act around Robert because Robert is blind. The husband has never had to encounter a blind person before and doesn’t wish to. A excerpt from “Cathedral” shows exactly how the husband feels of Robert’s visit: “I wasn’t enthusiastic about his visit. He was no one I knew.

The younger waiter is making assumptions about the old man throughout the story and finally kicks him out of the cafe. The reasoning that the younger waiter is against the old man is that he doesn’t understand the actions of the old man and doesn’t want to. Both stories share that in common, that the antagonist does not understand and does not want to get to know the protagonist. Both stories share similarities between man versus man and the reasoning behind this conflict. “Cathedral” and “A Clean Well-Lighted Place” also share similarities and differences between their settings.

Neither one of the stories gives a town’s name for the reader to associate the story with. Also, neither story gives too many details about the place of the story. The only indication of how the cafe was in “A Clean Well-Lighted Place” was when the older waiter said “… This is a clean and pleasant cafe. It is well lighted”. Both stories share the similarity in setting because of the stories taking place at night time. Both stories are different in the setting because of the fact that one takes place in a house, and the other takes place in a cafe.

The last line in “Cathedral” was the husband saying “’It’s really something,’”. This last line shows that the husband finally understands that although Robert is blind, that Robert can still experience things just as well as him. The resolution in “A Clean Well-Lighted Place” was the fact that the younger waiter got to go home, but the younger waiter didn’t take anything away from his experience meaning the conflict he has with the old man is still on going. In “Cathedral” the husband eventually stops the conflict of man versus man when he finally realizes that Robert is just like him.

The short stories “Cathedral” by Raymond Carter and “A Clean Well-Lighted Place” by Ernest Hemmingway both share similarities and differences. When the similarities are pointed out the two stories seem to run parallel with each other: man versus man, 3 characters and the setting. But, when the differences in the details of man versus man, the three characters and the setting are pointed out it is easy to see these stories have completely different plots and twists. The major difference between both stories is the resolution. Both stories show similarities and differences within each. 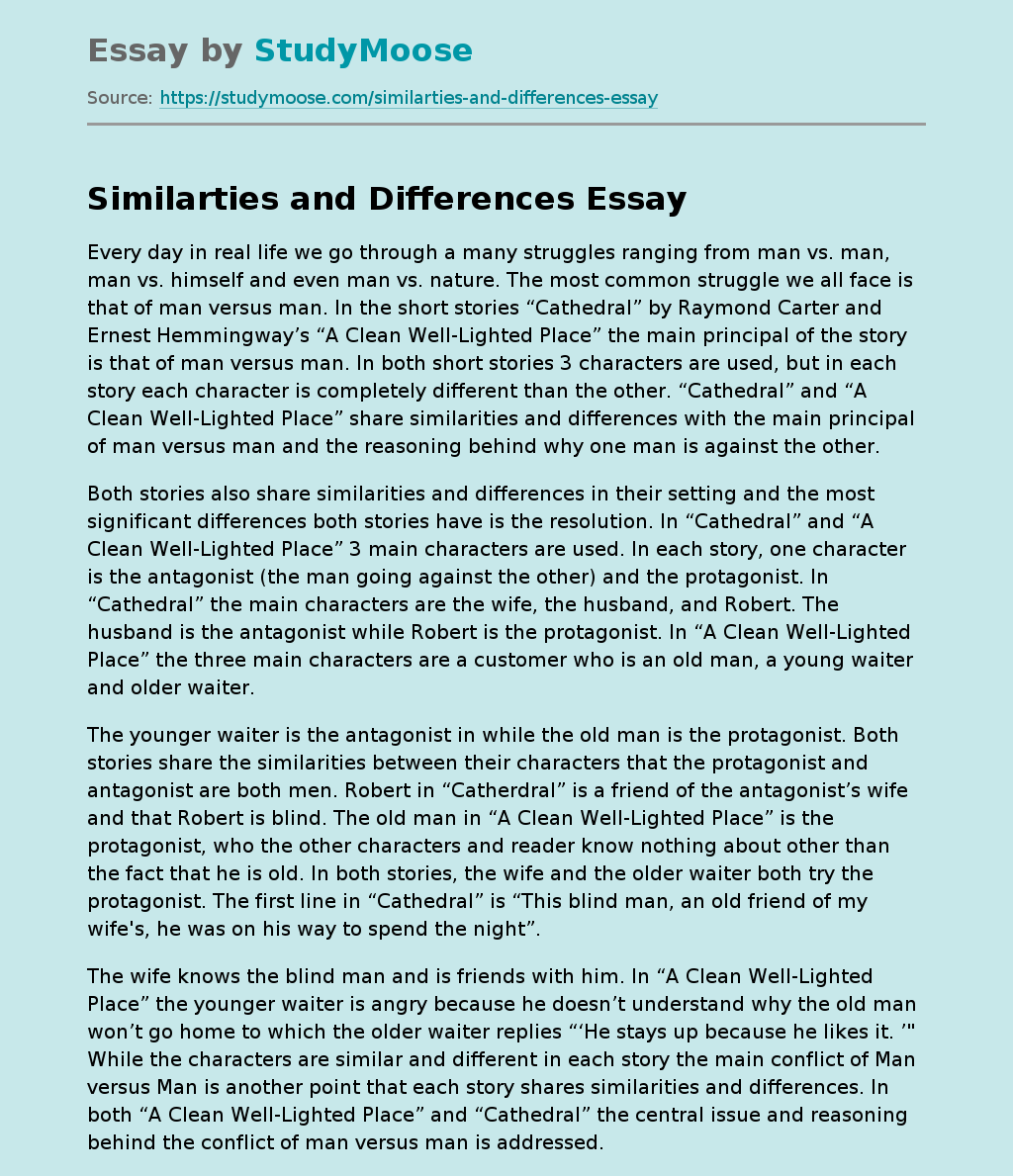