Similarities and differences of Emma and Charles

The first part of the novel

In the first part of the novel, Madame Bovary, written by Gustave Flaubert, there are two main characters introduced to us; Emma Rouault and Charles Bovary. These two characters marry and become the “Bovary’s”. They both have interesting characteristics that lead to being opposing characters. In part one, we come across several descriptions of appearance, personality, education, background, and attitudes; that help us analyze these.

The novel starts off with an introduction of what type of person Charles was during his childhood at school and what his classmates thought of him.

Don't use plagiarized sources. Get your custom essay on
“ Similarities and differences of Emma and Charles ”
Get custom paper
NEW! smart matching with writer

Since a very young age, Charles had always been a very educated and respectful person towards others but always showed to be very insecure. He was described as “[…] country lad […] taller than any of us (pg15)”. Therefore you can see that his class mates didn’t really accept him because he was different as for his physical appearance, character and style of dressing.

The narrator talks to the reader as a school mate which sat in his class and observed him very carefully, he is also described as a forgettable child which shows that his presence didn’t remain in people’s minds.

During his school years, Charles tried his best to attain the best results he could as he had never received a primary education- They “[…] postponed sending him to school as long as they possibly could, for reasons of economy”(pg.18)

Charles had a mother that loved him immensely and would spoil him rotten, whereas Emma lost her mother at a very young age when she was at a convent for her studies.

Charles cared truly of his mother as when he was in boarding school he would write a letter to her once a week telling her everything that he was experiencing, as for Emma she really never actually cared, and upon the death of he mother she took it as an opportunity to feel sentimental and be melodramatic like in the novels she would read. This is a big contrast of Emma and Charles as they clearly have different values of life.

Emma’s description is not presented to us as Charles’, what we do see, is a clear description of how he sees this beauty he eventually believes to have fallen in love with notwithstanding the fact he actually didn’t understand her as a person. Her description is gradual during the book and gives the reader a sense on mysteriousness towards her character although she is primarily introduced in chapter two, at Les Bertaux, when she meets with Charles for the first time because of Emma’s father, Monsieur Rouault’s broken leg.

Emma is described as being a very well mannered, helpful, good looking and well kept woman. “A young woman, clad in a blue merino dress with three flounces, appeared in the doorway to welcome monsieur Bovary […] (pg.27) In these particular details you can spot the first differences, Emma was educated, good looking and active person; She knew how to dance, draw, do embroidery and play the piano and knew geography and had no economic difficulties and “Emma knew how to run the house as well” (pg.54). Charles instead, was a simple country lad which received no education and received only love from his mother. This is another contrast because Emma lost her mother “Madame Rouault had died two years ago (pg.26)” Therefore she didn’t have a woman figure in which to count on. I think this may be a major difference because an event of this kind affects your life a lot and I think that this event is also linked to Emma’s unhappiness later in the book since she is a woman that is morally corrupt and not capable of accepting and appreciating the realities of her life. “[…] for her, life was cold as an attic facing north, and silent spider boredom wove its web in all the shadowed corners of her heart(pg.57)”

Charles Bovary is a very weak and uncertain character also regarding his love life. Whereas Emma, looks much more confident in herself with her clothing and her characteristics being much more audacious, “[…]. Her cheeks were like rosy apples; and she carried a pair of tortoise-shell eye-glasses attached, in masculine fashion, to two buttonholes of her bodice”

Charles always had woman that dominated him in the course of his life therefore they both had very different ways of loving.”[..] she had been told she would be unhappy… And she ended by asking him for a dose of medicine and a little more love (pg.25)”

He is a very fussy and demanding man that has nothing to give to people. “this one had nothing to teach; know nothing, wanted nothing (pg.54)”. This shows a clear difference between Emma and Charles because she tried to make him happy all the time and loved sharing her abilities and her education with him. “Sometimes he came home late, […] he would want something to eat and as the maid had gone to bed, Emma looked after him. (pg.55) and he would take everything for granted and was proud of having such a wife when he did nothing to deserve her or to thank her. Emma believed in love and shows to be a passionate love dreamer “In the pocket of her apron she always kept some novel or other […] they were all about love and lovers (pg.49-50)” Now to her it is just a memory that feeds her discontent toward her life. As to her dreams, she has a conflict with her day to day life because she is not capable of achieving those emotions she reads from those books, she doesn’t face with the problems of reality that at times are hidden in romantic stories.

She dreams of the extreme forms of love and wealth in her life, ignoring every positive aspect there is, she doesn’t even see positive aspects in the world around her. An example of this way of being would be when they went to la Vaubyessard, the home of the Marquis d’Andervillers for a feast held by one of Charles’ patients. Emma loved it and felt comfortable with the atmosphere of the chateaux, the people and their detailed dressing” […] a group of dignified gentleman with cravats high up round their chins […] (pg.60)” and in all the decorations she saw around.” […] warm atmosphere compounded of the scent of flowers and of fine linen […]”

The dream of Emma

This was her dream; she would have wanted to live all her life like those people. She was fascinated by the connection with these people, royalty and automatically didn’t bother about appearance, this is also the reason why Emma feels embarrassed of Charles and decides to not be near him inventing excuses in order to go and dance with the wealthy people, which seemed to her a dream come true. ” ‘let me alone!’ she said ‘you’ll rumple me.'(pg.63)” More over, she with these experiences she would convince herself more and more that the life she read in novels did in fact exist and so she continued to try and try to reach her dream thinking that these people would eventually help her reach it.

Putting together all the information about both Charles’ and Emma’s life, you can see that they are opposing characters as I said at the start of this character study. One thing I noticed was that there is an opposition between Monsieur and Madame Bovary, the same opposition present in Emma and Charles’ love story. Emma and Madame Bovary are very similar in character although Charles mother doesn’t really accept Emma because she thinks Emma has conquered Charles’ heart therefore there is no space for her in his life. “But now she saw in Charles’ love for Emma, a kind of defection from her own love(pg.56)”, “Madame Bovary seemed to be prejudiced against her daughter-in-law who had ‘ideas above her station of life(pg.55)”

Emma has a big problem: she doesn’t have the competence to distinguish reality and dreams, therefore lives her life convincing herself she should have much more, and she also pretends to have unreachable dreams sometimes. Apart from this, she is competent woman which is able top do many different things and she is much more active than Charles. Whereas Charles is very similar to his father in some things such as being a boring person and unable to do anything, which is proved all though his life from not passing his exam the first time around to then not being sure of his medical intelligence and always recurring back to his studies. “Charles’ conversations were flat as a street pavement […]”, “He couldn’t swim, or fence, or fire a pistol, and was unable to describe a riding term she came across in a novel one day (pg.54)”

A small detail I found showing the differences of education between Emma and Charles, comes around where we talk about their religious beliefs and how their parents taught them to approach the church. Charles father: ” to jeer at church processions” therefore Charles was brought up with this type of education, Emma instead was brought up very differently because they taught her the importance on the church “When she went to confession, she invented small sins in order to stay there longer(pg.48)”, even though she did it in a sense of hypocrisy since she was in love with the words in the bible that connected to love.

As a conclusion I would say that all the characters in the first part of Madame Bovary are very interesting because they all have their small characteristics which make their characters contrast one another. Moreover I think that there are some characters that look opposing one to another but they have some things in common anyway. I like the way characters are linked and interact with each other in the book because you can see that in this first part, the most underlined topic by Gustave Flaubert is the description of the character and the details on their ways of being through different peoples eyes.

Similarities and differences of Emma and Charles. (2016, Jun 02). Retrieved from http://studymoose.com/similarities-differences-emma-charles-new-essay 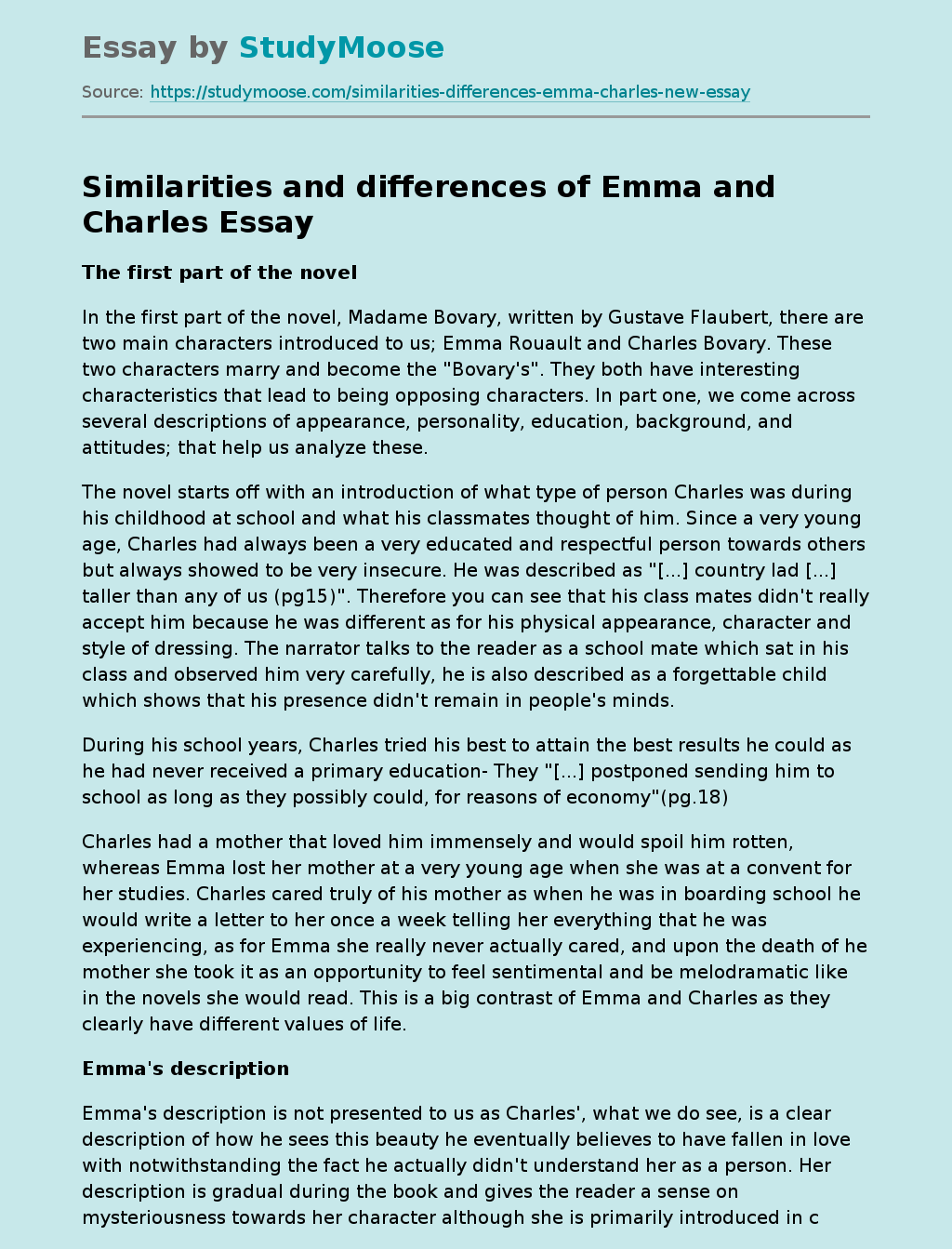