Throughout history, art was created for a multitude of reasons; for rituals, education, or even decoration. The art comes in many mediums and even though most of them are unique and serve their own purposes, they are comparable. One of the most common comparisons of most art pieces are where they are preserved. The Metropolitan Museum of Art presents centuries of works from around the world from numerous civilizations. The Column Statue of a King is in the Medieval Europe Gallery.

Don't use plagiarized sources. Get your custom essay on
“ Similarities and Differences Between The Column Statue of a King and The Human-Headed Winged Bull and Winged Lion ”
Get custom paper
NEW! smart matching with writer

It is created out of Limestone around 1150-60 CE, and stands at about a foot and a half tall. The Human-Headed Winged Bull and Winged Lion (Lamassu) is in the Assyrian Royal Court Gallery. It is created out of Alabaster and is about ten feet tall. The two pieces have more differences than similarities. The similarities are shown through the duplication of the items through the surrounding area and the use of them as decoration, but the differences are huge in regards to the design, purpose and the background history.

Although, my paper’s main point is about the significant differences between the two pieces, there are a few similarities. Both Statues are not a one of a kind. Plenty copies of the Lamassu can be found.

“The Abbey of St. Denis is famous in the annals of France as the Royal Abbey — the burial place of Kings and Queens and of a few national heroes.” This means there are multiple copies of The Column Statue of A King concept, except of course, it has individualistic qualities that represent the king and queen they belong to.

The Lamassu also has multiple copies of the same concept, “More than one hundred monumental sculptures of winged human-headed bulls have been identified among the remains of Assyria’s capitals, of which around forty come from Nineveh.” This means it was a common idea amongst this civilization, just like the Column Statue was. They were both also decorative elements of the buildings they were apart of.

The Column Statue was a figure built into a wall and did not have a significant reason to be attached as a column apart of the church, and the drapery of the garment worn was well-carved. The Lamassu was carefully carved to serve its purpose but also look pleasing to the eye. One of the major differences of the two statues are the periods they have come from. The Gothic period is sub period within the Medieval art period that took place in France, along with the Romanesque period. The term Gothic is a pejorative term developed from a “barbaric” tribe, coined in the Renaissance era as the designs were not up to their “clean” and simplistic aesthetic. Defining characteristics of the Gothic period was the Gothic Architecture and Monumental sculpture. New building techniques created taller and lighter structures.

“[The] Development of medieval art is the birth of the Gothic style in the Ile de France under the recognizable genius of Abbot Suger of St. Denis. This relatively spontaneous birth in the fourth decade of the 12th century contrasts greatly with the nascence of Romanesque art, which appeared simultaneously in many widely located centers and which gave rise to an array of regional styles. It was from the regional variations of French Romanesque art that Abbot Suger created an ingenious synthesis; the Gothic System of architecture and Gothic portal sculpture ensemble of the west façade of St. Denis” meaning the origins of the Gothic style were set in Ile de France in the early 12th century by Abbot Suger’s Abbey Church of St Denis. The Gothic period was developed peacefully through a time of prosperity. The Neo-Assyrian Period contrasts with the Gothic Period as the title was a transition of artistic expression, not a transition of an entire society as a result of war and conquest. Assyria is located in the Tigris-Euphrates river region, Mesopotamia.

That region was inhabited by numerous cultures like the Sumerians, the Akkadians, the Babylonians and then the Assyrians, who have fought to attain the region and have alternated ownership via war. The area is not stable because of the the constant warring as they have developed an empire that participated in trade that their location made desireable and imposed their own beliefs onto the other city-states they have conquered, they have lost the territory previously before. In order to maintain a flourishing empire, defense and intimidation were the top priority, therefore their military was powerful and they took previous techniques they used during their first empire rule (2025 to 1750 BCE), and second empire rule (1265-1050 BCE) to perfect their third rule (911 to 612 BCE). The Neo-Assyrian period was developed at a time of war and differs between the gothic period as it was not stable, influencing their art and the two statues. Another difference between the two works is the significance and design.

The Column of A King statue was developed apart of St. Denis by Abbot Suger. An abbey is a traditional burial place for the Queens and Kings of France, and also Old testament kings and queens. The way the statue is displayed is in a peaceful manner, likened to a saint. It is naturalistic and depicts the person it is suppose to represent in a positive way. Despite that, this specific piece is not as well documented or significant in history like St. Denis as a whole and the Lamassu is. The Lamassu was designed apart of the Palace of Sargon II in 705 BCE as an intimidation device. It was designed in a stylistic manner, “Some were represented with the body and tail of a fish under the belly and with their hair decorated by a fish head. The winged human-headed bulls from Khorsabad are finer: they wear a cylindrical head-dress with three pairs of horns surmounted by feathers and encircled by a headband of rosettes. These figures have the peculiarity, at first unnoticeable but surprising in three-quarter view, of having five legs.

Thus these figures were represented standing if seen from the front and walking if seen from the side. However, from the position of these sculptures and from the dimension of the rooms in which they were installed, it seems unlikely that all five legs could have been seen at the same time.” The last sentence of the design quote also brings up the purpose of designing the lamassu with five legs. It is an intimidation technique so people who are heading into the gateways where they are mounted at could believe the figure is walking with them, along with its towering height of ten feet. This Lamassu in particular was “…situated on each side of the main gates, these figures guarded the city and palace entrances. They were carved from monolithic limestone blocks and completed after they had been set up either in gateways, in which case the head is in line with the body, or in the alignment of the walls flanking the entrances, with the head turned at an angle of ninety degrees.

Botta suggested that these colossi had originally been surmounted by a straight lintel; however, Place’s excavations in Khorsabad revealed the existence of brick arches built above some of the gates. Although they played a real functional role due to their position, their presence does not seem to have been architecturally indispensable because other entrances with similar dimensions were not strengthened in this way. Consequently, it would be better to speak of an ‘active facade’…” This supports the claim that the Lamassu had a stronger role in the civilization’s unstable environment. It was displayed to keep invaders and enemies on edge while posing as a decorative prop. Although the two pieces are similar by the copies that can be found in the surrounding area of their origins and the decorative element, they contrast greatly. The research I have done further supports the fat that the Lamassu is more significant than the Column Statue of the King.

Similarities and Differences Between The Column Statue of a King and The Human-Headed Winged Bull and Winged Lion. (2021, Sep 29). Retrieved from https://studymoose.com/similarities-and-differences-between-the-column-statue-of-a-king-and-the-human-headed-winged-bull-and-winged-lion-essay 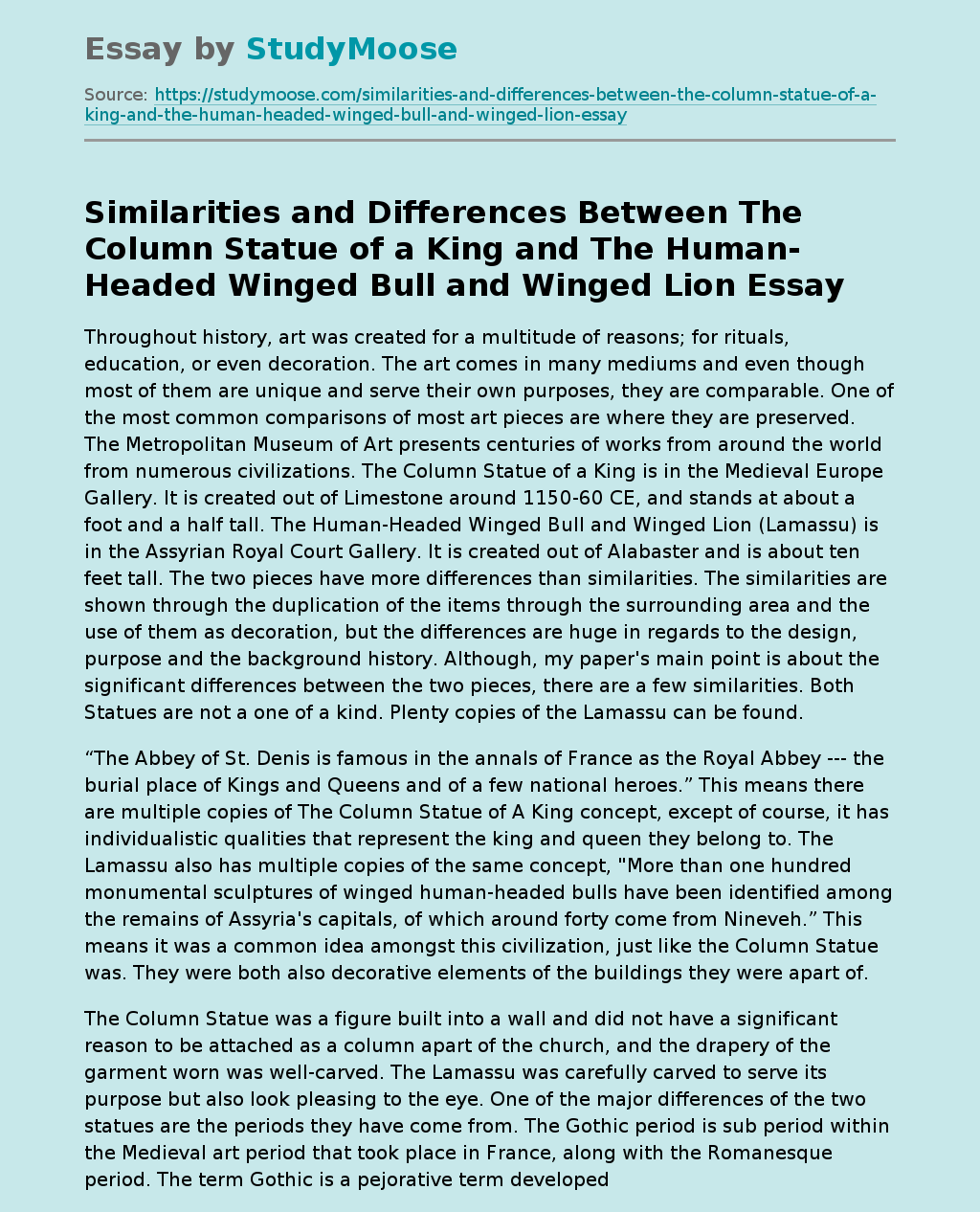