Similarities and Differences Between Hester Prynne and Edna Pontellier

There are many similarities and differences between Hester Prynne and Edna Pontellier. Although The Scarlet Letter and The Awakening were written in different times and tell the story of dissimilar communities in which both main protagonists need to break the rules governing the society in order to explore their inner selves and fulfill individual desires.

What both women share is the fact that they had troubles to find themselves among the people they lived with and accept the rules of the community.

Don't use plagiarized sources. Get your custom essay on
“ Similarities and Differences Between Hester Prynne and Edna Pontellier ”
Get custom paper
NEW! smart matching with writer

What is more Hester, as well as Edna, came from different backgrounds than Puritan or Creole and entered them because of the act of marriage. Hester was born in England and Edna was raised in a Presbyterian family in Kentucky. Hester’s husband sent his wife to a Puritan colony in America and Léonce Pontellier – New Orleans’s Creole took Edna to Louisiana. They were forced to live among the communities different in terms of religion and customs to those from their pasts.

The next similarity is the fact that both got married young and did not love their husbands. Hester married a scholar who was much older than she, did not share her passions and preferred to spend his time researching rather than sharing it with his wife. Edna accepted Léonce’s proposal only because of the strong opposition of her closest family. For her it was an act of rebellion against her strict father. She also knew that a rich businessman would be able to guarantee her stability and financial security.

The unhappy marriages and strong sexual needs in both cases resulted in an affair prohibited in the communities. Hester’s sexual awakening is not described in the novel but Hawthorne mentions it’s consequences (a child that could not have been conceived by her husband). However, the two heroines on the pages of the books realize that romantic love is born from sexual desires. They were not afraid to express their needs. Hester during an honest conversation with Reverend Arthur Dimmesdale in the forest told him all about her emotions, and feelings. She was not afraid to openly discus the sexual act that had happened between them and called the child cursed by the society a consecration of it. Edna violated the Creole’s code having her sexual needs fulfilled by Alcée Arobin. Besides she fell in love with a young bachelor – Robert Lebrun and on the last pages of the novel declared that she is willing to give up her marriage, escape from her husband and be with him. Happiness and fulfillment of both women were limited by social conventions and norms.

Both women were not only awakened in terms of their sexuality but also in terms of individuality. They realized that although they live in a collective they have different believes, thoughts and codes of behavior that they are not willing to give up on. One of the ways of expressing their individuality was through art. Hester had an amazing skills in sewing and turned her scarlet “A” – a symbol that was supposed to be identified with shame into a work of art. Edna’s talent was sketching. She enjoyed making sketches and in some point of her life wanted to be an artist.

Nevertheless, in some spheres the two women were different. The most vivid difference between Hester and Edna was the attitude towards children. Hester devoted her life to her daughter Pearl. Although alone, she managed to raised her and gave Pearl a lot of attention. Edna on the other hand acted more egoistically. She identified her children with imprisonment and treated them as an obstacle in her way to freedom.

In general Edna was more self-centered than Hester. Hester engaged herself into charity despite financial difficulties. Edna in contrast, having a lot of money from her husband spent it indulging herself. It may be explained by the fact that they lived in very different societies. The poverty was common in Puritan Colony and Edna lived among rich people.

The community of Creoles was more liberated than XVII c. Puritans from Boston. Despite the adulteress affair and pregnancy Hester outwardly acted like a conformist. Her inner thoughts and desires were rebellious but she behaved like the rest of the settlers. Edna on the other hand inwardly and outwardly acted in non-conformist manner in opposition to Hester not being threatened by legal repercussions.

It also seems that Hester was mentally stronger than Edna. Unhappy and unfulfilled she lived with people that did not accept her, hoping that one day she and her lover would leave America and create a family in Britain. Unfortunately, her dreams never came true but until she died she lived among people who had ostracized her and managed to change their minds about the letter on her chest from “adulteress” to “able”. Hester brought hope for social relaxation. Edna dreaming and fantasizing about Robert – the man that she truly loved – was unable to continue her life knowing that they can not be together. After their romantic reunion in The Pigeon House Robert left Edna a note informing her that although he loves her, he needs to leave. Devastated and depressed she did not want to live in a lie and seeing no other option for her liberation Edna killed herself.

Undoubtedly both – Hester and Edna – stood for their believes and rights. However, it was only Hester who in the course of the novel dreamed about changing Puritan’s views on women’s rights and managed to loosen the rules governing the society not for herself, but for future generations. Edna on the other hand cared only about herself. In her pursuit of fulfilling sexual needs she abandoned her children and disrespected her friends. Also her materialism was noticeable. Edna was spending her husband’s money even after she got involved in an affair. Out of the two heroines Hester seems to be more positive character.

Similarities and Differences Between Hester Prynne and Edna Pontellier. (2016, Nov 19). Retrieved from https://studymoose.com/similarities-and-differences-between-hester-prynne-and-edna-pontellier-essay 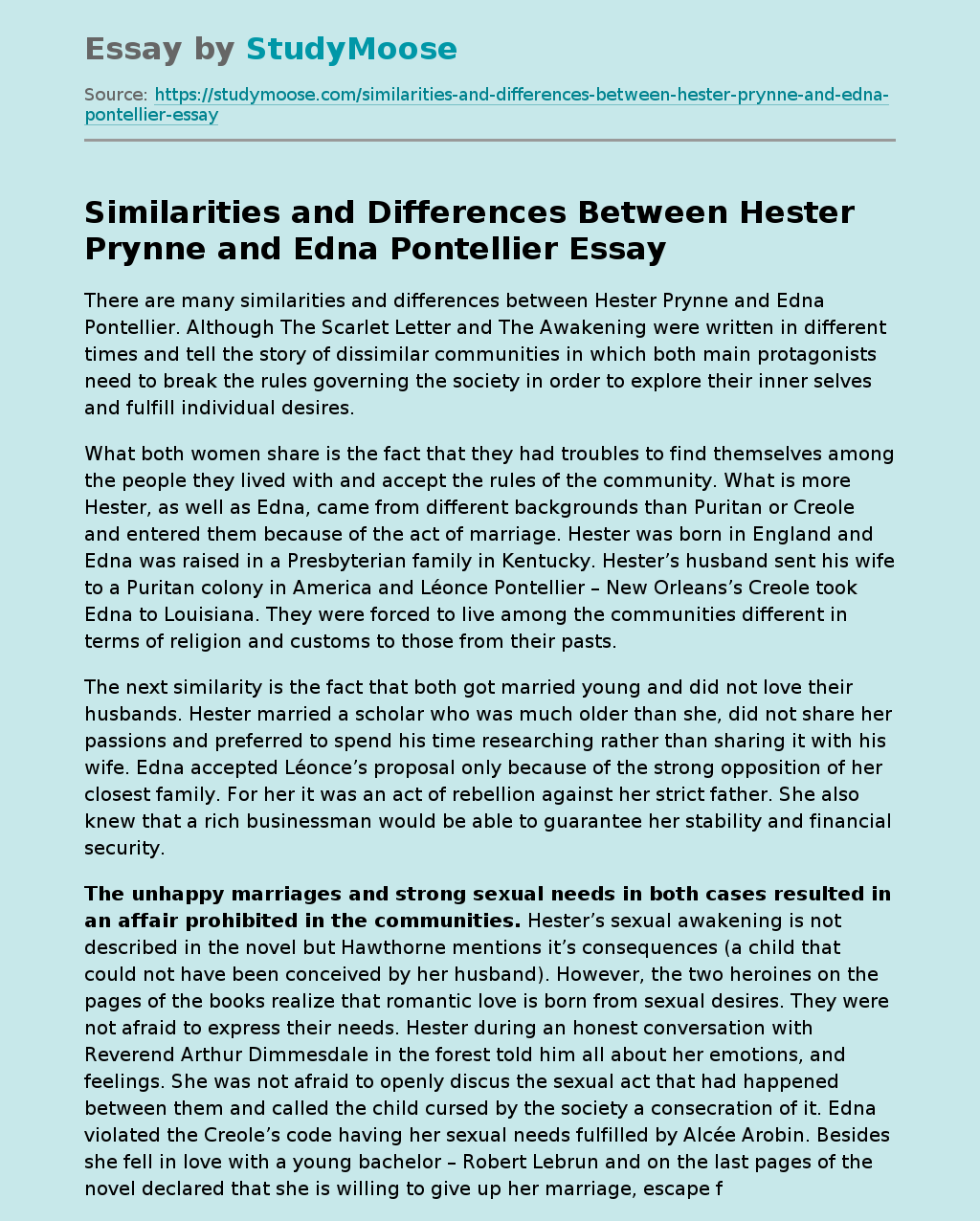