Similarities and Differences Between Alice Walker and Tim O'Brien

These stories share a similar tone. Self-realization is a tone that not many authors use in their books. Alice Walker and Tim O’Brien made their stories like this to show people that they can correct their faults even when the individual thinks it too late. Mama during everyday use was always talking highly about her daughter Dee; while she would belittle Maggie. While Mama and Maggie wait for Dee, Mama was daydreaming about being on a T.V program. Dee arrives, she appears to dress different and she’s with someone whom she finds strange; Dee rummages through her mother belongs looking for things that can signify her ‘culture.

Don't use plagiarized sources. Get your custom essay on
“ Similarities and Differences Between Alice Walker and Tim O’Brien ”
Get custom paper
NEW! smart matching with writer

’ Dee and Mama then get into a heated argument about who can keep the quilts and other belongings; At this point, Mama realizes that she has been focusing on the wrong child similar to the things they carried. Lieutenant cross was stuck remembering and thinking about his one-sided love Martha.

Unlike the rest, Lieutenant cross kept on thinking about his love Martha while the others continued their task.

Proficient in: Everyday Use By Alice Walker

During this time Lavender was killed after he finished his business. The lieutenant becomes aware of what his action has caused; After that, he calls for reinforcement to take Lavender. Lieutenant begins a fire and starts to throw Martha’s letter the lucky charm that she gave as he comes to realize that his love for Martha is only one-sided. Lieutenant Cross and Mama began to realize that not everything is the way they desired.

They both know that the process to get over the outcome will be tough. The themes are diverse everyday use is about cultural themes; While the things they carried is about personal themes. Race and heritage is a significant part of everyday use; Dee has never wanted to accept the truth that she is a poor African-American woman. Dee tells her mother ‘You just will not understand. The point is these quilts, these quilts!’ (Walker) meaning that her mother won’t understand the meaning of the quilts and why they are relevant to her. Dee attends college in Augusta and embraces the name Wangero Leewanika Kemanjo.

Declares that she couldn’t bear being named by people who oppressed her; while adopting an African culture that she recently learned about instead of accepting her ethnicity. The things they carried is a story about young men who were deployed during the Vietnam war. Courage is an important theme as the story revolves around war and love. Courage is viewed lowly as most people in war react to the smallest noise and that no one acts bravely for no reason. Courage is something that Lieutenant cross showed when he was starting to get rid of everything about Martha and making his crew a priority. The book is mostly about burdens from Emotional to physical hardships the war forces towards young soldiers.

The Vietnam war tarnishes the innocence of these young soldiers; Many of the soldiers are from the age 18-26 barely starting life and getting to see how the world is. Revenge is a theme that doesn’t show the slightest in everyday use. Revenge is a trait that people of all ages can plan but during war especially the Vietnam war young adults watching their friends and local acquaintances dying. The soldiers may or may not notice what the enemy has done so wrong to lead them into this war but from what they experience they will do anything they can to accomplish whatever means necessary to get revenge.

Similarities and Differences Between Alice Walker and Tim O'Brien. (2021, Dec 07). Retrieved from http://studymoose.com/similarities-and-differences-between-alice-walker-and-tim-o-brien-essay 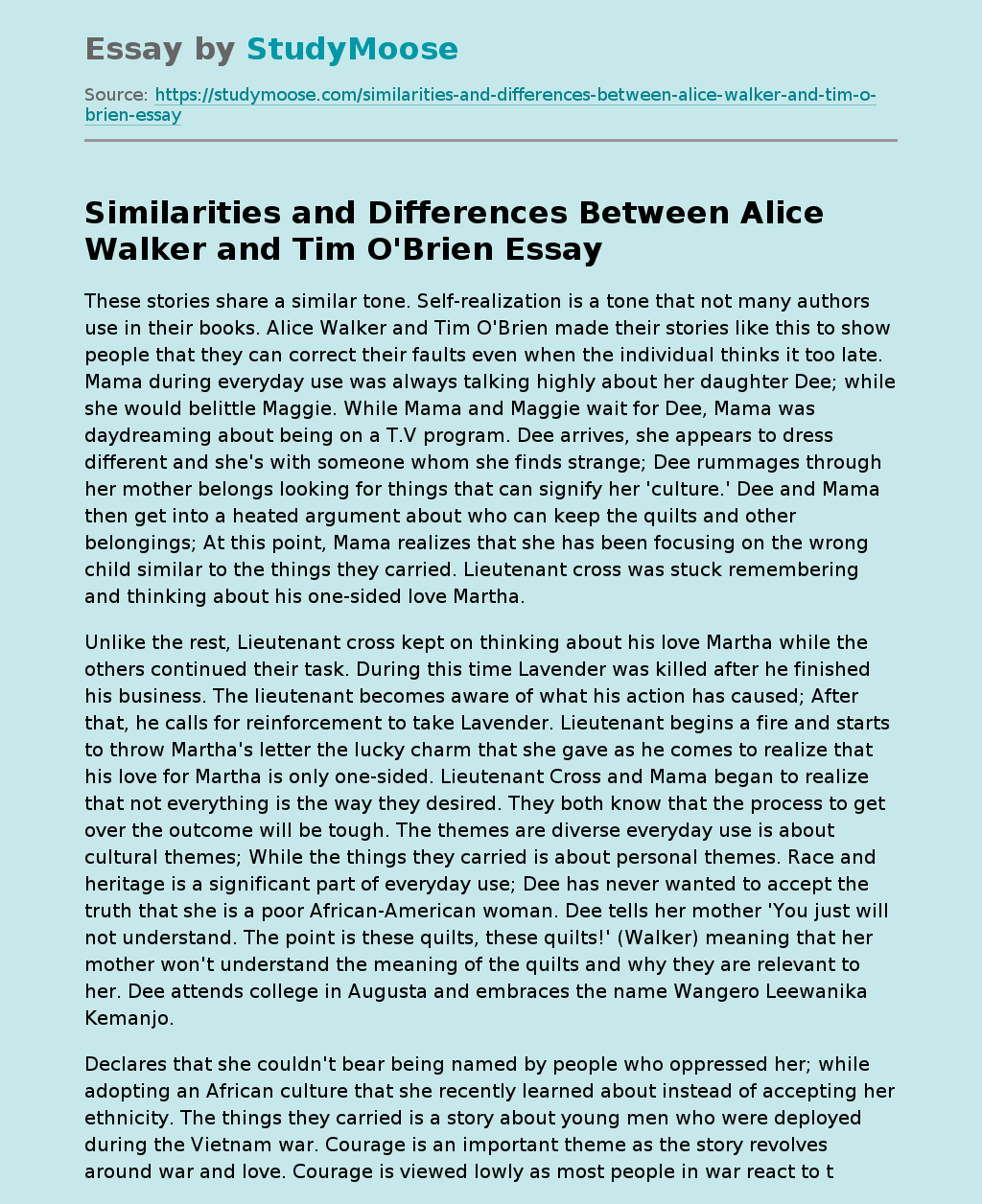