Silk – the queen of all fabrics is historically one of India’s most important industries. India produces a variety of silks called Mulberry, Tasar, Muga and Eri, based on the feeding habit of the cocoons. The sericulture industry today employs over 700,000 farm families and is mostly concentrated in Karnataka, Tamilnadu and Andhra Pradesh and to some extent Assam and West Bengal. Karnataka accounts for more than 70 percent of the country’s total silk production.

Sericulture is one industry which is beneficial to the agriculturists.

Don't use plagiarized sources. Get your custom essay on
“ Silk Industry ”
Get custom paper
NEW! smart matching with writer

As in today 56 lakhs people are dependent on the sericulture industry, 5. 6 million people out of which 4. 7 million are agriculturists. The rest are reelers, weavers etc. India is the second largest producer of silk, contributing to about 18 per cent to the world production. What is however, more noteworthy is the fact that India’s requirement of raw silk is much higher than its current production at present.

Thus, there is considerable scope for stepping up production of raw silk in the country, overcome the persistent conflict of interest between exporters of silk products and producers of raw silk.

While sericulturists want imports of raw silk to be restricted to have better market for their produce, exporters want imports of cheaper raw silk so as to be able to export more silk products at competitive rates. India has all the four varieties of silk namely, mulberry, tassar, eri and muga.

It is however, disheartening to note that we have not yet been able to fully exploit this advantage and make our presence felt on the international scene more prominently than at present.

For this, one has to clearly understand the strengths and weaknesses of different segments of this sector. The strength of this industry lies in its wide base, the sustaining market demand pull especially from the Indian handloom weaving sector, the infrastructure created by the national sericulture project and the research and training capabilities. Mulberry segment

Its main weakness is related to a poor database, diverse range of practices leading to a divergence in productivity and quality. Generally, there is weak accent on quality consistency in production, poor transfer of technology to the decentralised sector both due to poor technology absorption and poor/inadequate follow up on laboratory findings; poor market linkages barring in Karnataka, a thriving unfair trade in the post-yarn sector, low-end technology use and reluctance to costlier technologies due to fears that there might not be corresponding improvement in price realisations.

Other weaknesses are inadequate emphasis on quality in the commercial seed sector, neglect of marketing linkages and the need for a basic perspective for development of the sector which clearly defined relative roles for the central and state agencies under the federal set-up. Among non-mulberry silks, tassar is mostly produced by tribals by rearing silkworms on forest plants. India is the largest producer of tassar silk after China and is the only producer of golden muga silk. Also, India is a major producer of eri silk. Unlike mulberry silk production, non-mulberry silk production is unsteady and fluctuates from year to year.

The central silk board has not given enough attention to their R&D and extension activities in the area of non-mulberry sericulture in spite of its potential to directly help the poor. Presently, muga and eri silks are produced mostly for self-consumption. But with their uniqueness to India, they have great potential for value-added exports. The government must give to these varieties of silk the importance that is due to them and facilitate focussed R&D, targeted extension and innovative product development for value-added exports. Tassar

It has been noted that the following are the areas of weaknesses in production of tassar and they require to be set right . Rearing is done outdoor on trees; natural food plants are dispersed over large areas. Thus, comprehensive extension support would entail a large number of extension agents to cater to the farmers beyond their resources. . Also weavers are normally reelers and are not exploited by traders. . Oak tassar culture has not yet been properly adopted, as people are new to this culture and economics are yet to be established. Also lack of disease monitoring and of control measures is noticed.

Eri silk which is largely produced in some eastern parts of the country has specific thermal proprieties. It can also be blended with wool, other silks, cotton ramie, jute or synthetic fibres. Areas of weakness in eri silk include:- . Lack of systematic supply of adequate quantity of foilage. . Lack of scientific method to check diseases . Poor management during rearing . Non-availability of separate rearing house and . Absence of any well-organised marketing system Muga

This golden yellow silk is quite unique to Assam and neighbouring areas of Nagaland and Meghalaya. It has spread to West Bengal and Andhra Pradesh as well. While basic seed production is more or less organised, commercial seed production is to be organised systematically. More research support is needed for this activity. Cut throat competition from China Sericulture in India has taken a severe beating with cheap silk coming from China and flooding the Indian markets. India imported around 9,258 tonnes of silk worth over six billion rupees last year from China, the world’s largest silk producer.

Nearly 49,000 hectares of mulberry crop was uprooted in Karnataka as cocoon prices crashed resulting in a loss of 3,000 tonnes to the country’s overall silk production, according to statistics released by the Central Silk Board. Dumping of silk yarn from China has affected the production of silk because the rate of cocoons in the market has come down because the demand has been reduced due to import of China silk. So farmers who were expecting a better income for their cocoons stopped because market was fluctuating. When the imported silk came in, dealers lost their interest in buying the cocoons and farmers did not get the better rates.

This has resulted in 49,000 hectares of mulberries being uprooted in Karnataka. In turn the farmers have taken up other activities, other agricultural productions rather than continuing with mulberry. According to the farmers, their crops also suffered from the third consecutive drought last year. Farmers are demanding that the government should impose anti-dumping duties on Chinese silk. India stands second only to China in silk production. While China produced 69,000 metric tons of raw silk last year, India stood far behind with 16,000 metric tons.

Officials say India requires 120,000 metric tons of silk to meet the demand in world market and with better infrastructure facility; the sericulture industry could improve its productivity to 15 percent as against the current nine percent. Conclusion The bulk of Indian silk thread and silk cloth is consumed domestically. The present market context for silk in the country is one of vigorously growing internal demand for silk fabrics, with growth rates of above 10 percent per year. With substantial government and international subsidies for silk projects and marketing schemes, the industry has been expanding rapidly over the last few years.

Silk exports too are growing rapidly. Germany is the largest consumer of Indian silk. Today only China and India are the producers in silk. Thailand, Uzbekistan also produces silk but the quantity is very small. So we will have to keep this raw silk and fabrics for them to continue in the market. Only two countries can do it. India is the largest consumer of silk fabrics by way of sarees and so many other things. So we will have to improve our silk culture. Today the Indian silk industry is already a major player in the global scenario and the growth prospects for the industry seem to be bullish.

Measures like the encouragement of further technological and economic research in the various aspects of sericulture, standardization and quality control of silk and silk products and rationalization of marketing and stabilization of prices of silk cocoons and raw silk it could expand rapidly than ever before. Fibre2fashion. com- Leading B2B Portal of Fashion, Textile and Apparel Industry offers Free Fashion Articles, Free Fashion Trends Articles, Free Industry Reports, Free Articles, Free Fashion Designers Articles, Women? Fashion Tips, Fashion Tips Free Fashion Case Studies and Fashion Market Country Reports ? submit your reprinted articles, featured articles free and get advantage of largest community of textile apparel, fashion and retail industries. To read more articles on Textile, Fashion, Apparel, Technology, Retail and General please visit www. fibre2fashion. com/industry-article If you wish to download/republish the above article to your website or newsletters then please include the “Article Source?. Also, you have to make it hyperlinked to our site. 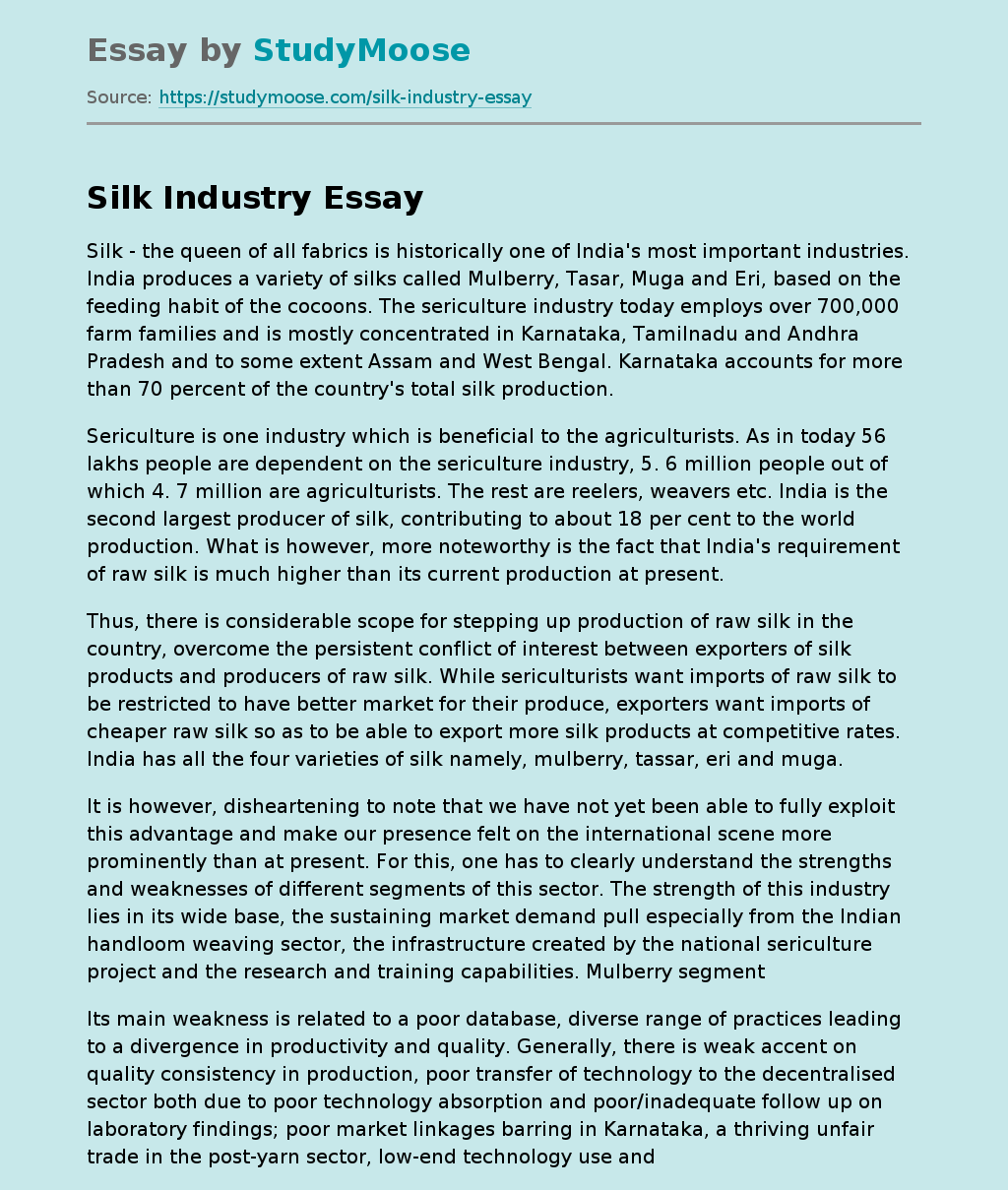