The written text and photograph for Judith Ortiz “Silent Dancing” reflects back on Cofer’s unhappy confusing childhood. Cofer recalls most of her memories from a silent video; both the story and photograph paint a garden of grey memories of isolation, unsettling situations, the struggles of assimilation, and the sadness she experiences as a child. My goal of this essay is to compare and explain the similarities of Cofer’s text to the picture on the book cover of her book.

Don't use plagiarized sources.
Get Your Custom Essay on Silent Dancing Just from $13,9/Page

Cofer’s written text and photograph convey very similar ideas about the difficulties of assimilating to an unfamiliar culture. Many times throughout the text Ortiz references the color grey, symbolizing a sense of unhappiness. According to Ortiz, “That single color washes over the whole period” (68). The photograph being in a bland sephia tone, suggests the sadness Ortiz experiences through the difficulties of adaptation while growing up in New Jersey and throughout childhood.

Julia 2
Cofer’s text expresses a sense of isolation while growing up in the El building.

In order to assimilate to America, her father was fixated on getting the family out of the barrio (70). Since majority of the tenants were Latina, Cofer “Was never permitted to form bonds with the people who lived there” (70). The barrio, where Cofer lived, became a place of quarantine. Due to the guilt of isolating the family, Cofer’s father celebrated Christmas with a real tree, and buying a television. The television shows acted as an example of how American culture ‘should be’ and how they ‘should act’. Cofer’s photo suggests this same issue of isolation. In the photo she is inside and looks disconnected and uninterested in the toy she is holding, and possibly longing for attention from the photographer. In the story Silent Dancing there are several references to unsettling situations Cofer faces.

Cofer relays a dream she has from this New Year’s Eve memory and the short film. Her dreams reflect the silent dancers by gliding forward and back to her face, as they were with the camera in the home video. She questions them for answers that no one could or would give her an explanation to in the past. Ortiz remembers she saw her mother “Hold a baby doll up and say ‘It was this big when she flushed it down the toilet'” (74). According to Cofer, this is an image that haunted her for a very long time. One misconstrued old woman from her dreams sheds some light on her questions. Claiming she is her aunt, she learned of her cousin being pregnant, and then notions of her than killing the child were true. The runaround was that her cousin was Julia 3

corrupted by the American culture, and ended up getting sent to live in Puerto Rico. In the end, Cofer’s cousin embodied what she was striving to achieve: a ‘La Gringa’ (74). The downside was that the connotation she was marked with was not the one she had hoped for. The photograph expresses a sense of fear of Americanizing herself and becoming the ‘La Gringa’ her aunt spoke so poorly about. The photo also displays the demoralization Cofer experiences as a child. Cofer’s eyes looked haunted with disorientation and sadness. Confused on what to make of all the adult conversations hears, Cofer experiences an anxiety of puzzling memories from her past and is forced to use her imagination to fill in the blanks. In consonance with Cofer’s confusion, in her poem Lessons from the Past, Cofer states, “Things changed, and some nights he didn’t come home.

I remember her crying in the kitchen. I sat on my chair learning how to count uno, dos, tres.” With one parent wanting to assimilate and the other wanting to remain the same, Cofer felt unsure of which way to lean. Cofer’s mother tried hard to maintain her island heritage; she always viewed herself as being in temporary isolation. She held fast to the traditions and family values she knew well. Cofer’s father, on the other hand, thought that in order for his children to have the best educational and career opportunities, he had to fight hard to disassociate himself from his beloved island. This disconnect is expressed through the dull, sad, empty look on her face. These two opposing worldviews created a disconnect that Cofer attempts to resolve through her writing.

Julia 4
On top of her confusion and difficulties in assimilation Ortiz encounters many differences between Puerto Rico life and the barrios. She was used to the ‘single family’ living, and was forced to keep quiet and watch television. The television helped to Americanize the family. Having a television set them apart from the rest of the community; other women envied their economic status and considered them rich. The photograph displays Cofer’s wealth as she sits in a beautiful Sunday dress. The level of wealth coupled with her ethnic background made it difficult to fit in and assimilate to their new life in Jersey. Cofers story weaves a recollection of memories while the photograph reflects the hardship and shows her emotions. The dreams act as a manifestation of fears and unanswered questions. The dreams may answer some of the questions Cofer has had, yet she is dissatisfied. The distorted people in her dream echo the old woman’s last words- La Gringa. She relates the people in her life to the silent dancers, circling in their dance and always keeping silent while her dreams tell her the answers. The photograph exudes confusion, isolation, and difficulties in assimilation. All which come at a time when Cofer is too young to piece together the big picture. 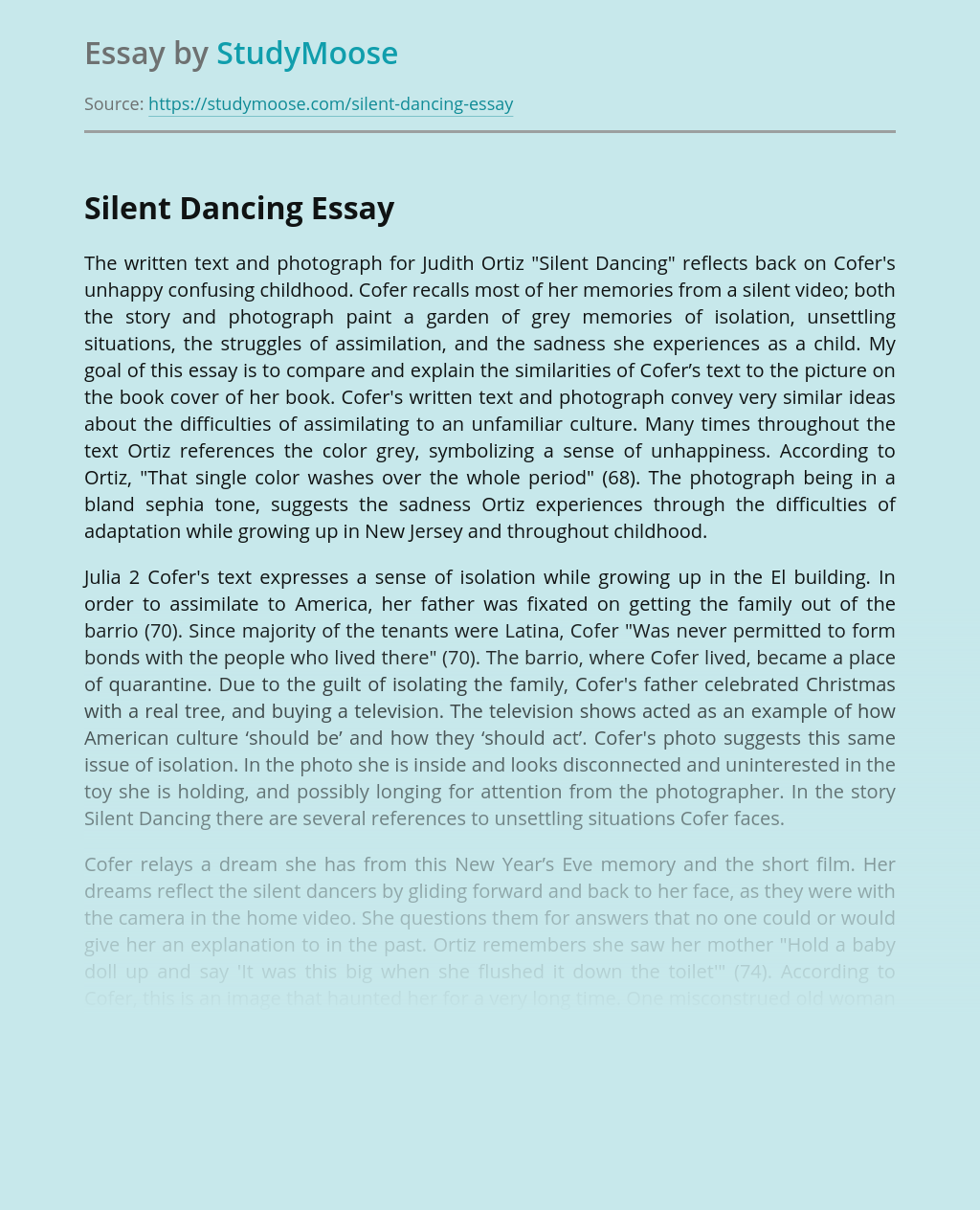 The correctional subculture has various ethical questions pertaining to a correction officer and his duties. According to Thomson and Wadsworth (2005), when an officer makes the decision to reprimand or write a disciplinary report, he is playing a role in the Criminal Justice System (p. 316). A disciplinary committee also has a dilemma because he,... VIEW ESSAY

Do you understand what I am doing? (thumbs up to the side– Hitch hiking). When I do this, the majority of you would think it indicates “excellent job”. However in the middle east, for instance in Iran, it’s an insult similar to “the middle finger”. Great evening Madam Toastmaster, fellow toastmasters and guests, tonight let’s... VIEW ESSAY

View sample
Get Essay
Should College Athletes Be Paid

Why College Athletes Should Be Paid $53.4 Million the combined salary of the top 15 paid coaches in division 1 college football, $0 the combined salary of all student-athletes. Over the past few decades, college athletics have gained popularity across the United States. Whether it is football, basketball, or baseball, ever since the turn of... VIEW ESSAY

In the last 50 years or so technology had contributed to the exponential growth of the mass media where what started out with the telegraph was subsequently followed by the radio, the newspaper, magazines, television and the new arrival the Internet. The outcome of all these subsequent introductions had made society to be dependant on... VIEW ESSAY