In the book Silas marner, George Elliot uses many themes to bring the book alive and also to grasp the reader’s attention. Silas marner is written by a woman who named herself George Elliot as a mean to publish her novels. Themes are used in this novel to portray what George Elliot was trying to show the readers. One of the themes in Silas marner is class; being centered on two households, marner’s cottage by the stone pit and the Cass marner, the red house, these two settings represent class extremes.

Don't use plagiarized sources. Get your custom essay on
“ Silas Marner ”
Get custom paper
NEW! smart matching with writer

The cottage is showed as the ramshackle abode of the lowest member of raveloe society; the manor is a beautiful home filled with gentry and a location for dances. Elliot shows many intersections between the two households. Dunstan Cass, who is a member of the upper class, enters marner’s home looking for money. Silas marner who is from the lowest class and miserable, raises a squire’s granddaughter as his own child, despise the fact that she is from an upper class family.

The rainbow tavern and the church in raveloe are also places where class differences are present.

The rainbow is a different place when the “gentles” are having a dance (ch. six). In these times, the lesser villagers like mr. Macey, reign over the rainbow, telling stories. Secondly, at the church, the higher members of society sit in assigned seats at the front of the church while the rest of the villagers sit in the back and watch.

In both these places, although everyone recognizes the status differences between the lower and higher class, this doesn’t not seem to be a problem in raveloe.

In raveloe, strict boundaries of class do not necessarily lead to greater happiness among the higher classes. Those with money or those who have a little money tend to be the most harned and corrupt characters, such as Dunstan, Godfrey and even silas, before he found Eppie. The person in silas Marner who is most oppressed by circumstances, is Godfrey Cass, who finds himself at the mercy of a lower class wife, who fails to have children of his own and ends up envying the bond of a lowly weaver and his daughter.

Instead they suspected Jem Rodney, a low class peddler. Why did they suspect him and not someone from a higher class? Because being in a higher class, no one ever thinks you would do something like steal from a miser. Only because the higher class portrays an image as to having it all and are happy and perfect. Dunstan Cass is a clear example that even though you are in a higher class, you have that one person who does not uphold the standards and stoop lower than a lower class person would.

Another theme of silas Marner is the nature of chance, and perhaps the only inference one can make about chance as read in the novel is that chance cannot be trusted. Everyone has good or bad turns but we never know which is which until later in life. Take into consideration when silas loses his gold, he thinks it is the worst thing that could ever happen to him. When you think about this, you realize it was one of the best things to happen to silas because losing his gold gave him a clear space in his life to love and take care of Eppie like she was his own.

Looking at godfrey cass, he believes the death of his first wife and marner’s subsequent adoption of his daughter, was an amazing stroke of good fortune, but as we read and realized it turns out to be horribly the worst in the end. He ends up wanting his daughter Eppie in his life more than he wanted Nancy. Godfrey realizes it was wrong to pretend that Eppie was not his child, which he paid for in the end. We realize that chance is not so random after all but guided by the author. The characters end up meeting their faith, the good were rewarded or ended up lucky, while the bad were unlucky or punished.

For instance Godfrey stated that he “passed for childless once” because he wanted to and, unfortunately, he “shall pass for childless now against his wish”. Even so, the novel also reflects the complexity of reality, and chance serves this purpose as well. Near the book’s end, the wise Marner says, despite his perfect happiness, “Things will change, whether we like it or not; things won’t go on for a long while just as they are and no difference”. Which means pain will come, joy will come, and no one can learn from each revolution of the wheel fortune. 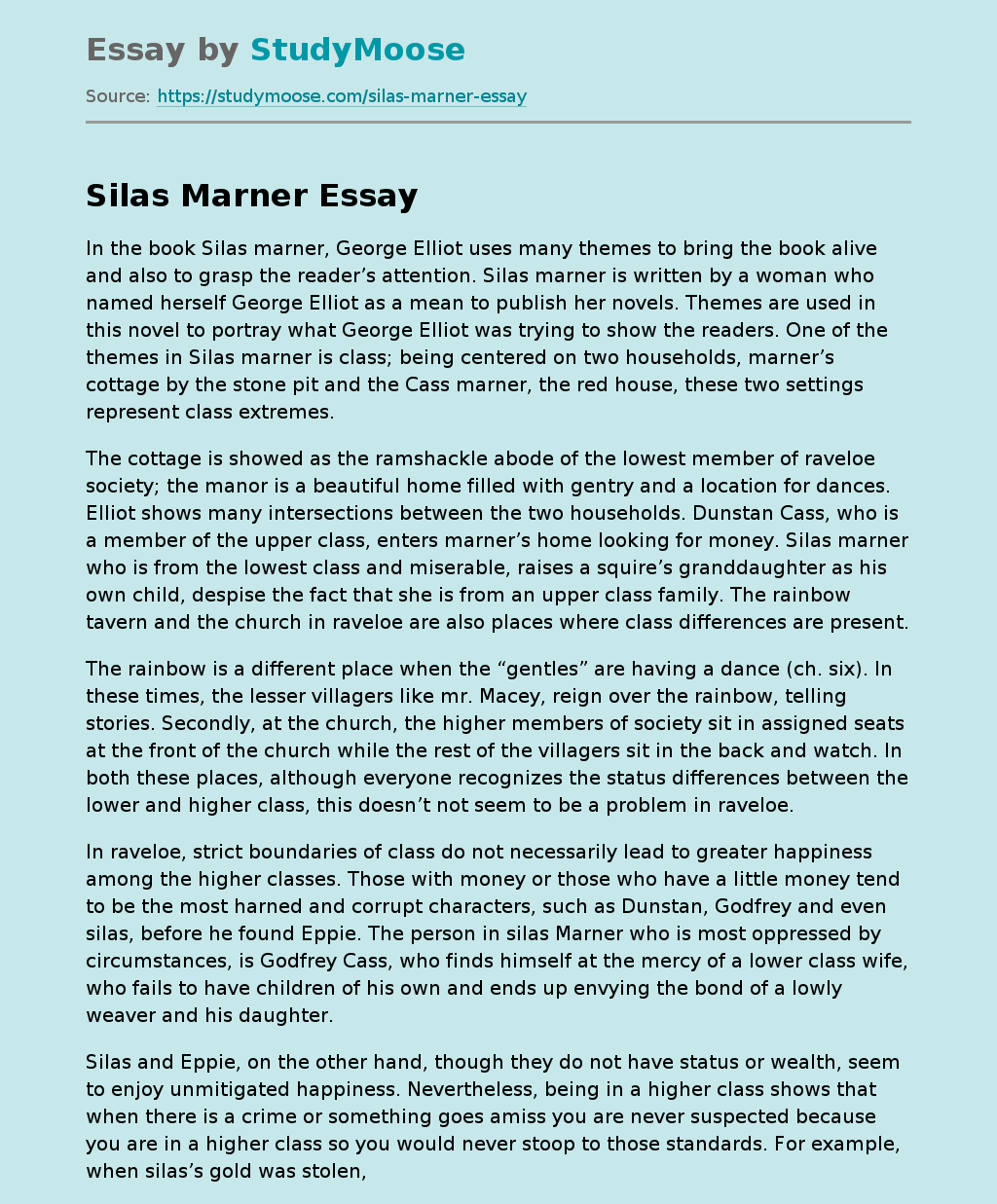