Significant Changes and Continuities in East Africa Between 600 and 1450

Substantial changes took place in East Africa in between 600 and 1450. Specifically, the increase of slave trade and much better, more useful technologies through the Indian Ocean Trade Network. These modifications are essential since the growth of city-states occurred due to this network. Throughout this period, the general trade of the area stayed relatively continuous. This continuity was crucial due to the fact that it enabled economic and technological development to grow in the area.

Safer travel, calmed routes, higher volume of trade, increased effectiveness, much better quality of items, boost of slave trade, better, more beneficial innovations, new farming items, more combination of all individuals, use of banking and fiat money, distance of travel, usage of trade for diplomacy, and the spread of Christianity and Islam.

Don't use plagiarized sources. Get your custom essay on
“ Significant Changes and Continuities in East Africa Between 600 and 1450 ”
Get custom paper
NEW! smart matching with writer

Much more extensive use of the Indian Ocean, and in general increased trade reaching more locations, like sub-Saharan Africa and northern Europe.

Slavery grew to a much larger scale as African servant trade established an extensive system. Numerous servants were exported that there were African slave revolts in SW Asia. Bantu migrations caused advancement of states to organize labor in Africa. Development of city-states along the East African Coast as Indian Ocean trade started to increase.

According to Ways of The World, these city-states, such as Mogadishu, Sofala, and Kilwa ended up being crucial areas of trade and for interaction of ideas.

Merchants traded gold, slaves and ivory for pottery, glass wares and textiles. Individuals began utilizing paper currency, an idea brought in by Islamic people. There was a big increase in the quantity of maritime trade and cross country trade. Better navigational innovation, such as the magnetic compass, provided an increase in technological advances. The Indian Ocean is among the earliest trade paths between Africa and Asia.

During the early days of Indian Ocean trade, the buying and selling of goods took place only between the Swahili people living in East Africa and Arabs from Asia. Indian Ocean trade was made easy by the monsoon winds that circulated between Asia and the Eastern coast. These winds blew north to the south and from the south back to the north in a circular fashion. These winds change direction with the change of seasons. In the ninth century an astrolabe was introduced to the Islam world by the Greeks.

An astrolabe was helpful to the Arabs because it helped them find direction to the east coast and the most suitable time for making the return trip to Asia. The trading systems were still, in general, the same. They were used to spread luxury goods, metals, stones, religion, diseases, philosophy, technology, agriculture, agricultural goods, use of nomads as middlemen between east and west, and the same basic routes. Improving trade networks continued to be the main source of technological development because technologies spread quickly from their origin along the silk roads and Indian Ocean to other lands.

Necessity is always a main source for innovation, so agricultural developments are common as populations increase. Agriculture remained the occupation of a majority of the world’s population, even as improvements in technology provided surpluses freeing up specialists. Slavery continued to be based on warfare and debts. Slave trade became more prominent, but slaves were not taken for their race, because they were taken by people of their own race. The post-classical peoples kept using agriculture as their main source of food and as the basis for their economies.

They altered the shape of the land to be more effective for agriculture. Urban areas still destroyed the natural ecosystems. Roads still disrupted the plains. They kept creating dikes and irrigation systems. Growth of powerful states in Africa made it possible for stronger states to prey on weaker ones for slaves, which had become a profitable good at market. Increased agricultural production explains the development of new animal power technologies like the horse collar. The watermill and the development of guilds for artisans can also be attributed to rising agricultural surplus.

As stronger states grew, it was possible to organize projects like expansion of the Grand Canal and magnificent buildings like cathedrals and mosques that were not possible in the chaos of the dark ages. Evidently, East Africa had several changes including the more extensive use of the Indian Ocean Trade Network along with the easy trade of slaves. On the other hand, there were elements of East Africa that stayed the same over the years, seen in overall technological and economic stability of the trading system.

Significant Changes and Continuities in East Africa Between 600 and 1450. (2016, Sep 26). Retrieved from https://studymoose.com/significant-changes-and-continuities-in-east-africa-between-600-and-1450-essay 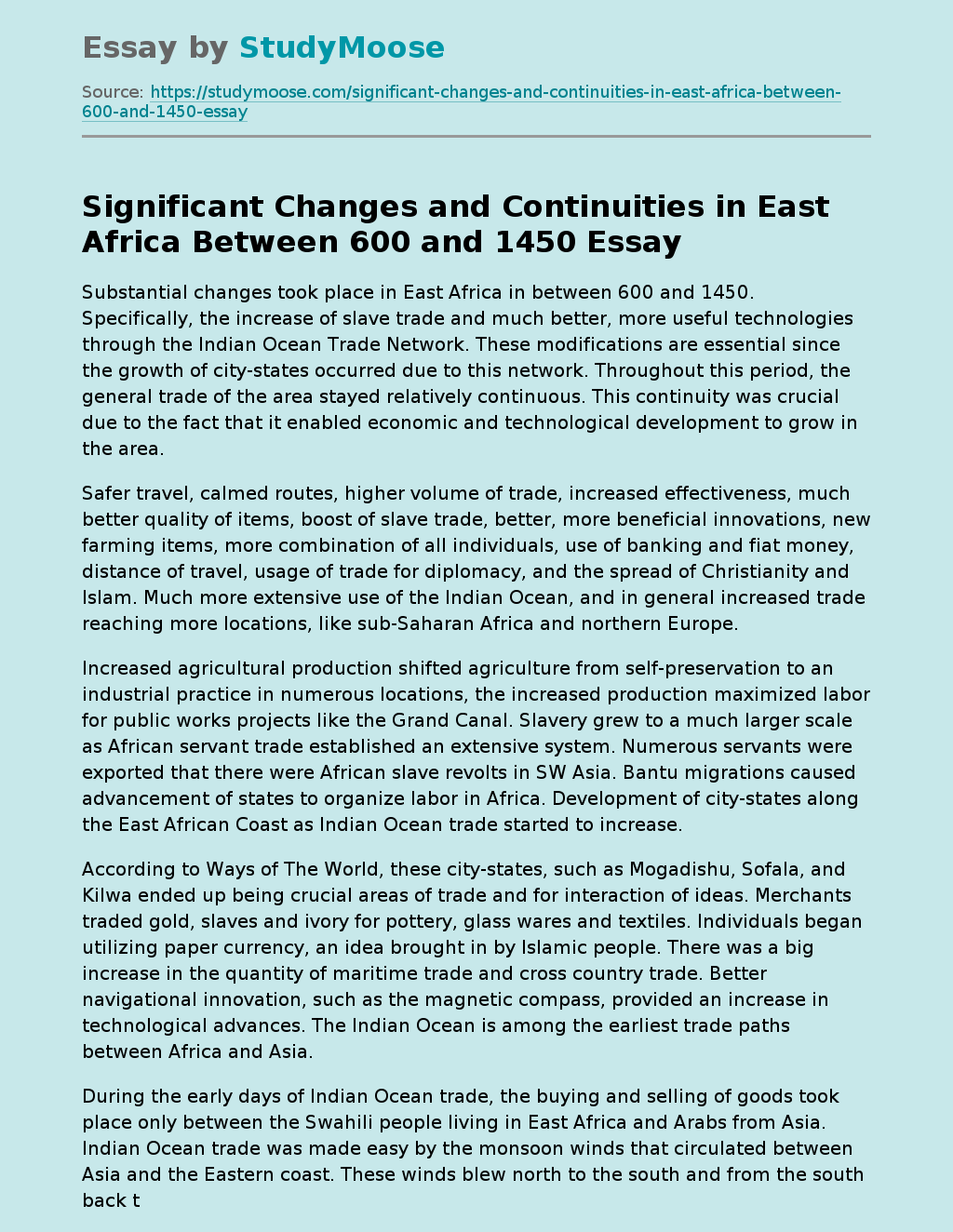