Significance of Vimy Ridge For Independence of Canada

Vimy Ridge marks the day that Canada became an independent nation. The significance of the battle was not in the actual battle itself, but rather the effects that Canada would feel nationally afterwards. The objective was a ridge that ran from the northwest to the southwest between Lens and Arras, France. The main height of land was four miles long, with it’s highest point only 475 feet above sea level. The Germans had held it since 1914, and three French attacks in 1914 and 1915 had failed to dislodge them.

Don't use plagiarized sources. Get your custom essay on
“ Significance of Vimy Ridge For Independence of Canada ”
Get custom paper
NEW! smart matching with writer

Canadians thought up of new skill tactics which helped Canada win the battle. Many of the soldiers who fought at Vimy Ridge astonishingly had no previous war experience. Winning this battle granted Canada with world recognition, as well as pride. For the Canadians the battle would prove to be significant during World War 1.

The Canadians tried different tactics than the Regular British Army and ended up winning. “All soldiers knew the tactics and the plan to take Vimy” (Adrine 201) Arthur Currie tried different tactics, he made a replica of the battle grounds for the soldiers to train in, all the soldiers knew the plan, and were instructed to use the Vimy Glide, which was a tactic that Arthur Currie thought up of.

The Vimy Glide was a tactic where all of the soldiers would move 100 yards every 3 minutes. “We have shown that even in trench warfare it is possible to mystify and mislead the enemy.”(Adrine 311) With good tactics, Canada ended up winning, they took Vimy within 4 days.

France and Britain had previously attempted to take the ridge, but failed to do so. “This was the first time Canadians had an influence on WW1.”(Barton 56) On April 2nd, the bombardment was stepped up, this period was called “the week of suffering”. There were very few German survivors, proving how successful Canada was. This was also the first time Canadians planned an entire attack.

Most of the men that fought at Vimy Ridge were Citizen soldiers. “The men at Vimy were from factories in Central Canada, prairie farms, and east and west coast fishing boats.” (Adrine 601) This was extraordinary because these men fought in extreme conditions without any previous battle experience and still won. The men had to endure the most terrible conditions, which included rats, lice, mud and more. “Borden realized how many soldiers were needed in order to win Vimy Ridge, and so forth came conscription” (Adrine 371). Borden saw how small his army was, he was in need of more soldiers, therefore he made the conscription law, even though he promised the country he wouldn’t.

Instead of only telling the field general the plan, it was Arthur Currie’s plan to inform all the soldiers with what the plan of action was. “Take time to train everyone” (Barton 82) was Arthur Currie’s plan. Arthur Currie built a replica of the battle field for the soldiers to train on. Soldiers were also informed where the enemy soldiers and bombs were expected to be. Arthur Currie came up with the Vimy Glide, soldiers were expected to move 100 yards every 3 minutes. Tunnels were built under Vimmy Ridge, which were the size of Vancouver. A lot of this work was done by ordinary men who had no previous experience whatsoever, proving how significant Vimy Ridge truly was.

Winning Vimy served as a focal point for national pride and helped create a sense of collective and Canadian sentiment. “It was Canada from the Atlantic to the Pacific on parade. I thought then that I witnessed the birth of a nation.” (Barton 162). Winning Vimy Ridge gave Canada independence due to the fact that other allied countries tried to win Vimy Ridge, although ended up failing. Canada on the other hand, tried different tactics to win the battle. Winning Vimy Ridge showed the world that Canada doesn’t need Britain’s support in order to win a battle, or support citizens, and so forth. As a military battle, made up of Canadian troops, it started the collective pride that went towards shaping Canadian independence. 19 years later, the  monument was built.

This monument showed that there was much hard work put into it, the monument makes Canadians feel proud of Canada’s accomplishment, “Whenever I visit the monument, I feel a sense of pride.” (Adrine 221) The two pillars at the memorial represent Canada and France. The Vimy Memorial stands on hill 145, overlooking the Canadian battlefield of 1917, at one of the fiercest fighting points. Walter Alward was the artist, he spent 14 years in France carving the memorial sculpture, the artist spent a lot of days building the monument, proving how significant it is. The monument definitely represents how important the battle of Vimy was.

When the battle was over, Canada had impressed the world and became an independent nation. Arthur Currie became the head of the Canadian arm and was later knighted as Sir Arthur Currie. Loss of the ridge exposed vast territory of the German held positions to allied sight and allied guns. Vimy Ridge was the “hinge” of the German line as it protected the newly constructed Hindenburg line and the length of the western front as it travelled north-west into Flanders and on the channel. Arthur Curries tactics turned out to work. With the army being inexperienced, the tactics proved to be one of the main reasons why Canada won Vimy Ridge. This brought Canada a great sense of pride, and created a sense of collective and Canadian sentiment. It’s clear that this significant battle marked the day that Canada became a country as well as an independent nation.

Significance of Vimy Ridge For Independence of Canada. (2016, Nov 04). Retrieved from https://studymoose.com/significance-of-vimy-ridge-for-independence-of-canada-essay 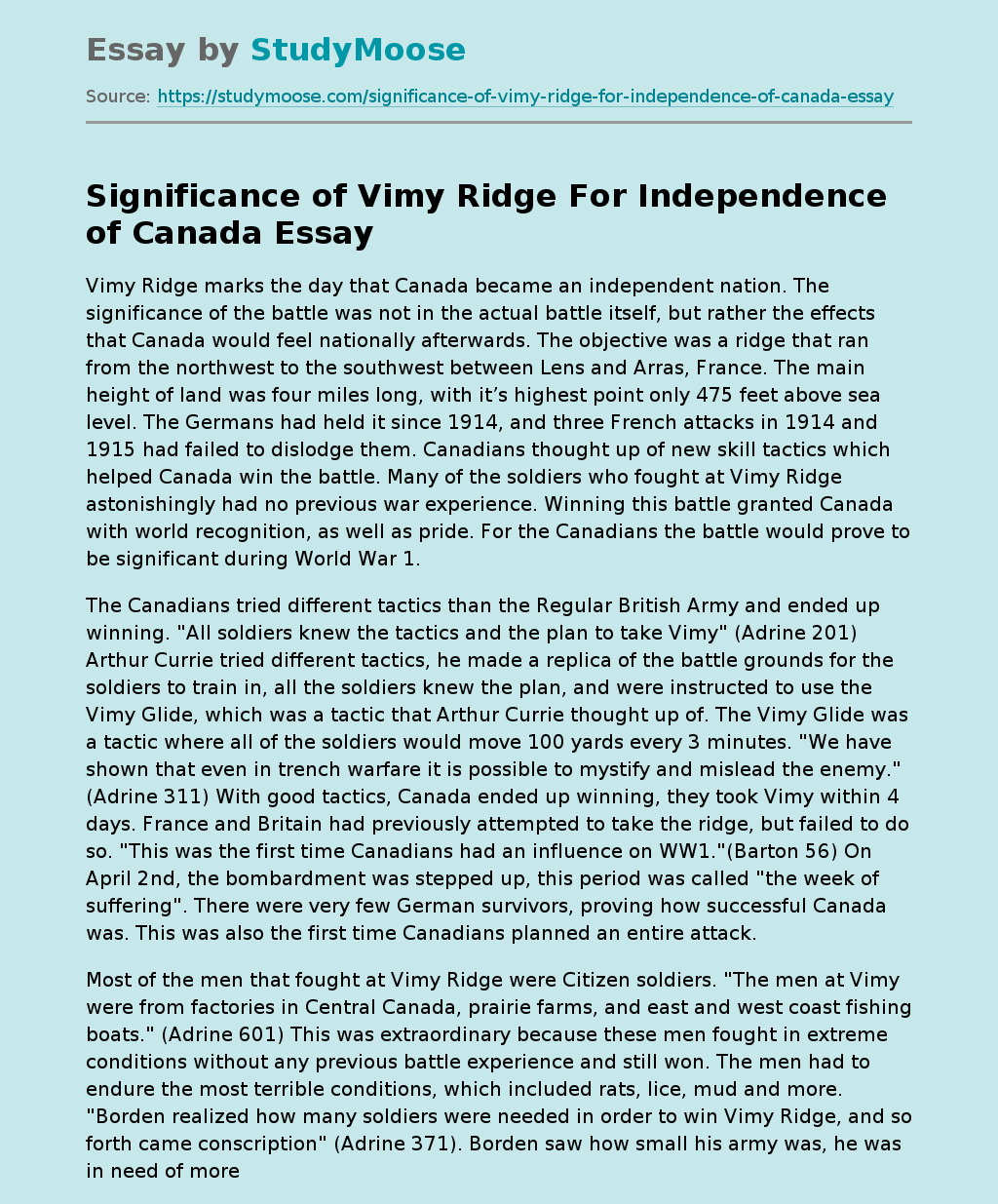