1. Corruption was deeply embedded in Siemen’s business culture. They rationalized this corruption by stating that it was not illegal to initiate bribes to government officials. This was true, however not anymore, the law changed in 1999 prohibiting such acts of corruption. 2. If a manager at Siemens would have stood up and took a stand against corruption, I think that he/she would have most likely been fired for being insubordinate. The higher executives that were promoting such bribery would have wanted these managers to go along with what they were doing.

The manager could have also been demoted possibly, or just plain and simple reamed out by the higher executives. 3. Siemens spent extra money to secure future business investments. This in, in turn, means that other companies, even ones that might have an advantage, lose business opportunities. The entire concept of such corruption completely disregards competition, because it simply removes it, unless other companies also engage in bribery. 4. Some economists argue that doing such practices such as bribery is the price that must be paid to perform a greater good.

They support this claim by stating that it can promote efficiency and growth in countries that have pervasive and cumbersome regulations, and may also enhance welfare in countries that have preexisting political structures that distort the workings of the market mechanism. On the other hand other economists argue that the bribery could reduce the returns on business investments and lead to low economic growth. 5. I think that there are two ways to approaching this.

The first is more of an obvious response, and that is to immediately take action to prevent further corruption to to obey all laws prohibiting such acts, even if that means to pay fines to resolve past corruption. The second approach, more realistic, is that I would take into consideration all of the effects that would occur if immediate action was taken place. Having the stress of thousands of people’s jobs at stake. And a loss of thousands/millions of dollars in business.

The fact of matter is this, if I were a manager in the Siemens situation I would have already been well aware of all of the corruption, and therefore a promoter of it as well, which then means that I would keep doing business as is. However this does not mean that I support corruption by any means, but there are given circumstances in the situation, and I think that what I stated previously is a fair judgement. 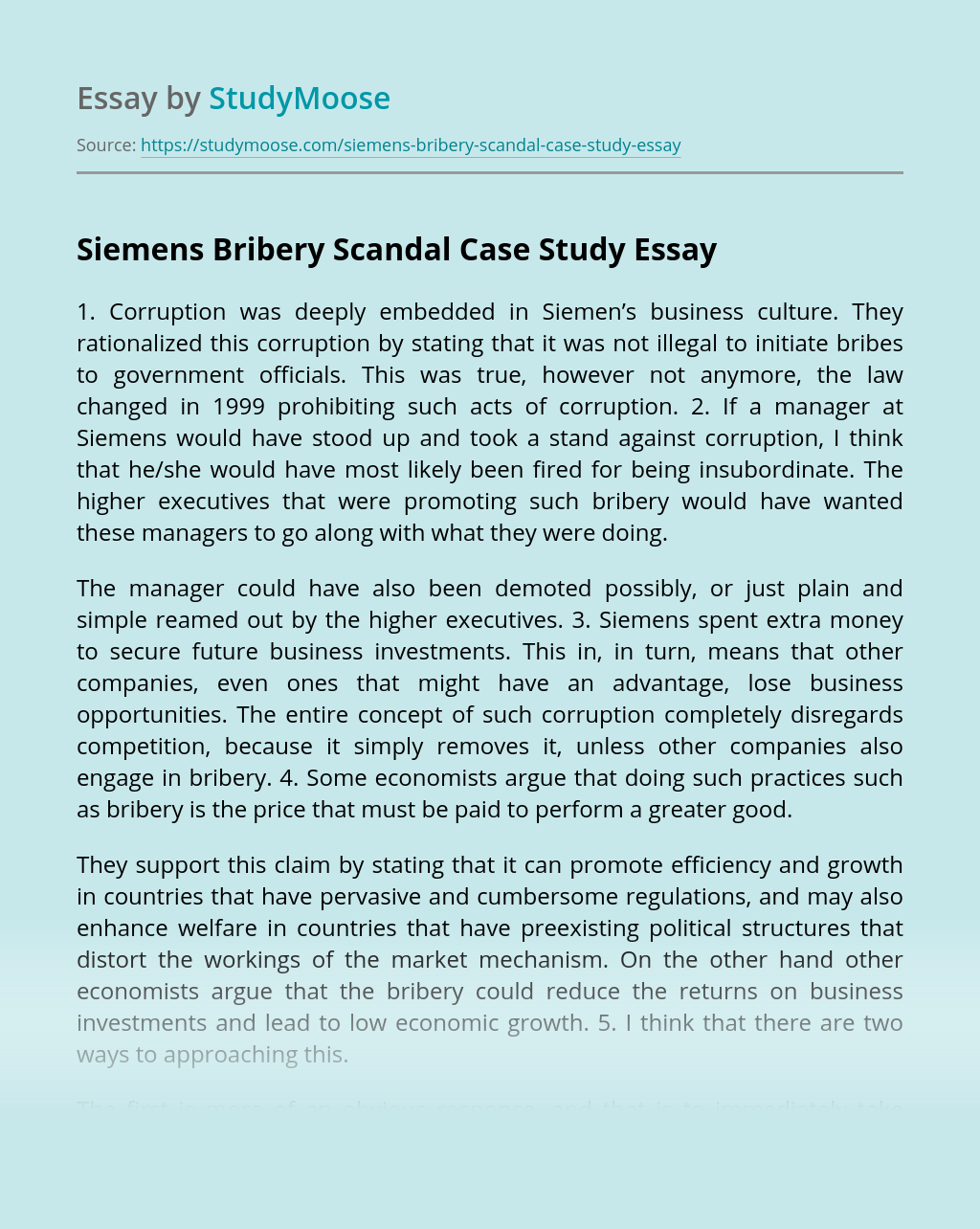 View sample
Hyperreality in the Context of Postmodernism

Firstly I am going to examine the terms of hyperreality and begin to put it into context in terms of Postmodernism. In order to fully understand the true meaning of hyperreallity I want to look at the roots of the word ‘hyper’ and ‘reality’. The word hyper is commonly referred to energy and excitement, for... VIEW ESSAY

1987 . But six yearsafter it has reimposed the death penalty, the Philippines has overtaken its Asian neighbors and hasthe most number of death convicts.Within less than a year, however, the military establishment was lobbying for its reimposition as ameans to combat the “intensifying” offensives of the CPP/NPA guerrillas. Gen. Fidel V. Ramos, thenChief of... VIEW ESSAY

Kid marital relationship is India is an essential human rights offense due to the fact that many women are suffering throughout their marital relationship. Ladies’ ages 3-18 marry older men ages 30-80. Parents send their daughters to get wed because they require money to help their household. It is very dismal to see girls marry... VIEW ESSAY