Siemens AG will be subject to legislation in any country within which they are operating. With the head office in Germany they are subject to German and European corporate law. In the U.K Siemens must obey English legislation specific to that market. For example The Trades Descriptions Act, which states that a company may not falsely advertise any of its products or services.

Also effecting the company’s operations in Britain are the Sale of Goods Act and the Consumer Protection Acts that enable the consumer to have certain rights if they are supplied with faulty or damaged goods.

As a multinational company Siemens will be subject to the fiscal policies employed by governments within a number of countries, furthermore when products are being sold internationally there will also be import and export controls that will affect the company such as tariffs that must be paid.

Dollar and the euro, because a high percentage of the company’s business volume is conducted in the US and has exports from Europe.

The current conflict in Iraq has caused uncertainty in many world markets. The unstable that has come about as a direct result of this can have an effect on Siemens as they have a wide ranging portfolio that spreads across a number of different markets.

The ongoing Economic downturn has lead to a decreased capital expenditure from clients Siemens business has been negatively impacted by the prolonged economic downturn in a majority of its markets worldwide.

Investment sentiment continues to be weak for the Company’s customers in important industry segments and regional markets in the US, Europe, Asia and South American (Data Monitor). Siemens’ information and communications business is particularly affected by the current market conditions in the telecommunications industry. (Data Monitor)

Lenders have said that are to increase the cost of borrowing due to actions of the Bank of England (Anova.com). When it becomes more expensive to borrow money people tend to spend less this is because they have to pay more back in interest. Disposable incomes fall so therefore there it’s likely that consumer spending falls. These negative knock-on effects can be costly to Siemens sales turnover.

In the modern society people are relying more and more on electrical goods for everyday use. Most people find that there are a number of electrical goods such as mobile phones that they say they could not live without in the modern world. There is a constant updating and changing customer demands for new and improved electrical gadgets.

In 2003 regulators were investigating claims that some Lenders were persuading people to borrow out of their reach. By borrowing more than they can afford a rise interest rates could cause serious financial problems for these people. This means there will be a reduction in purchasing especially of electrical goods that are often seen as luxury goods.

There is a rising number of households in the U.K as an increasing amount of people are deciding to live alone as a result of increased divorce rates or because of an increased number of students living away from home at university. In the short term this could mean increased consumption of electrical goods, which will be good for Siemens as they say ‘ our success depends on the success of or customers’. However in the longer term of things an increased number of households may result in a rise in house prices. This would mean higher mortgage payments and decreased consumer spending.

The 21st century has seen the Internet, email and other technological advancements dominate the business world. Siemens already use there website (Siemens.com) as a tool to aid its development. It is extensive use of tools such as this along with constant technological innovation that are paving the way forward in the modern economy. Maintaining a creative and modern website can ensure Siemens can communicate with existing customers and attract new ones.

Data mining and data warehousing are modern tools to keep up with and identify ever-changing consumer trends of purchasing. These can also be used to ensure repeat custom. Siemens will be adversely affected if they fail to keep up with the ever updating technology that operates with the industries they are involved in. 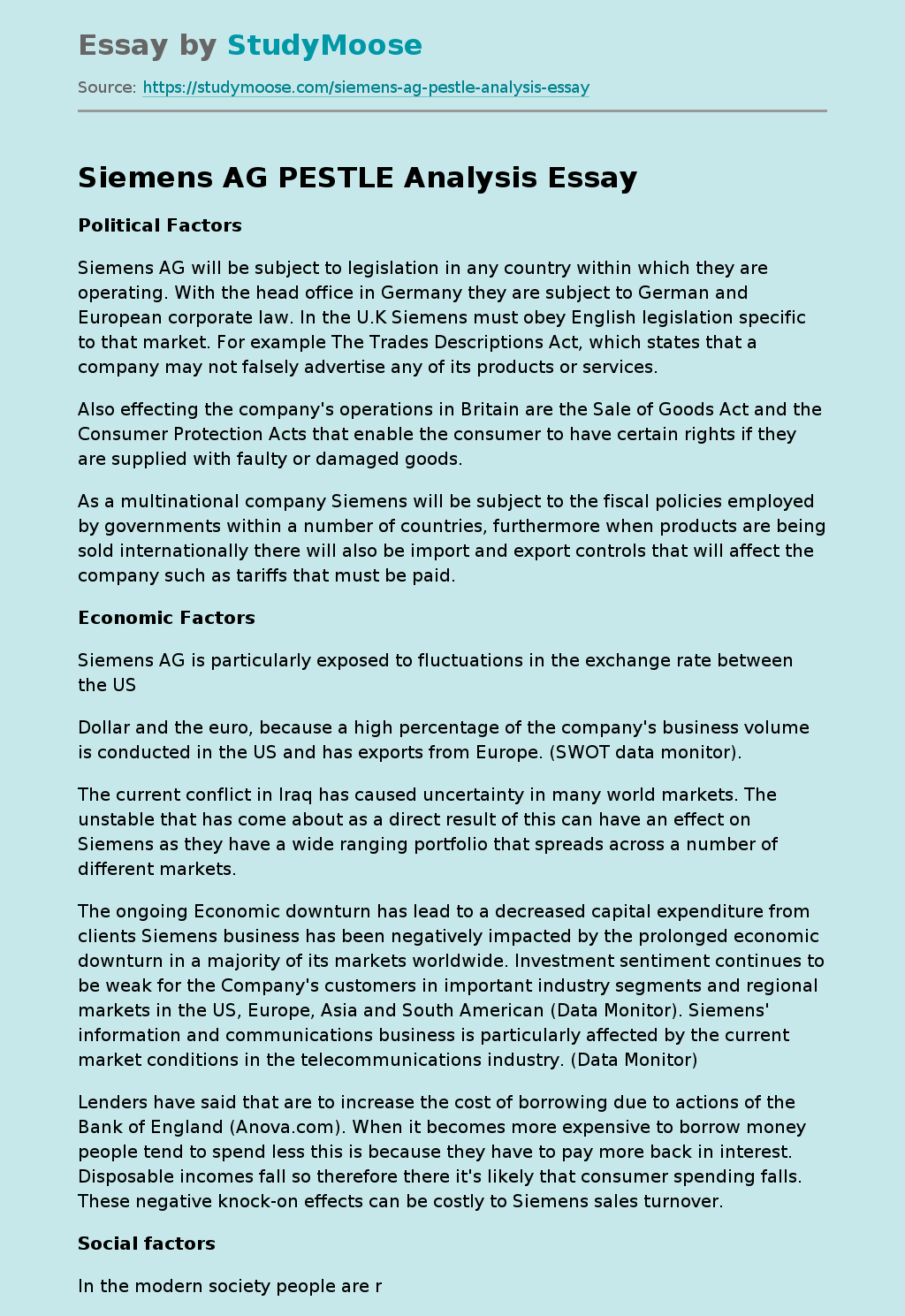