For this essay I will evaluate the potential arrows that direct us to believe that this film was actually intended for adults with the perception of a children’s film. Here I will display the possible arguments for and against the above criticism that will back up both of the children and adult audiences, showing similarities and differences within them and the comparison to other films. The film also demonstrates abilities that combine the audiences together to ensure that all appreciate the content, perhaps less often than expected.

Don't use plagiarized sources. Get your custom essay on
“ Shrek 2 essay ”
Get custom paper
NEW! smart matching with writer

Shrek 2, a computer animated film directed by Andrew Adamson, Kelly Asbury, and Conrad Vernon, is frequently entertaining but is also, just as frequently, uninteresting or even confusing to some fraction of the audience. Shrek (Mike Myers), a large, fat, green ogre with ears like tiny mushrooms and his new wife, the podgy, green ogress Fiona (Cameron Diaz), who had once been human by day and a monster only at night, are invited by her parents, the King and Queen of the Land Far Far Away (John Cleese and Julie Andrews) to visit them in their castle.

Unfortunately, Fiona’s father dislikes the idea of his daughter marrying an ogre and remaining one herself. Hoping to solve both these problems, he conspires with the crafty Fairy Godmother, sends Shrek into the forest, hires Puss in Boots to murder him, and arranges for the Fairy Godmother’s vain son, Prince Charming, to impersonate the absent ogre.

For Shrek 2, relying on tried-and-true pop-culture riffs, fart jokes and cute animals; catered to an audience that is probably more important to an animated film than critics are (young kids) is not why the film has enjoyed more commercial success as a result but because of its capability to deceive two different audiences.

Shrek 2 possesses some hysterical moments that starts slowly and build to a crescendo as it reaches its thoroughly predictable climax.

On the contrary a ‘just kid film’ is not all what Shrek 2 proposes to be. Sure enough this may be the approach but the richly filled content of sarcasm and sexual comments suggests another story that is not so fairytale! It is for this Shrek 2 remains questionable on whether the movie was targeted at children, adults or perhaps both? If it is a film initially intended to target both audiences why make it a PG and not a U? If it was for adults only, surely it should be a 12A, 15 or (I doubt it) an 18?

Is it because of the animation it did not receive this certificate of “grown-up hood”? But South Park did! And if it were just for children… initially there would not have to be any “parental guidance” anyway! In this case Shrek 2 should be examined before drawing a conclusion. The film begins with a typical ‘opening a book nature’ where Prince Charming is telling the story of a so typical ‘Once Upon A Time… Happily Ever After’ fairytale that make children proud in their imagination and adults (in silence) are forced to endure.

It is this first seven seconds of the film that it has a childlike appeal. However, as the camera moves away from the book to the arrogantly spoken Prince Charming (on his narration to ‘rescue’ the already rescued Princess Fiona) in one close up shot he stops to swing his hair in an attention seeking fashion ‘for he was the bravest, and most handsome in all the land’ which set off the first whiff of laughter from both audiences bringing back the universality.

In a close up shot the Wolf seen here is found reading a magazine named ‘Pork Illustrated’ with the front page featuring an image of a posed pig in a bikini. This is a spoof of the swimsuit issue of the magazine Sports Illustrated and relates to sexual values that children would not understand. He comes across as ‘gender confused wolf’, which indicates the humour is for the adults leaving very young children unaware of the joke.

As the film gives a musical introduction in the new life of Princess Fiona and Shrek on their honeymoon; the adult humour does not stop there. And it starts with the jealously of little Miss Mermaid. When Fiona drags her off him she faces her down. This was indicating that the film is still a children film so they chose not to show her topless front. In addition to the handful of movie spoofs a similar upside-down kiss like the one in the film ‘Spider-man’… Lord of the Rings, Ghostbusters and Alien were welcome comic additions that pointed to the young ones. 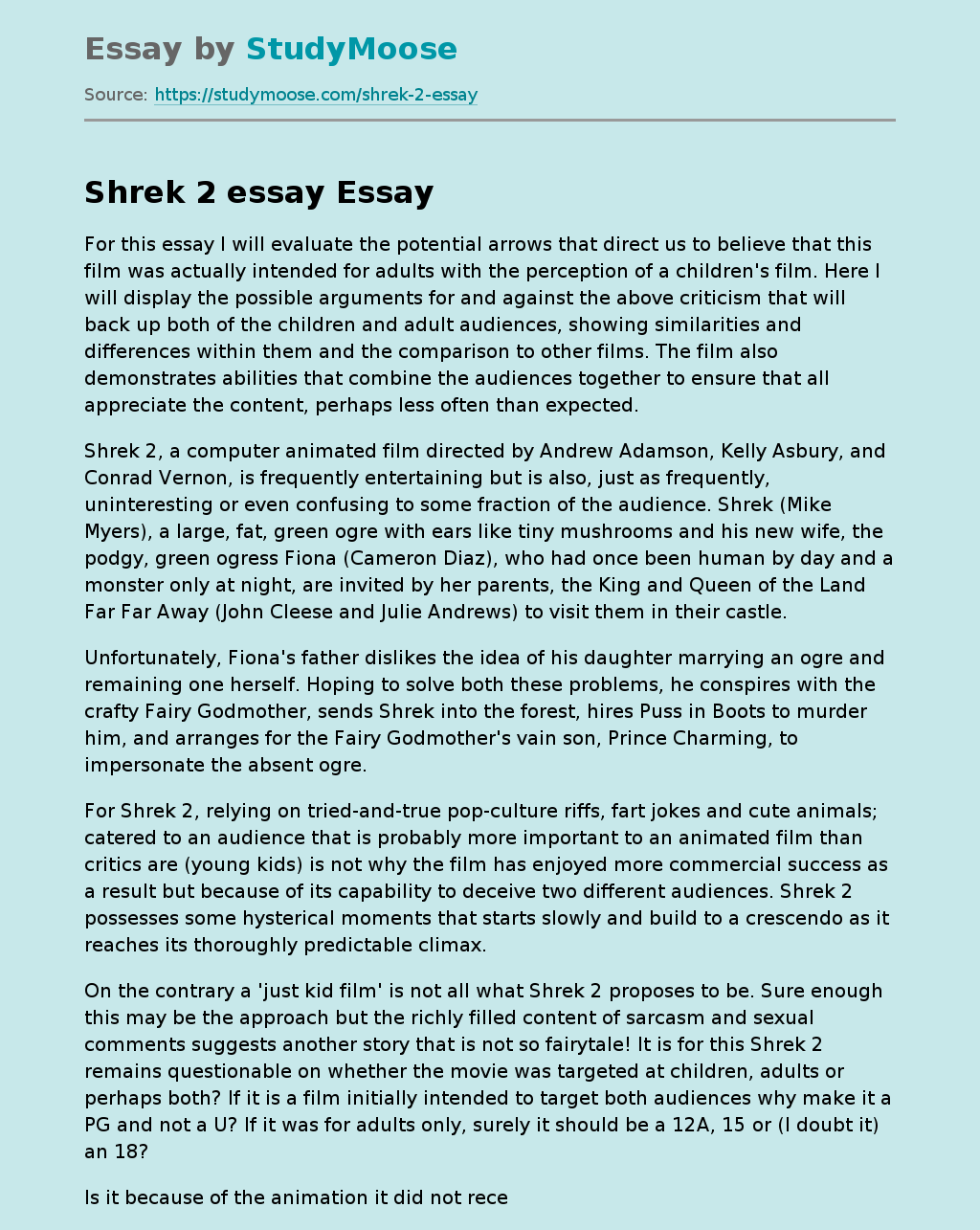