Show the importance, to the play, of the opening scene and the two scenes in which Macbeth meets the witches

The witches are a vital ingredient in Macbeth, as they encourage Macbeth’s tragic downfall. The extent to which they are responsible for his eventual downfall is an issue that I will explore at length in this essay. The play creates the inevitable question ‘are they real’? They play an important role bringing an unsettling atmosphere, which creates a frightened response from the audience. The play arouses thoughts of good and evil, and also has many references that stay faithful to the Elizabethan beliefs.

Don't use plagiarized sources. Get your custom essay on
“ Show the importance, to the play, of the opening scene and the two scenes in which Macbeth meets the witches ”
Get custom paper
NEW! smart matching with writer

In this essay I wish to explore the true roles of the weird sisters.

From the beginning of the play the witches display their knowledge of Macbeth’s weakness. “There to meet with Macbeth,” this excerpt is taken from act 1 scene 1. Commencing from this we are aware from the beginning that the witches know Macbeth, even if he does not know them. Throughout the play they abuse their supernatural knowledge of Macbeth. “By the pricking of my thumbs, something wicked this way comes; open locks, whoever knocks.

” They strive to crack him so he will give into his ambition. Some people believe that the witches are fully responsible for the murder and if the witches had not have enticed Macbeth then he would not have murdered Duncan. I, however, do not agree with this theory. The witches merely warped Macbeth’s mind pushing him in the wrong direction. Macbeth has a tragic flaw. The word tragic is when; in a play the hero is destroyed by a personal failing in adverse circumstances.

Macbeth failed to resist the temptation of giving into his ambition, of being king, even if it meant killing his cousin.

Throughout the play we are constantly reminded of the opposing forces. Good and evil, trust and lies, honesty and dishonesty and natural against unnatural. Shakespeare’s underlying concern is introduced in the fourth line of the play, “When the battles lost and won”. It is impossible for the same battle to be both lost and won, it is a contradictory verse. But the witches were not talking about just one battle, they meant that Macbeth would win the first battle but lose gravely in the long run. He will lose his soul. Another contradictory verse is at the end of the scene, “Foul is fair, and fair is foul”. Good becomes evil. Another important theme in the play is between the appearance and reality. Throughout the play, nothing is apparent with Macbeth, nothing is what it seems. Everything is indecisive and ambiguous. This logicality underpins the whole play. An example of when Macbeth sees something, which is not really there, is in act 2 scene 1. “Is this a dagger I see before me, the handle toward my hand?” There is also a reversal in the natural order, the ‘pets’ summon the witches and in Shakespeare’s time they were thought to be possessed by evil spirits, this is a reverse in the natural order.

The witches appear first in the first scene of the play. This is a short scene; therefore it has to be spectacular in a dramatic and arresting way. This scene must illustrate a manifestation of evil for that way how the Elizabethan’s viewed witches at that time. An astonishing sense of evil must cover the audience in this scene where the weird sisters are introduced. The thunder and lightening will create an experience of unnatural behaviour. As the witches scream their wicked incantations the flashes of light will be thrown about the stage with the misty affect of the desolate place. I would want it to appear like this because Shakespeare intended for this scene to be in a desolate place. I would keep it authentic and set it in 1606. I would set it then because it seems that Macbeth was first performed in 1606 to King James in Hampton Court. In my production there would be few props, I feel anything that distracts the audiences attention from the actors should be avoided. I would have only a few random rocks and dead animal corpses to bring out the disturbance in the natural order. Each line will be recited clearly, and each line will run in to the next, so to create a long flow of evil rhymes.

Witches were taken very seriously in Shakespeare’s time. They were recognized by everybody of every different division, from the privileged to the pitiable. Reginald Scot wrote a rationalism book about witches in Shakespeare’s time, James I was so shocked and disgraced by this frank book that challenged his own beliefs that he ordered the book to be burned. In this play Shakespeare aimed to please king James, which is another reason for the witches. Shakespeare was very careful with his ‘weird sisters’, so not to fail the Elizabethan beliefs. He placed them in a thunderstorm as if they controlled the weather, which they were thought to have been able to do.

There are a few references to an owl, “I heard the owl scream,” and owls were thought to have been ‘familiars’ to the witches also thought to be their aid in unnatural activity. In act 2 scene 1, Macbeth has an illusion of a floating dagger before him, almost like a nightmare. Nightmares were thought to have been caused by witches riding on horseback through the night and visiting people’s dreams causing havoc in the head. The word ‘weird’ is taken from the old English word for ‘fate’. The witches are associated with Hecate, who is the Greek Goddess of sorcery and the other world. Shakespeare wrote his play with authenticity and did it so well as not to anger James I.

Though we have established that the witches were not totally responsible for Duncan’s murder, we know the weird sisters tempted Macbeth. In act 1 scene 3, the witches first meet Macbeth, “All hail Macbeth, hail to thee, Thane of Glamis…Thane of Cawdor.” At this point in the play Macbeth does not know whether he was Thane of Cawdor or king, so they both take these greetings as prophecies. “All hail Macbeth, that shalt be king hereafter.” The witches have basically told Macbeth that he is going to be king, just not how, Macbeth chooses his own path to the throne. During this scene the witches all drop at Macbeth’s feet and hail him, like a king, this plants the idea of becoming king in Macbeth’s head.

They also convince Macbeth that he is all-powerful and immortal through their cunning equivocations. He thinks that he is everlasting because the second apparition predicts to him “The power of man, for none of woman born shall harm Macbeth.” From this Macbeth believes that he will never be slain by a man, but Macduff was born through a suzerain section and because they were uncommon Macbeth thought not of this, Macduff was not born of woman. After this prediction Macbeth begins to act differently and we witness a transformation from “Brave Macbeth” to a “Hell-hound”. All because of his inability to resist temptation.

Through the power of Shakespeare’s poetry the witches use many noteworthy words. From the beginning, the witches use words with double and hidden meanings. “When the hurly-burly’s done.” The words “hurly burly” foresees the frightful actions to come. The word means uncertain, bewilderment and confusion, not unlike the chaos in Macbeth’s mind later in the play. In act 1 scene 3 the witches sit and scorn about a sailor’s wife, “Sleep shall neither night nor day.” This is a prediction of what will happen soon to Lady Macbeth, she will be deep in turmoil. “So foul and fair a day I have not seen.” This quote is contradictory and also has a double meaning.

The witches are please to see Macbeth and start their evil indications, but for Macbeth the day will not be fine because due to the witches he will meet his doom. So for the witches the day is fair but in the long run it will be foul for Macbeth. As the witches hail Macbeth in act 1 scene 3 Banquo begins to enquire about why they speak not of him, they vaguely answer him. “Lesser than Macbeth, and greater.” This is like a riddle, he will be lesser than King himself but his children will be kings. Shakespeare creates the rhymes, which sound so frightful; they are a vital vehicle to show us the true effect of his poetic licence.

Show the importance, to the play, of the opening scene and the two scenes in which Macbeth meets the witches. (2020, Jun 02). Retrieved from http://studymoose.com/show-importance-play-opening-scene-two-scenes-macbeth-meets-witches-new-essay 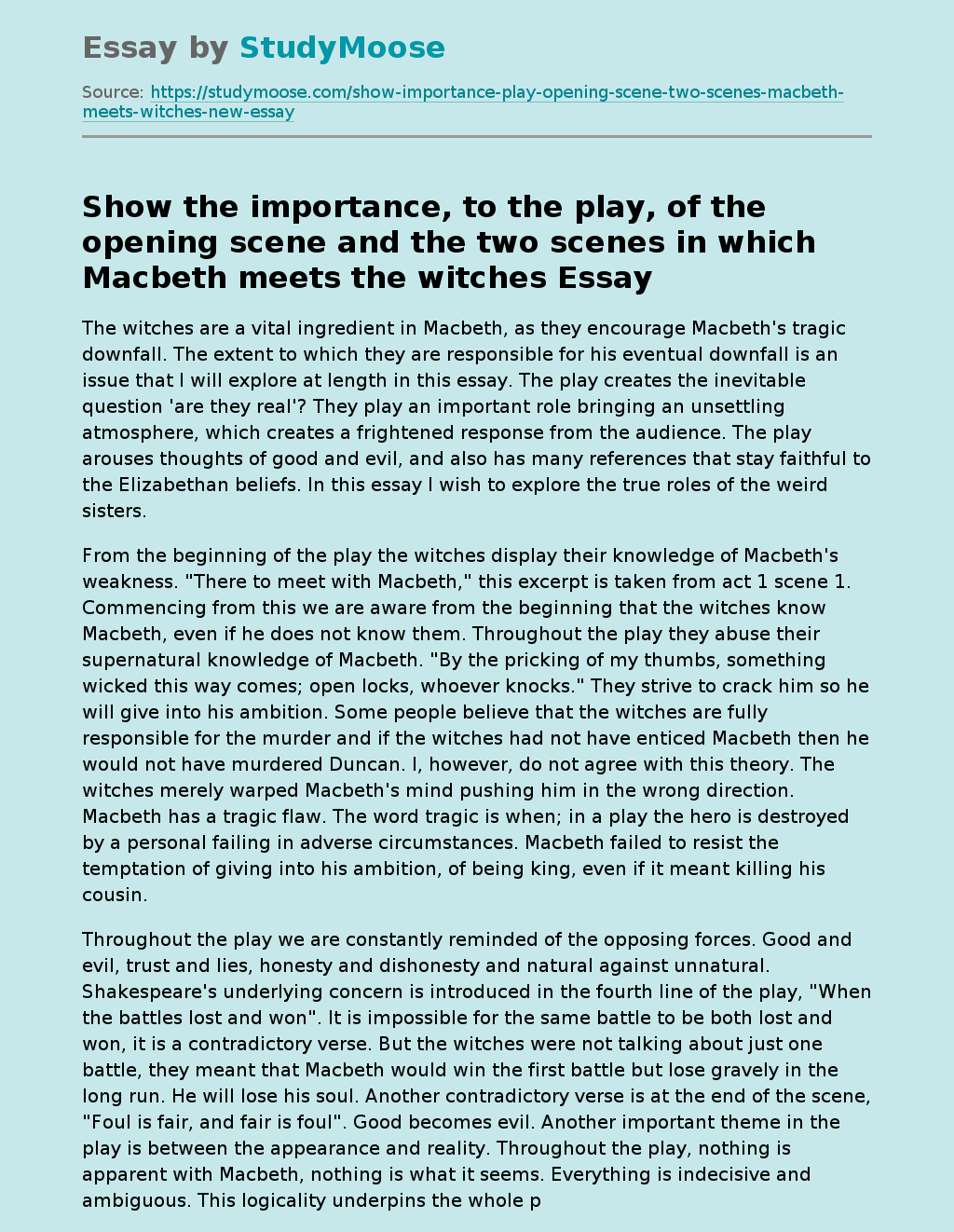