Should Voluntary Euthanasia be Legalized in Australia?

The term Euthanasia refers to ‘the painless killing of a patient suffering from an incurable and painful disease or if the patient is in an irreversible coma.

Don't use plagiarized sources. Get your custom essay on
“ Should Voluntary Euthanasia be Legalized in Australia? ”
Get custom paper
NEW! smart matching with writer

’ 1 The word euthanasia comes from geek meaning ‘good death’. Voluntary euthanasia gives the suffering person the right to request to end their life and to die with dignity. The word Voluntary defines as someone proceeding with a certain act intentionally.

The effects of voluntary Euthanasia:

Voluntary Euthanasia provides a way to relieve extreme pain, Frees up medical funds to help other people and it is another case of freedom of choice3. These are just some examples that support the fact of legalising voluntary euthanasia. Voluntary Euthanasia not only effects the patient suffering pain, however it also effects the general public.

The current law in Australia:

At the moment there are already political parties in Australia who support the legalisation of euthanasia, some of these parties include: Australian Greens, the Secular Party of Australia, Australian Democrats and the Liberal Democratic party5. A survey was conducted by (T Khalid, 2015), where 30 year 12 students were asked ‘should euthanasia be legalised in Australia?’ suggested that 77% of them agreed to this statement and the remaining 23% disagreed. The following graph represents the results:

Nitschke an Australian humanist believes ‘it is a fundamental human right for every adult of sound mind, to be able to plan for the end of their life in a way that is reliable, peaceful & at a time of their choosing.’6

People suffering from disease face many difficulties in life. Society fails to understand the pain that the a person goes through, which causes the patient to suffer to death. It is important for people to understand the use of voluntary euthanasia, and to encourage the government to legalise it.

Should Voluntary Euthanasia be Legalized in Australia?. (2016, Sep 25). Retrieved from https://studymoose.com/should-voluntary-euthanasia-be-legalized-in-australia-essay 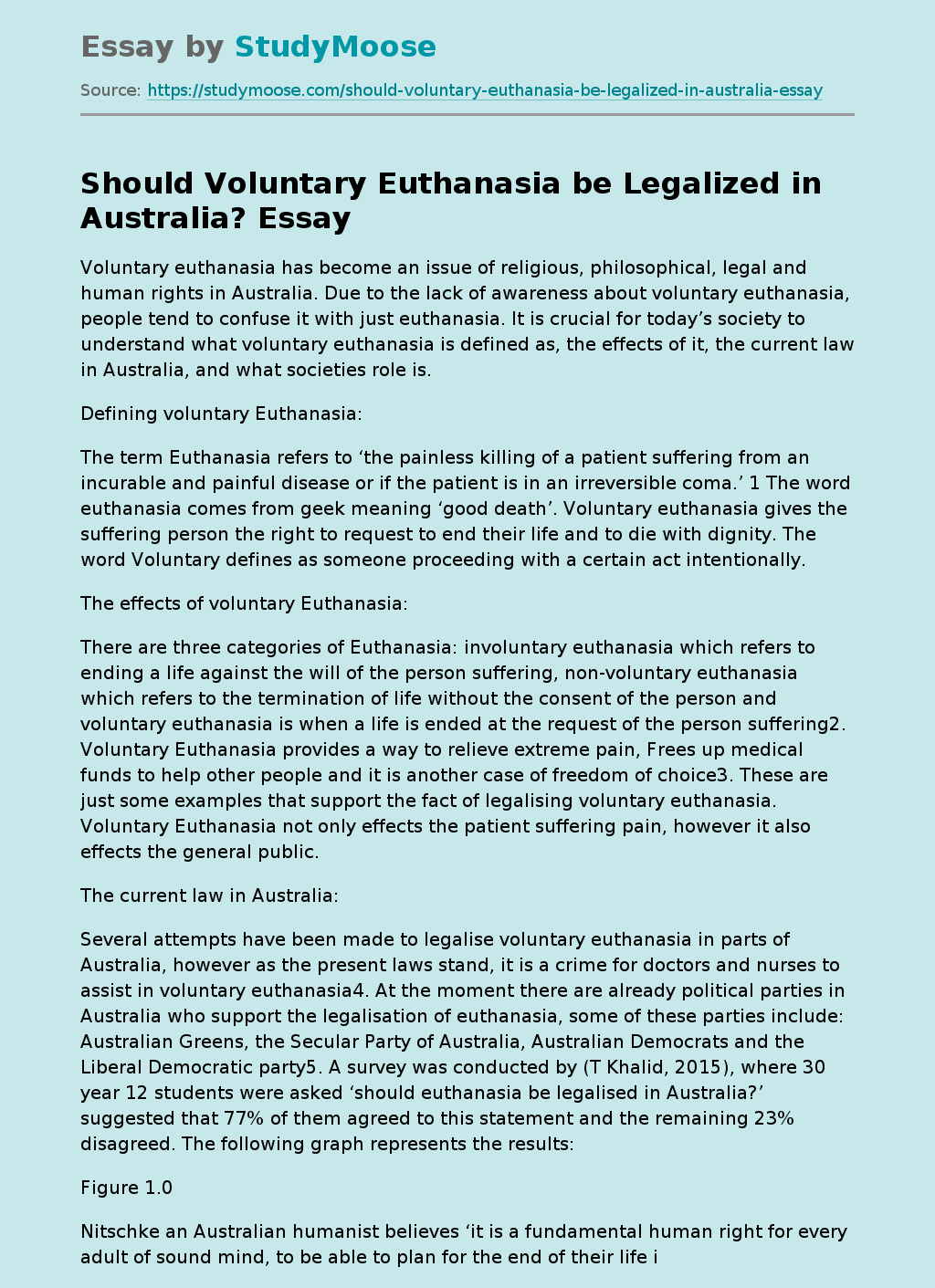