Should Underage Drinking be 21 in All States?

The Drinking age ProCon.org from the source ProCon.org is a positive and negative effect on the drinking age that disputes to reduce the age for consumption of alcohol to be escalated to youth people to consume a big amount of alcohol in a short period of time that jeopardizes youth people department. However, reducing the MLDA claims that the age of teens is not reliable when it comes to responsibility when they have control over the consumption of alcohol.

Don't use plagiarized sources. Get your custom essay on
“ Should Underage Drinking be 21 in All States? ”
Get custom paper
NEW! smart matching with writer

The Vietnam War led the 21st Amendment to revoke the banning of alcohol that states to authorize their own age of alcohol consumption and the age to vote since the age gap of the consumption of alcohol and voting breached the Equal Protection Clause that was reduced from 21 years old. They are some states that deviations that allow youth people to be able to drink that in the 14th Amendment.

The Mother Against Drunk Driving(MADD) is a national nonprofit that supports the people who were affected by underage drinking and to end the drinking and drugged driving.

The founder of the MADD daughter was killed by an underage drinker when she was 13 years old however the Supreme Court prosecute the underage drinking and that when MADD was created. Since most states lowered their drinking age it came to an extreme problem for traffic security problems this caused to some states to raise their drinking age back to 21 but others didn’t contribute. “Congress enacted the Uniform Drinking Age Act in 1984, which provided that states that failed to raise their MLDA to 21 would lose a portion of their federal-aid highway construction funding. In response, all remaining states increased their MLDA to 21 by 1988.” (IV 1). The law that caused a decrease in accidents that occur in traffic but some states have the “legal” age lower than 21 years old. Making the drinking age less than 21 would increase the number of the age group to attend a location where they can drink and supervision decrease the number of a car accident and risky situations.

When banning people under 21 to enter locations that have supervision causes them to make decisions to attend parties where there are no supervisions. ”In the United States, 31% of road traffic deaths involve alcohol. [48] This percentage is higher than in many countries with a drinking age lower than 21 such as France (29%)” ( Drinking 1). Since the law for drinking does not lower the number of teens drinking and often receive alcohol by their family members, stranger or older friends to buy alcohol for them. This causes them to consume alcohol even though it’s illegal for them and tends to drink since it makes them look “cool” and experience thrill and appease but lowering the age to 18 would make drinking no longer fun and thrill since there are not breaking rules.

The role of the Endocrine system helps control growth when puberty that consists of metabolism, mood swings, and tissue function. When consuming alcohol at an early age has caused several physical problems to the endocrine system such as development to the brain, hypoglycemia, osteoporosis, and other system damage. It can affect the frontal lobe in the brain that controls skills in the human basically the “control panel” of our personality and ability to communicate. The frontal lobes control our emotional experience, problem-solving, loss of memory and sexual behavior. It has a major impact on the behavior that includes youth people to have aggressive that causes them to get in fights and illegal acts. Children of alcoholics never had a “normal” childhood since they were raised with depression anxiety and negligent and they are at risk of developing their parents’ addiction later in life.“Children of alcoholics (COAs) are between 4 and 10 times more likely to become alcoholics themselves than are children who have no close relatives with alcoholism (26)” (Underage 1).

A survey from MTF of each high grades school that has consumed alcohol also showed that 12th grader heavenly tends to drink more than the 5 bottles of alcohol in a short time as shown in figure 6 (Underage 1). Binge drinking is when they consume a heavy amount of alcohol in a short period of time. Being at the level of 0.08 or higher when drinking can pose serious health risks one of them is a sexual assault that is one of the problems university and college accounter. Sexual intercourse under the influence has major health risks from not using protective and might trader diseases such as HIV or chlamydia. “They sexually assault their female companions (approximately 100,000 incidents annually) ….. Eight percent of students — 474,000 — have unprotected consensual sex each year because they have been drinking.” (Underage 1).

I already discussed some arguments for lowering the drinking age and to keeping it stable at a much older age than 18 in all states. That having the legal age at 21 would benefit for the many situations that have happened when states lower the MLDA to 18 that increased the traffic accidents.” In the 30 years since MLDA 21 was introduced, drunk driving fatalities decreased by a third. [50] The National Highway Traffic Safety Administration (NHTSA) estimates that MLDA 21 has saved 31,417 lives from 1975-2016.” ( Drinking 1).

In conclusion, I think that the minimum legal drinking age understood the positive and negative effects on the drinking age to be lower than 21. The understanding for lowering the drinking age to decrease in risky situations, MDLA abortive and reducing the thrill from breaking the law. However not reducing the legal age is irresistible because the effects it has when drinking at an early age damages the development of the brain since it fully develops till the age of 25 and the behavior it causes when consuming at an early age from growing up in an alcoholism environment. You can also see how binge drinking may cause a situation for sexual activity and health risks when being under the influence.

Should Underage Drinking be 21 in All States?. (2020, Sep 12). Retrieved from https://studymoose.com/should-underage-drinking-be-21-in-all-states-essay 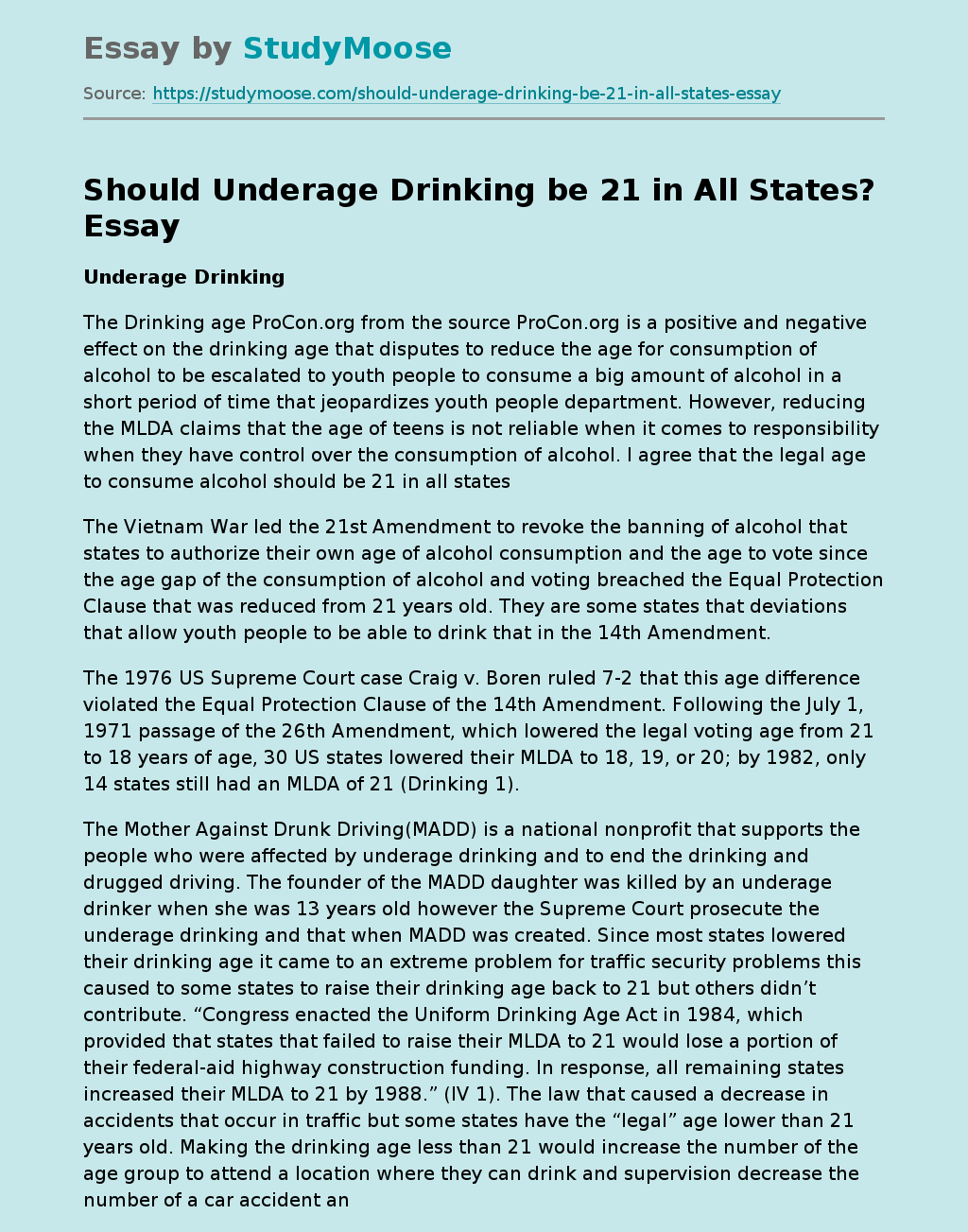