Should the Uk's Constitution Remain Uncodified?

The UK constitution has an uncodified constitution, which means that it cannot be found in any single document unlike the USA’s constitution. Our constitution comes from a number of various sources. Some are written and the others have just been accepted by the Government, such as EU Law, as it derives from the European Union. More examples of sources include the statute law, books written by Bagehot’s “The British Constitution”, which outlined the role of the cabinet, parliament and monarch.

Don't use plagiarized sources.
Get Your Custom Essay on Should the Uk’s Constitution Remain Uncodified? Just from $13,9/Page

The constitution we have gives way for many benefits and advantages that imply that it shouldn’t be altered or fully codified as this could result in major problems. Although there would be some benefits of the constitution remaining uncodified, some government ministers such as Gordon Brown who was Chancellor of the Exchequer and Prime Minister had called for the topic to be debated in Parliament back in 2006.

The Liberal Democrats have also expressed their views on the topic also.

Having a codified constitution would cut down the size of the current government dramatically. It would also end the principle of parliamentary sovereignty and subsequently elective dictatorship. Elective dictatorship is a constitutional imbalance in which executive power is checked only by the need of the governments to win elections. In the UK, it is reflected in the ability of government to act in any way they wish as long as it maintains the control of the House of Commons. It would also mean that the government could not interfere with the law, as there would be a higher law safeguarding the constitution. A codified constitution would also be policed by senior judges who ensure that the provisions of the constitution are being properly upheld by other public bodies.

Many people believe an uncodified constitutional nature of UK politics has ensured we have a long history of democracy. They also argue that a codified constitution may not be the most effective way of limiting the government, an alternative could be creating checks in the current political system should be taken, instead of introducing a whole new constitution. In conclusion, I think that a codified constitution should be introduced in the British government, as it would easily state the rights of the citizen when needed to defend themselves in court; it would be accessible to the public at any time the rules would be clearly laid out. It would also mean that the government would not be able to amend the laws to benefit them, as they would be safeguarded by a higher law.

Should the Uk’s Constitution Remain Uncodified?. (2016, Dec 12). Retrieved from https://studymoose.com/should-the-uks-constitution-remain-uncodified-essay 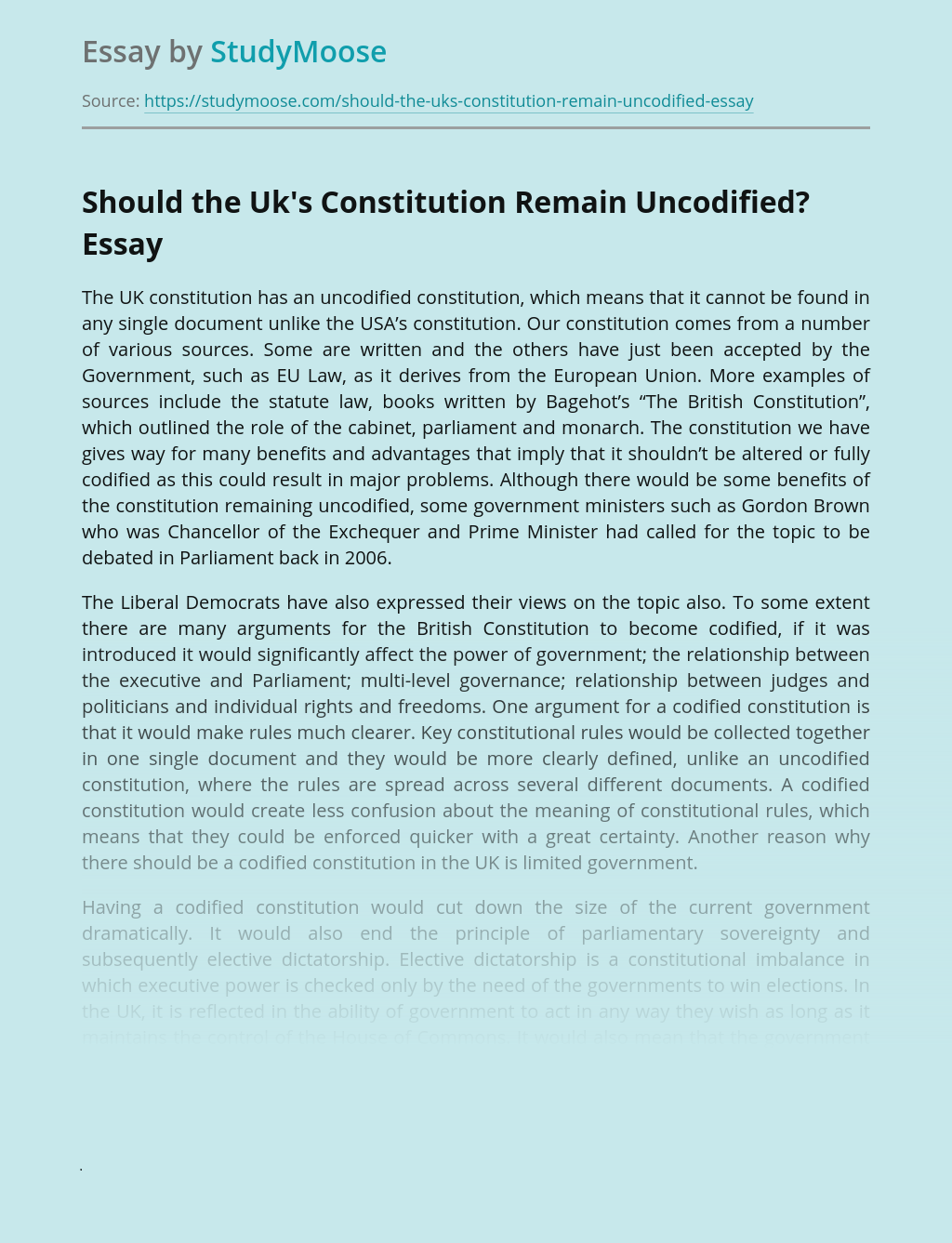 The Analysis of Obama's Victory Speech

INTRODUCTION Senator Barack Obama’s victory in the U.S. presidential election was celebrated in his hometown of Chicago by hundreds-of-thousands of supporters who reveled in the history-making moment. In a large, open-air park, Obama thanked his supporters, and outlined the challenge he hopes to make as president. He is the first African-American elected president of the...

Get Essay
﻿Essay on the Freedom of the Press

The Press, as identified with Newspapers, wields immense power in a democratic society. Dickens has called the Press “the mighty engine”. So great is its influence that some have called it the Fourth Estate. Napoleon used to say— “Your hostile newspapers are more to be feared than a thousand bayonets.” For, the press forms opinions,...

In the 1820’s and 1830’s, the Jacksonian Democrats, with Andrew Jackson as their leader, viewed themselves as the guardians of the Constitution, political democracy, individual liberty, and equality of economic opportunity. However, this view did not truly represent the actions taken by President Andrew Jackson and his followers, it was only a façade put up...

How Today's Managers Use Scientific Management

An overview During the past 57 years, Pakistan’s experiences with democracy have been transitory, as brief democratic rules have been followed by prolonged military regimes.As a nation, Pakistanis have time and again refused to delearn the incremental lessons in parliamentary democracy. Due to this fact, the four military regimes that Pakistanis saw finally reverted to...