Should the Legal Drinking Age Be Lowered

Can you honestly say that you never had an alcoholic drink when you were under the legal drinking age? In the United States, the minimum legal drinking age (MLDA) is considered to be 21 which included the purchasing and consuming of any alcoholic beverages. The minimum age for purchasing alcohol has changed many times over the years and at one-point states were able to set their own age for purchasing. The MLDA was signed on July 17, 1984, by President Ronald Reagan and passed by Congress.

Don't use plagiarized sources. Get your custom essay on
“ Should the Legal Drinking Age Be Lowered ”
Get custom paper
NEW! smart matching with writer

Therefore, the legal age should change again, this a new time and we have more information on the matter. When the Socratic method is applied to the age of consent for alcohol we quickly see that age restriction goes against fundamental rights, in that it is contradictory to other adulthood rights of passage, less potential for abuse when the thrill for illegally accessing alcohol is gone, having less government makes for a better society.

According to US Legal, an adult is someone who has met the age of majority, which basically means you get all full legal rights and responsibilities of adulthood at 18.

It is also the age at which a person is liable for their own actions, such as contractual obligations or liability for negligence. We reach an age where privileges we are born with are able to be exercised, which includes the right to vote, consent to marriage, serve on a jury, buy tobacco, serve our country, and make a will. At 18 years of age, we are able to make life-altering decisions not only for ourselves but for others and our country, but we are not given the right to consume.

By setting the legal drinking age at 21, 18-year-olds, who are supposed to be adults, aren’t truly adults because they still have restrictions. The age differential creates several issues, for example, having to ask a friend or even a stranger to buy alcohol for you, not calling 911 for fear of legal consequences if an accident were to happen and, instead of being monitored by a parent at 18, binge drinking often occurs while in college.

Underaged drinking has and always will be a problem for America. As a teenager/young adult, there is a certain thrill of being rebellious and doing something illegal. In fact, some may think they are cool for doing this, or that it is also a right of passage during college years. Many people may be scared of lowering the drinking age because they don’t want to make it easier to access something to something that can cause so many problems and is addictive, although if you think about other things like tattoos, piercings, or even smoking/chewing tobacco these are all things that are just as addictive and can also cause problems. They may not be seen in the same way alcohol is but it starts the same way, a friend or a classmate encourages you to do it or get one. It may be hard to believe but by being legal to drink while at 18 it will actually lessen the chance of reckless drinking, parents will be able to manage how much their children drink and it will be slowly introduced, kids won’t feel like they have to go behind their parents back, and risking jail time for illegally gaining and consuming alcohol.

There is a saying by Pliny the Elder, “In wine there is truth” and with teens, they take it as a more commonly phrased saying as, drunk words are sober thoughts. On another more philosophical level, it can be broken down to mean consuming alcohol allows the mind to operate with fewer restrictions and controls. In this day and age, there are many things that limit our minds and controls how we view things, for example, society, culture, politics.

Should the Legal Drinking Age Be Lowered. (2021, Apr 03). Retrieved from https://studymoose.com/should-the-legal-drinking-age-be-lowered-essay 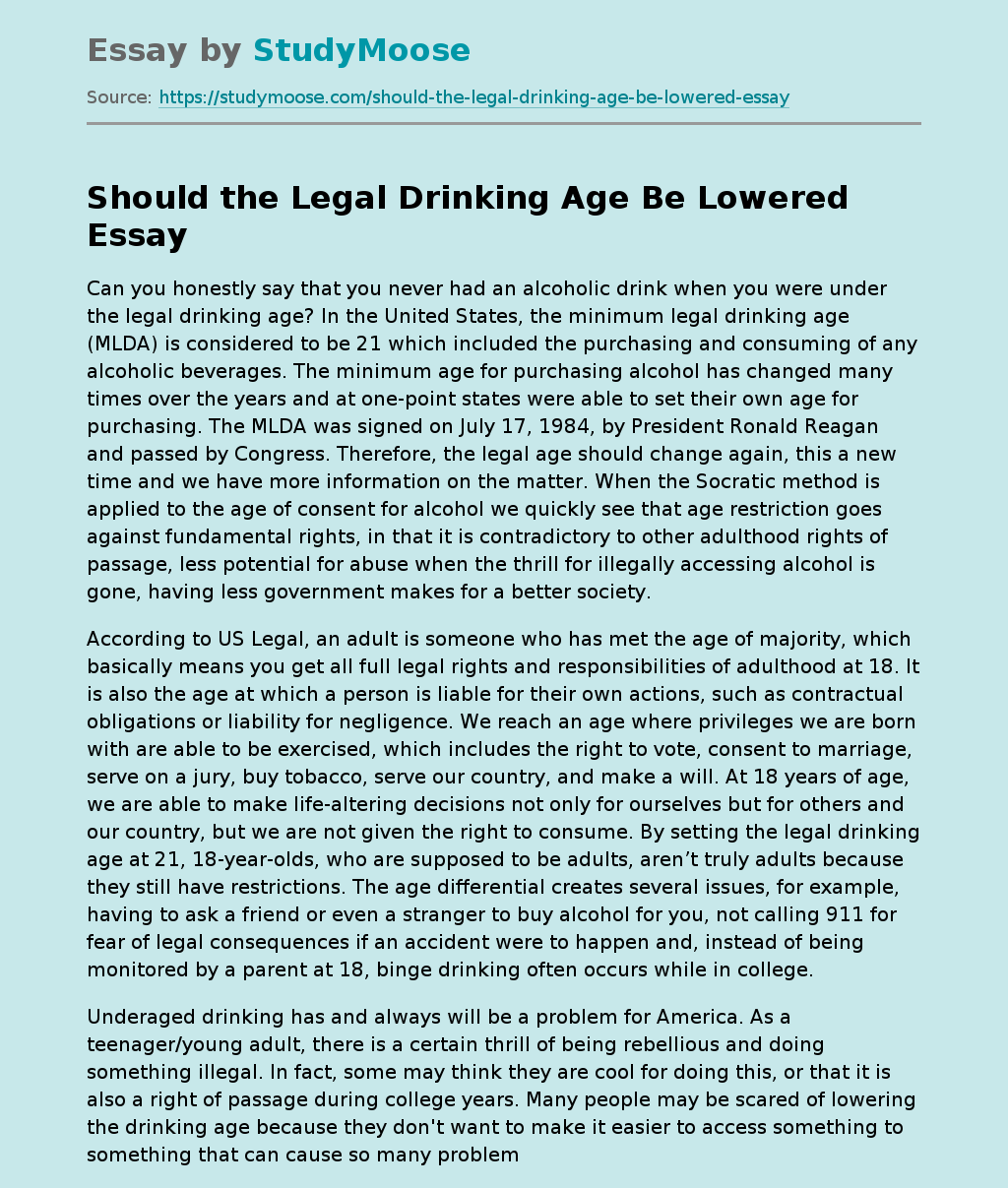