Should the Endangered Species Act Be Strengthened

Most of us do not realize how much we take for granted, but there are some out there who feel as I do when it comes to strengthening the Endangered Species Act. This law is essential to present and future generations, although we may not realize it. Humankind is lucky to live in such a variety of ecosystems, but unfortunately, we all happen to leave some type of mark on the Earth and share in the destruction of many species, as well as their habitats.

Don't use plagiarized sources. Get your custom essay on
“ Should the Endangered Species Act Be Strengthened ”
Get custom paper
NEW! smart matching with writer

Timber companies cut down thousands of acres of natural forests for the wood and to make room for more many different uses of the land, such as agriculture or city expansion.

Because of this many species have become endangered, or close to extinction from our hands. It is up to us to do what we can to stop the damage and to reverse what impacts we can. The purpose of this comparison essay is to establish points on both sides of this controversial issue, along with the support of professional opinions on of this issue from each viewpoint.

Some 1,950 species who are on the Endangered Species List have received protection from the ESA. Of those, 1,375 reside partly or fully within the United States. Because of this law, many species’ habitats were saved by destruction and degradation from human activities, such as logging, real estate and other industry development, mining, and global warming.

“The Endangered Species Act is very important, because it save our native fish, plants, and wildlife from going extinct. Once a species are gone, there is no way to bring them back.

Losing even a single species can have disastrous impacts on the rest of the ecosystem, because the effects will be felt throughout the food chain” (National Wildlife Federation, 1996). The purposes of the Endangered Species Act are to “provide a means whereby the ecosystems upon which endangered species and threatened species depend may be conserved, to provide a program for the conservation of such endangered and threatened species, and to take such steps as may be appropriate to achieve the purposes of the international conservation treaties and conventions” (Czech & Krausman, 1997). The ESA has a history of strict interpretation by the courts, and two ESA issues have become increasingly controversial: 1) the types of species that are listed, and 2) the limitations that the ESA impose on development projects, especially in the private sector” (Czech & Krausman, 1997). “Bald eagles, gray whales, sea otters, and the gray wolves are among the thousands of species threatened by habitat loss” (Cunningham & Cunningham, 2009).

Between the National Oceanic and Atmospheric Administration Fisheries Service (NOAA), which observes marine life, and the U. S. Fish and Wildlife Service, which manages species on land and in freshwater, the rules and regulations of the Endangered Species Act are enforced. This can be a tough job watching over the various species and observing their habitats, while adding and removing new or recovered species to and from the Endangered Species List. In order for a species to be considered for listing, the species must meet one of the five criteria:

Likewise, delisting a species is a long and difficult process.

First the population numbers need to reach an acceptable rise and all factors that caused the dwindled numbers of a species must be eradicated. As John Kostyack, who represents the National Wildlife Foundation, points out that the ESA has been so successful that is should be strengthened, not weakened. This reminds of the saying, “If it’s not broke, don’t fix it. ” Kostyack also pointed out the following threats that create challenges in wildlife conservation: invasive species, sprawling development patterns, and global warming (Easton, 2009).

In order to deal with these threats environmentalists, animal lovers, and some government officials agree that the ESA should be strengthened. Like most environmentalists, wildlife enthusiasts, and scientists, I believe that the Endangered Species Act (ESA) should be strengthened. There are many reasons for this belief that is shared by most individuals like the importance of saving these species that are threatened or close to extinction. While not all of the species on the Endangered Species List are of direct use to human beings, they are still necessary to sustain one ecosystem or another.

For instance, when park officials at Yellowstone National Park noticed the repercussions caused by the decline in population of the gray wolf; as mentioned earlier. As humans, we do not need the gray wolf, but in order for the ecosystem at the park to sustain itself, the gray wolf is needed. When the gray wolf population dwindled, scientists noticed that the populations of deer and elk rose dramatically without the gray wolf to kill and eat them. Due to the abundance of deer and elk, many plants, such as the willow and aspen were being destroyed.

Another result is the smaller mammals grew in population, as well. So, whether a species is a direct use for human beings or not, every species is just as important as the next. Both sides of this controversial debate agree the preserving plants and animals for future generations that are essential to the continuity of the human race, as well as other species. The difference in opinions is based from property rights advocates who argue that the act should be weakened instead of strengthened.

Monita Fontaine, spoke on behalf of the National Endangered Species Act Reform Coalition (which is a group of that represents those who are affected by the ESA; also known as NESARC). “Drawing from our members’ experiences and observations, NESARC identified a series of guideposts from which to consider future improvements to the ESA, which include the following: encourage sound decision-making, promote innovation, promote certainty, increase funding, reduce economic impacts, increase roles for state and local governments, provide greater public participation, and limit litigation” (Easton, 2009).

As mentioned earlier, one of the biggest issues that those who believe that the ESA should NOT be strengthened is that it impedes the rights of property owners. Most of the endangered species’ habitats are located on private property. “These individuals believe that the Endangered Species Act is an attempt to take away private property, as well as affront to their individual liberties” (Cunningham & Cunningham, 2009). “Among the key steps that can be taken to make the ESA more effective would be to increase unding and technical assistance to private landowners who want to contribute to species recovery on their properties” (National Wildlife Federation, n. d. ). In this regard, there are already existing programs which conservation incentives can be provided by; the Farm Bill’s Conservation Reserve Program. Other options include; reducing capital gains and estate taxes, or allowing expenditures that are part of specified species conservation programs.

In conclusion, the Endangered Species Act is an essential part of environmental law, and therefore, should be strengthened and improved in areas that require improvement. These areas, such as funding; local, state, and public opinions, and recognizing individuals’ property rights can only strengthen the act in itself. Both sides of this controversial issue agree that there are ways that the act can be improved, but differ on those methods. One thing that is crystal-clear is that saving any and all species is important to sustain ecosystems and the human race.

If even one species is lost forever, the entire food chain will be affected. It is up to us who have brought extinction upon some species due to our continued actions, thus it is our problem and one that demands crucial attention. Human activities like real estate development, mining, and logging have destroyed and degraded thousands of acres of natural habitats of some species. By protecting the habitats of certain species we are able to save them, and ensure that they will live on without any negative repercussions.

Should the Endangered Species Act Be Strengthened. (2020, Jun 02). Retrieved from https://studymoose.com/should-the-endangered-species-act-be-strengthened-essay 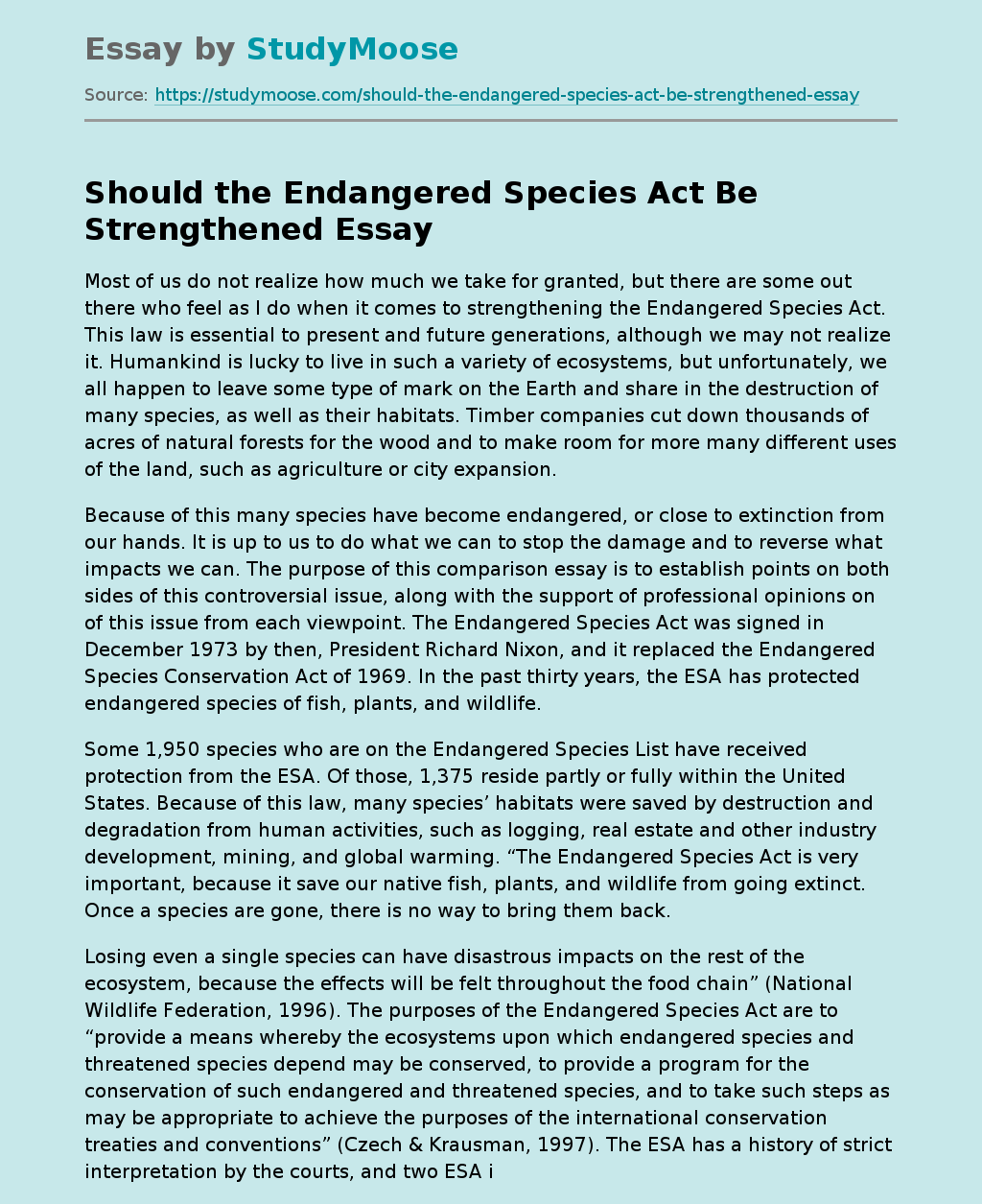