Should Teenagers Accused of Violent Crimes as Adults?

Should teenagers accused of violent crimes be tried and sentenced as adults? Why or Why not?

Adolescence and the death penalty, two words more commonly seen together as of late. With growing number of young adult being tried and sentenced as adults for violent crimes the question rises why did they commit does age matter to the jury when they are put on trial? According to Paul Thompson, author of the article, “Startling Finds on Teenage Brains”. In the article Thompson notes a massive loss of brain tissue during the teenage years.

Don't use plagiarized sources. Get your custom essay on
“ Should Teenagers Accused of Violent Crimes as Adults? ”
Get custom paper
NEW! smart matching with writer

While research on brain _ tissue loss can help us to understand teens better it cannot be used to excuse their violent or homicidal behavior.

Juvenile being tried as adults are not competent enough to stand trial,” quoted from Laurence Steinberg taken from the article, “Many Kids called Unfit for adult trial,” by Greg Krikorian According to a Sacramento to Bee article written in 2003 youth are “emotionally or intellectually unable to contribute to their own defense”

It may common knowledge that a toddler doesn’t understand complex situations like an adult would, but the truth is around half of the kids in the age range of 14 to 15 don’t either.

A study show that when compared with young adults children ages eleven to thirteen were more than three times are likely to be found “Seriously impaired” in understanding the judicial process and aiding their own defense. But so we as teenage s know right from wrong? As teen we are prone to do things that are frowned upon by adults.

We are in the stages of life when we are most susceptible to peer _ pressure. And when more adults were faced with this question of whether or not adolescents should be tried as adults they said they didn’t fell that they had the “POWER” or right to judge whether someone should die or not. Kent scheidegger legal director of the conservative criminal justice legal foundation said that vast majority of teenagers even young ones know enough to be tried in adult court “ The notion that teenagers are not capable of understanding what is going on I find not credible in the case of “mentally normal teenagers.”

3. What I learn on completing this assignment was that there a lot or evidence and study that people when through to see if teenage and be trial as adults and what the brains tissue in a teenage body. 4. The strengths of my argument were the evidence that I use in the article and quote on what other people say about the argument. 5. My weaknesses in my argument would be the end of the essay. 6. What I learn for this assignment that they a lot of teenage that do stupid things and the crimes that they do and why do they do. This whole assignment was should you trial teenage as adults.

Should Teenagers Accused of Violent Crimes as Adults?. (2016, Dec 14). Retrieved from https://studymoose.com/should-teenagers-accused-of-violent-crimes-as-adults-essay 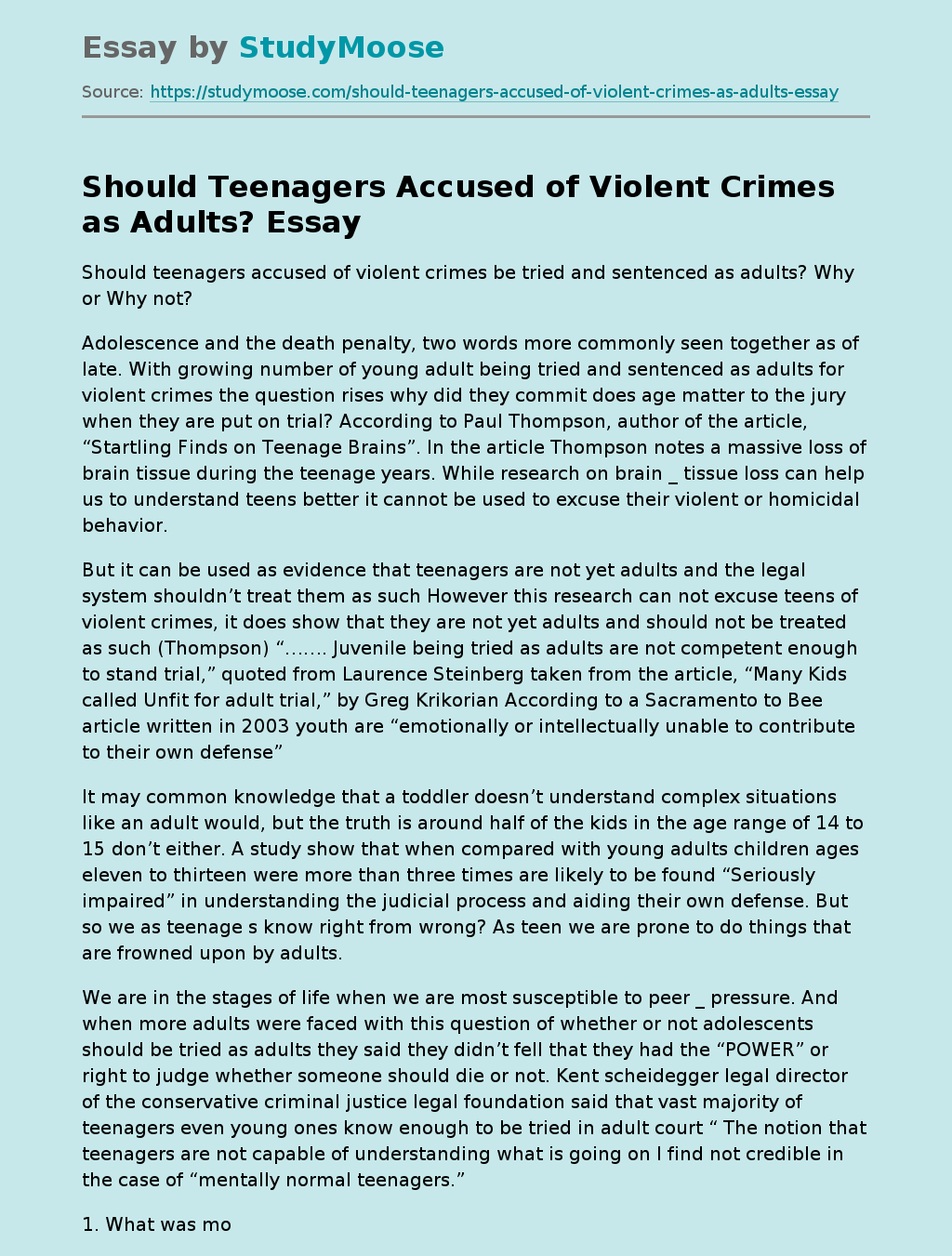