Should Schools have Metal Detectors

Have you ever felt violated, disrespected and dishonored to the point of no return? Many students around the world feel such a way every day. According to a 2002 National School Board Association report, 10.1 percent of school districts nationwide implement the use of metal detectors. Are metal detectors even effective? Why should students be forced to cooperate with a violation of their rights? High Schools around the world should not employ the use of metal detectors at all.

A metal detector cannot determine the will in the minds of students; therefore metal detectors would have no effect on a student’s judgment about bearing arms.

Don't use plagiarized sources.
Get Your Custom Essay on Should Schools have Metal Detectors Just from $13,9/Page

To illustrate, researchers asked “Of what value is a metal detector when an attacker is willing to kill others and take his or her life? Or threat-evaluation software, when most attackers do not make a threat before an attack?” In other words, this means that a metal detector cannot and will not alter an individual’s thoughts and timing of when an attack can happen.

This shows how metal detectors have a minute effect on the mentalities of certain students.

Opponents to my position would argue that high schools should have metal detectors because they effectively deter students from bearing arms in schools with violence and weapon problems. For instance, Modzeleski, Director of the Drug Free School program for the United States Department of Education admits “Some schools with a weapons problem can benefit from [metal detectors]”. According to them, this means that metal detectors can serve as effective restraints if schools have many students attending who may be carrying guns, knives and other deadly weapons. This shows that high schools with weapon problems should have metal detectors. This is because; in that situation the positives prevail over the negatives.

On the contrary, their position is incorrect because metal detectors aren’t completely 100% effective. According to the table “Comparison of Violence in Schools with and without Metal Detectors” it shows how over 7 percent of New York City students in 1992 would carry a weapon anywhere, to or from school, and inside school in any case. This means that a number of students will bear arms no matter what the condition implying that metal detectors would have no effect on them. This shows my opponents are incorrect because there is no sure positive way to prevent students from bearing arms, therefore making it inevitable.

In short, students shouldn’t be forced to cooperate with the violation of their rights. Even though metal detectors are somewhat effective and benefit schools by reducing the amount of potential danger, it is inevitable and all it takes is one mentally troubled person to physically affect us in a negative manner.

Should Schools have Metal Detectors. (2016, Oct 03). Retrieved from https://studymoose.com/should-schools-have-metal-detectors-essay 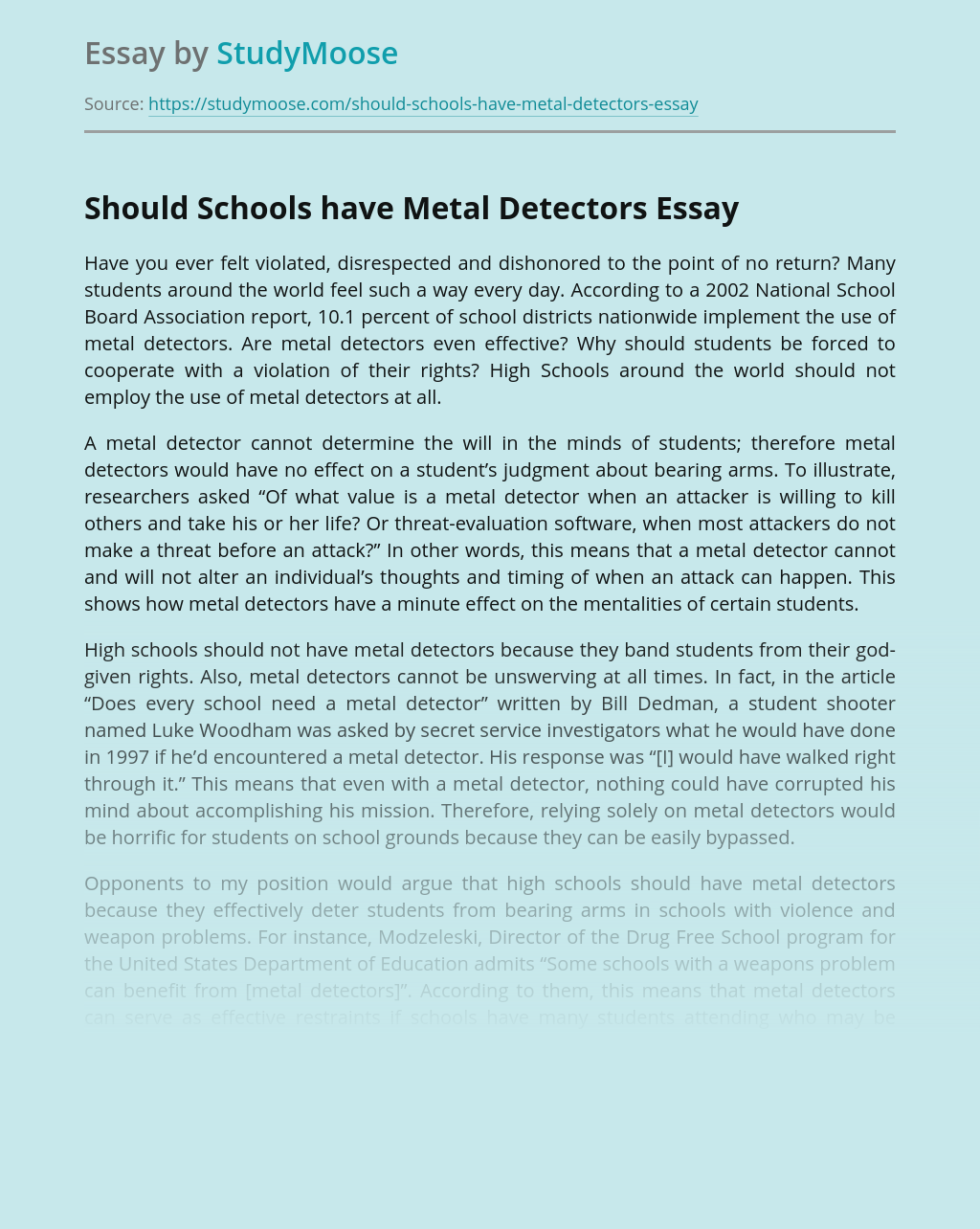 The word comes from the Latin word currere which means the course to be run. It contains the courses of study that a student has to complete successfully to obtain a degree certifying competence. (It is the What and Instruction is the How) In K-12 schools, it also contains the standards and benchmarks for each...

Important to define the terms prior to listing the entities which may impact on my work: Legislative requirement: A duty to act according to the law as defined in an Act of Parliament and usually enforceable through the courts. Code of Practice: A set of rules outlining how a person in a particular profession or...

Even thought the world is witnessing a sustainable improvement in all fields such as science and technology, it is still facing several problems that keep blocking it from improvement. One such problem is overpopulation that affects our life in many ways. Overpopulation generates three major effects: economy decline, environment downfall, and educational system decline. The...