Should Reality TV Be Banned?

The effects of reality tv

Reality television is not harmful to its viewers and can be beneficial. It is a good source of entertainment. Reality television has become a major part of what people are watching on television today. People are drawn to these shows to escape everyday stresses. It has become so popular because it plays off of people’s emotions and imagination.

Sitcoms usually portray perfect families who can solve any problem in thirty minutes. Reality shows show real people and how they react to different situations.

Don't use plagiarized sources. Get your custom essay on
“ Should Reality TV Be Banned? ”
Get custom paper
NEW! smart matching with writer

Many people are fascinated with watching how people react to different environments and different people. It is unpredictable and surprising. Every episode people are tuned in and curious as to what is going to happen next, which keeps them watching week after week. It leaves them imagining what is going to happen next, or what might have happened if someone had made a different decision. They wait in anticipation for the next week’s episode, wondering who will win the money and who will be chosen to go on to the next round.

Many reality shows also offer a large amount of money to the winner. It is interesting to see what people will actually do to win. On shows such as Fear Factor contestants eat pig intestines, free fall from twelve story buildings with only a quarter-inch cable to stop their bodies from hitting the concrete pavement below and do other dangerous and disgusting stunts. (Munroe B8) Viewers and contestants are both interested in easy money.

Another popular show, Temptation Island, sends unmarried couples to a tropical island to see if they will cheat on their partner with other sexy singles. People seem to be captivated by all the fighting, drama and random hook-ups. It is interesting to see who is still together and who broke up at the end of the show.

A study conducted at the University of Missouri-Columbia showed that reality television shows could have a positive impact of their viewers. According to recent Nielsen ratings, shows such as Survivor, Paradise Hotel, Temptation Island, Fear Factor, Big Brother and The Bachelor are attracting more than 18 million viewers per episode. According to Cynthia Frisby, assistant professor of advertising at the Missouri School of Journalism at the University of Missouri-Columbia “Entertainment needs are met through reality television because these shows allow people to make comparisons with media images – comparisons that ultimately help them feel better about themselves and their personal circumstances.” Television provides the thrill of observing danger and suspense without suffering any consequences. Reality television shows distract people from tragic and stressful events in everyday life for thirty minutes to an hour at a time.

People can also become more involved with the shows than just watching. With technology such as the internet and web cams, people can watch reality shows 24 hours a day. There are also chat rooms and message boards for people to talk about their favorite reality show at any time. This allows the viewer to follow and interact with the show for more than thirty minutes. The show came become part of their everyday lives.

The main goal of reality television shows is to draw audiences using drama, sex and being unpredictable. People continue watching because of their curiosity on what will happen next or what would have happened if someone made a different decision. Reality television can be a positive escape from reality and not harmful to its viewers.

Reality television is a programming genre that presents unscripted or “Humorous” situations, documents actually events and usually features ordinary people instead of real actors. Usually involves love, violence, and money. Examples of these types of shows are, “jersey Shore”, “Toddler’s & Tiara’s”, “bachelor” and “The Real World”. In my opinion I believe such reality shows that promote anorexia, partying, lust for money, violence, should be banned for Television. The reality shows that don’t promote that should stay on television, since they are not a harm to anyone.

I myself do not watch Reality Television, but do enjoy shows like the “Walking Dead”, therefore shows that are scripted. Shows that send an awful message like beauty contests should be banned because it creates an ideal of female beauty that a minority of females can create. It places pressure on women that have to catch up to these beautiful women on television. More the less, these contests encourage models and contestants to look even slimmer than they already are, promoting anorexia and bulimia.

Women are more judged by their physical appearance rather than any other qualities they may possess(ugly women simply aren’t going to win). Doesn’t matter how many Asian women win Miss World, they can only do so if they participate in the swimsuit competition, and that primarily is the whole point of beauty contests, which may be considered inappropriate in other cultures. There has been several protests and demonstrations as well as violence because of cultures having to go through the beauty competitions. An example would be of Miss World by feminist and Hindu nationalists when it was held in Bangalore in 1996. Riots rang out, putting more than 200 people dead and led to the competition being held in London.

Reality Shows that promote drugs and violence, and partying all night long, can impact a child or teens life if they watch that particular show. Shows such as “Jersey Shore” strongly disproves the existence of god, it should be banned and every recording of the show should be stomped on, burnt and the ashes should be put in acid. A experiment was conducted on television that people that watched that show actually got more stupid. We are role models to our younger siblings. If we teens watch the show and we have a little brother or sister, our younger siblings might want to watch it as well since we are watching them. They want to be just like us. An experiment by Francis Galton attempted a twin study where one twin in his teen years was watching reality shows that portrayed violence, and drugs and grew up doing those exact things, while his brother grew up a surgical doctor. These are the types of things we have to be cautious about. Snooki makes about $150 000 an episode. If we stop all reality shows right now we could therefore send all that money to help children in Africa.

So, to wrap this up I do believe reality shows should stay on Television, but the ones that send bad messages, like “Jersey Shore”, “Toddler’s and Tiara’s”, “Beauty Contests”, “Bachelor” and “The Real World” should be banned from television. Children don’t need this and I’m pretty sure people don’t need this. The fact that it is a reality tv show, the people involved in them do not hesitate to do what they want to. Somehow, some their actions go beyond their limits. More often than not, producers make the actors do whatever satisfies the society. This is not a great idea for producers running around shows that may endanger them, the people in the show and also their impact to the society. Instead of fighting and being rude to each other, it would be nice if the characters in these shows could, for example, reflect how ten ordinary people come into a house and work together to make the quality of life better for everyone. They could show the reality of working together to pay the bills and keep food on the table. They could teach how to step in when something bad happens to someone else and help them get back on their feet in one way or another.

Should Reality TV Be Banned?. (2017, Jan 09). Retrieved from https://studymoose.com/should-reality-tv-be-banned-essay 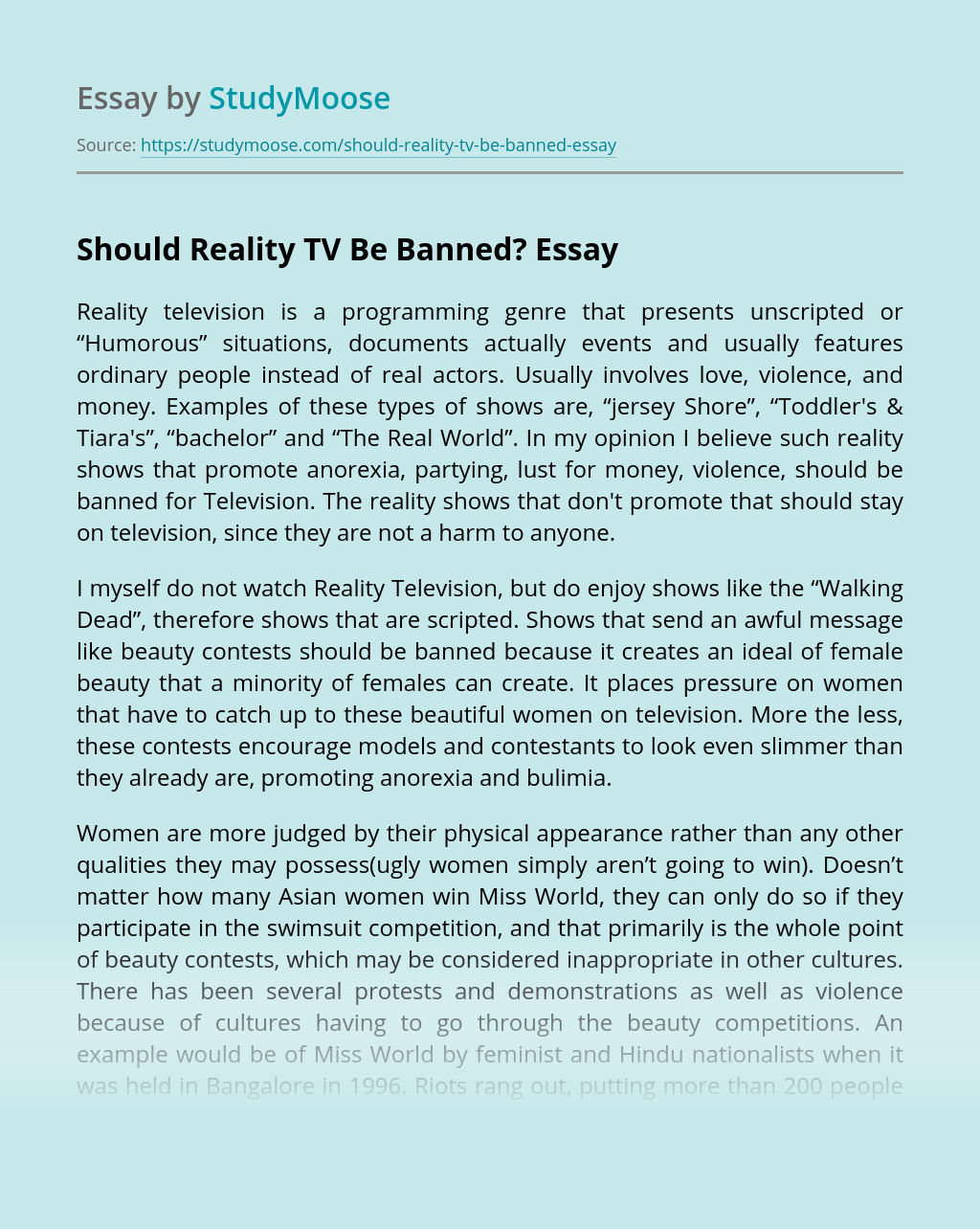