Should Nobody State University Raise

Assess a raise in tuition and if it will necessarily result in more revenue:
There are many issues why assessing the raise in tuition and that is first and foremost the college is spending more money each year. In many instances they have to pay more out to the faculty and staff, building new state of the art facilities whether it is class rooms or sporting arenas, performing more research and these cause spending to rise. Then we see that the colleges and universities have seen a decrease in funding from the state and federal levels due to the economy and in turn colleges are making up for the loss of funding by increasing tuition.

Don't use plagiarized sources. Get your custom essay on
“ Should Nobody State University Raise ”
Get custom paper
NEW! smart matching with writer

The issue here is that the schools are taking out the loss of funding from the state and federal level on the student’s tuition increases. Describe the conditions under which revenue will (a) rise, (b) fall, or (c) remain the same:

We all know that our economy has taken a big hit the past few years and times are getting harder for everyone.

Being a college student and having two young adults in college as well I have truly seen how the economy has affected our financial aid over the past eleven years or so. Tuition has become a big issue for community colleges, universities and private colleges all over the country. Revenues all over seem to be taking a hit and we see this in our increases in federal and state taxes it seems every year.

With the economic situation as it is it is inevitable that the college tuition will go up just like most everything else has. “When states run short of money, higher education is often targeted because it “has a built-in user fee, and that is tuition.” (Frahm, R. A., & Courant, S. W. 2002)

Explain the process of revenue at NSU, focusing on the relationship between the increased revenue from students enrolling at NSU despite the higher tuition and the lost revenue from possible lower enrollment:

Tuition revenues have increased for the most part because of the increased enrollment due to higher education being needed in the economic situation we find ourselves in today. Universities are finding that as long as their numbers are high their revenue will remain steady, but with the economy in the shape it has been for the past few years many are finding their enrollment lowering. When this occurs they have to find means of balancing the budget in order to not close the doors. I believe the issue between being able to have adequate revenue stems from those having fear of the skyrocketing tuition costs and having to be in debt the rest of their lives in order to further their education.

I believe that the state and local government is the root to the problem because our economy has gotten so bad. Financial assistance has been taken from the higher education area of the state and federal government and placed elsewhere; therefore it is up to the school to find a means of having revenue and being able to function during lower enrollment times. There has to be a means of cutting areas in which they can in order to keep the doors open and continue to provide these students with the education in which they work hard for.

If the true price elasticity were (-1.2), discuss what you would suggest the university do to expand revenue:
It is very important for colleges and universities to measure tuition elasticity appropriately because they depend on tuition for income. In order for the Nobody State University to increase revenue they can increase tuition as long as they have an adequate student enrollment. Now, if the tuition elasticity is greater than 1 and the students are price sensitive then and increase in tuition rates may cause a decrease in total revenue and student enrollment.

The diagram below emphasizes my point and shows the equation theory in action. “Most straight-line demand curves look like the one in Figure 4.5.Demand curve D has a range of elasticity coefficients from infinity (at the intersection with the vertical axis) to zero (at the intersection with the horizontal axis). When the coefficient is less than 1, demand is inelastic because the percent change in quantity demanded is less than the percent change in price. When the coefficient is greater than 1, demand is elastic because the quantity demanded changes relatively more than the price. Of course, there are degrees of responsiveness. The larger the coefficient, the greater the responsiveness.” (Amacher, R., & Pate, J. 2013).

In the event that I were the president of Nobody State University I would definitely lower the tuition prices somewhat and attempt to balance the budget. By doing this it will be more appealing to future students attending the university as well as attaining a good profit from each student. The college in which I spoke of tends to pick students that are from the wealthier side of the street, I on the other hand would branch out and choose some from poorer schools and hope to have graduates giving back to the school down the road. High tech courses are becoming very important in our societies growth and specialization and with that bring a bit of a higher tuition, but at the same time I would attempt to provide minimal supplies in order to save money yet provide the means to succeed. These are just a few ways in which revenues can be expanded.

Using what you have learned in this course, explain how you would resolve this problem if you were the President of NSU: I currently work for an ambulance service that provides emergency ambulance services for special functions and athletic events for a local privately owned university here in North Carolina. My husband worked for this university for five years and the university offered employee assistance, spousal assistance and their children. Well, two years ago they took this option away from all their staff personnel and spouses stating only the employees children would be allowed to use the funding due to cut backs within the university. It has absolutely amazed me what has transpired since the day they took the college education assistance program away from their employees and their families.

The college has since purchased a mall in the city, close by the campus for millions of dollars in order to expand the university. They have  homes from the elderly in the city on every side of the college, stating they need to expand housing for future students with an expenditure of millions of dollars, a $10,000,000 expansion on an athletic facility has just been completed, parking be removed on campus in order to build a pond for beautification. Within the four years that I have worked as part of their event staffing seen the college tuition rise from $35,000 a year for in state tuition to this year rising to $40,000 and out of state tuition rising from $40,000 a year to now $45,000 a year.

Just this past year the college has determined that the mall that was purchased for millions of dollars will no longer service their needs because it will cost too much to remodel it in order to provide the needs of future classrooms. The college is now hoping the city will purchase it back immediately. I have worked functions in which high profile parents are catered to hoping they will send their students to school there, hoping they will donate funds to further the college’s future expenses. I see them been wined and dined and given gifts.

I have to say that I have become very bitter with the way this particular college functions as a whole. In my eyes it portrays the university to be all about money and the student’s education has been put on the back burner. I realize that with our continued economic issue and our state funding being decreased tremendously over the past several years play a big factor in college’s success right now. But, there are some things that need to be taking care of. “If you’re going to raise tuition, you have to provide adequate financial aid to provide access. It’s not happening. Increasingly, at all levels, financial aid is not need-based,” Ehrenberg says. “Private institutions are trying to `buy’ students by using money for merit aid more than for need aid. At the state level, more and more grant aid is merit-based or across the board, not concentrated on need-based.

At the federal level, when you increase loans, this appeals to the middle class. More and more aid is loan-based rather than grant-based.” (Gardner, S. 2005) In my opinion in order to attempt to resolve this issue this college as well as other institutions are going to have to reverse these sorts of trends and realize that our state and federal government are going to have to  higher education a higher priority. We all know that in order to prosper in this day and age jobs require a college education. These institutions are going to have to find ways of keeping tuition low and the quality of education these students are receiving high as well as providing financial aid for those that need it most.

I realize that most of the universities have had to increase tuition in order to compensate for the money they have lost at the state and federal levels and by doing this the cost of attending a university or local college the price has to be increased. The particular college I have spoken of I feel has over spent money for things the college truly did not need and at the same time causing the parents and students to have to eat the further increase this year in tuition in order to pay for these expenditures. This in turn has truly put a strain on parents and put a greater responsibility on the students in the long run having to pay these astronomical bills when they graduate. Going to college and working hard to learn and be able to function out in the work force is a struggle in itself and then have to add on such an expense on top of that.

In order to fix the situation our state and federal government are going to have to re-evaluate higher education and make appropriate tax and budget choices and stop excluding it and acting as if the problem will take care of itself. Our state is going to have to find different ways of raising revenue in order to rebuild our higher education system; these students are our future and will be providing the skills of our workforce of the future. As for the local college I’ve spoken about, they need to realize that spending needs to be done only when it is needed not for show and tell. Our children’s education is the most important asset, not flaunting dollar signs and spending money that would aid these children’s financial future.

Should Nobody State University Raise. (2016, May 28). Retrieved from https://studymoose.com/should-nobody-state-university-raise-essay 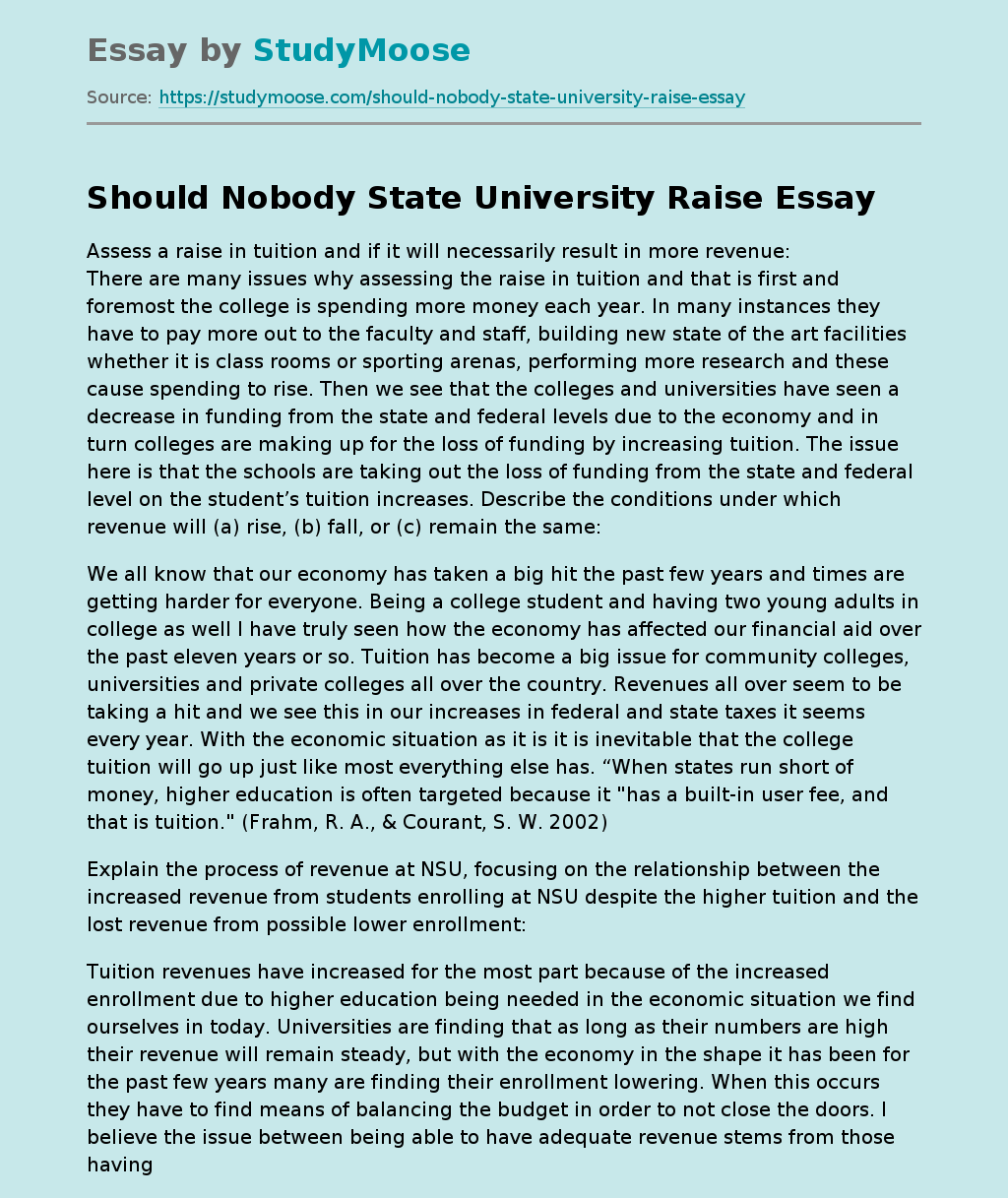