Should Juvenile Offenders Be Tried As Adults Criminology

In today’s society, there are many crimes going on. Adults are not the only ones that commit crimes. One issue today is that juvenile offenses and whether juvenile offenders should be tried as adults in criminal court. A common phrase that is often used in this case of young juveniles committing crimes is “Old enough to do the crime, old enough to do the time.” This phrase should be cleared to people that juveniles are not adults, and with this being said it will not make them one.

Don't use plagiarized sources. Get your custom essay on
“ Should Juvenile Offenders Be Tried As Adults Criminology ”
Get custom paper
NEW! smart matching with writer

“It has redefined juvenile offenses by treating most of them as delinquent acts to be adjudicated within a separate juvenile justice system that is theoretically designed to recognize the special needs and immature status of young people and emphasize rehabilitation over punishment” (Steinberg). While juveniles should be responsible for their actions, and should be held accountable for the crime, then the juvenile justice system is design to determine the consequences. Youths are still minors and are less mature.

They often face a lot of negative peer pressure. Therefore, juveniles should not be tried in courts as adults.

Even though the justice system knows perfectly well that most juveniles offenders are too young to truly understand the consequences of their actions, many juveniles are still transferred to adult courts for case hearing. A juvenile offender is someone who is too young to be tried as an adult. For instance, if a eighteen year old boy is charged as an adult with a killing of another boy, then he will be condemn to serve his sentence in an adult jail.

This boy could have the mind of a younger person but he still will be placed with the adults because by law he is an adult. Just because someone is eighteen years old that does not make them an adult.

An adult is considered to be someone who has reached eighteen years old by law, but some people do not have the quality that makes an adult. Adults know how to accept responsibility, have plans for the future and is financially independent. Adults generally know right from wrong just like how children do, but they know what can cause them to go to jail and what cannot. Jewish youth are declared adults in the eyes of their religion when they turn thirteen (New York Times Upfront). The age that someone is considered an adult can vary from city and based on their religion. Being considered an adult can be pretty harsh.

When juvenile is sent to adult jails where he/she has an adult cell mate, then they could be badly influence. Juveniles and adults being cellmates can cause the juvenile to get into more trouble. Adults will take advantage of them and put the youth up to do things they are not suppose to do. Juveniles will not be able to mature properly because the cell mate is not on his/her age group. Rather than the juveniles being sent to a rehabilitation center where he/she would have had the companion of other children who care in similar position, and could thus be educated in interest. The purpose juveniles should go to the juvenile court because it is a treatment and guidance rather than punishment (Cliff Notes).

By placing juveniles offenders in a place that was made for adults can take a toile on them. Although juveniles may know right from wrong, immaturity should be a reason for them not to be tried as adults. With that being said juveniles being charged with minor crimes should not have to go to a rehabilitation center nor jail. Criminal crime by juveniles should still be taken to juvenile justice system because they young children may be going through the stage of immaturity or negative peer pressure. Despite the severity of the crime juveniles are still children and are not developed with maturity quit yet. Holding teenagers responsible for themselves is not unique to our justice system (New York Times Upfront). Also, a rehabilitation institution has an advantage to adults’ prison in terms of their effect on the juvenile.

When a juvenile is sent to juvenile court the main focus is what they may be able to do to rehabilitate the teen. Being that it is a teen committing a crime they called it a delinquent act rather than a criminal offense. A criminal offense can make things worse than compared to delinquent act. Although most juveniles go to rehabilitation centers they do have juvenile prisons in many states and other places they can be sent instead of a rehabilitation center.

It has been found that ” changing the social environment in which juveniles live is a more effective way to reduce violence than punishing juvenile offenders in adult courts”( CliffNotes). If the youth has been to the adult criminal court instead of the juvenile court, then they will not have the right to go to a rehabilitation institution. Juveniles who commit serious crimes are being punished for their actions, but the possible solution to juvenile’s crime would be rehabilitation. By them going to this institution it can help them become more of a positive person inside and out. It is cleared that older adults and children are totally not similar, so they should be treated accordingly. If they are at a rehabilitated institution they are more successful in willing to learn.

As said in the article by Cliff Notes , “While the denial of full constitution rights for juveniles is sometime a problem, the juvenile court’s mission is benevolence- serve the best interest of children” ( CliffNotes, ). So by the juveniles going to a rehabilitation institution it can be better for them. It can help better them in so many ways. Ways they can better themselves: having the right of still being able to get an education, they could possibly have a job, they will not be influence by people if so then it would be peer pressure, be around people that’s around their age group so they can better relate. Being that they are teenagers they are still getting used to the surrounding so they will make mistakes regardless. When they make mistakes and are sent to a rehabilitation institution they will not have to deal with a whole lot of bullying by peers.

There is something that is called a “waiver”. A waiver is something for juveniles who have committed serious offenses and the court waived them from a juvenile court to an adult court (Aaron Larson). Sometimes juveniles have to get mandatory waivers where they will be tried as adults.

Some people may say a certain juvenile victim may need to go to the adult jail because of the crime committed and the adults can tortured them, but not too harshly. They may say this because if the child is that bad off then they could bring a lot of negative behavior in the rehabilitation institution. It should not be that way because every teenager has their times of displaying terrible behavior. Although they may not act accordingly at times they are still children. So therefore the rehabilitation will be the right place for them. The rehab is designed the help the juveniles become better positive young people. If they give the juvenile a chance then maybe it will work for them instead of just wanting to send them to the adult jail.

Every household should have morals for their family. Just because a family has morals it does not mean that when teens get around their peers that they will not act a different way from home. Some families do not raise their children with morals. A lack of human morals cannot be treated or cured in rehabilitation centers. Some things have to start from home to help guide children the right way. If children do not have no guidance when they get around their peers it will be very easy to influence them, they will often find themselves following the crowd, and even doing bad things to get attention. If a teen does something and they have to go to court and end up at a rehabilitation center but does not display morals then it is a possible change that, that child will always be out of control.

New York Times Upfront states “trying juveniles as adults sends a clear message that crimes such as murder, rape, and assault will not be tolerated and that perpetrators must accept the consequences of their actions”. Agreeing with this because if a juvenile commits one of these crimes and just have to attend a rehabilitation center for a couple of months or years, then if they are more of a rough neck juvenile with no morals they can come home and continue to do the same things. So that then makes courts systems wonder if it is a good idea to have juveniles go to a rehabilitation center with crimes like these.

Some teens have the maturity and judgment to make reasoned decisions. All juvenile are not mature and can make wise decisions just as well make bad ones. Many young people get driver’s licenses before they turn eighteen (New York Times). The way youths use their thinking skills to drive a vehicle they could do the same before getting involved in criminal behavior.

When juveniles commit crimes it does not guarantee when they become an adult their records will be sealed. These just vary from state to state. It can also be based upon the crime committed. If a juvenile has a sex offender charger then they would have to register as a sex offender, no matter what age they are for the rest of their life. Stated by Aaron Larson ” In some states which automatically seal a juvenile’s record once he/ she passes a certain age, that record may remain unsealed if the defendant is convicted of an adult offenses before he reaches that age.

Should Juvenile Offenders Be Tried As Adults Criminology. (2019, Aug 19). Retrieved from https://studymoose.com/should-juvenile-offenders-be-tried-as-adults-criminology-essay 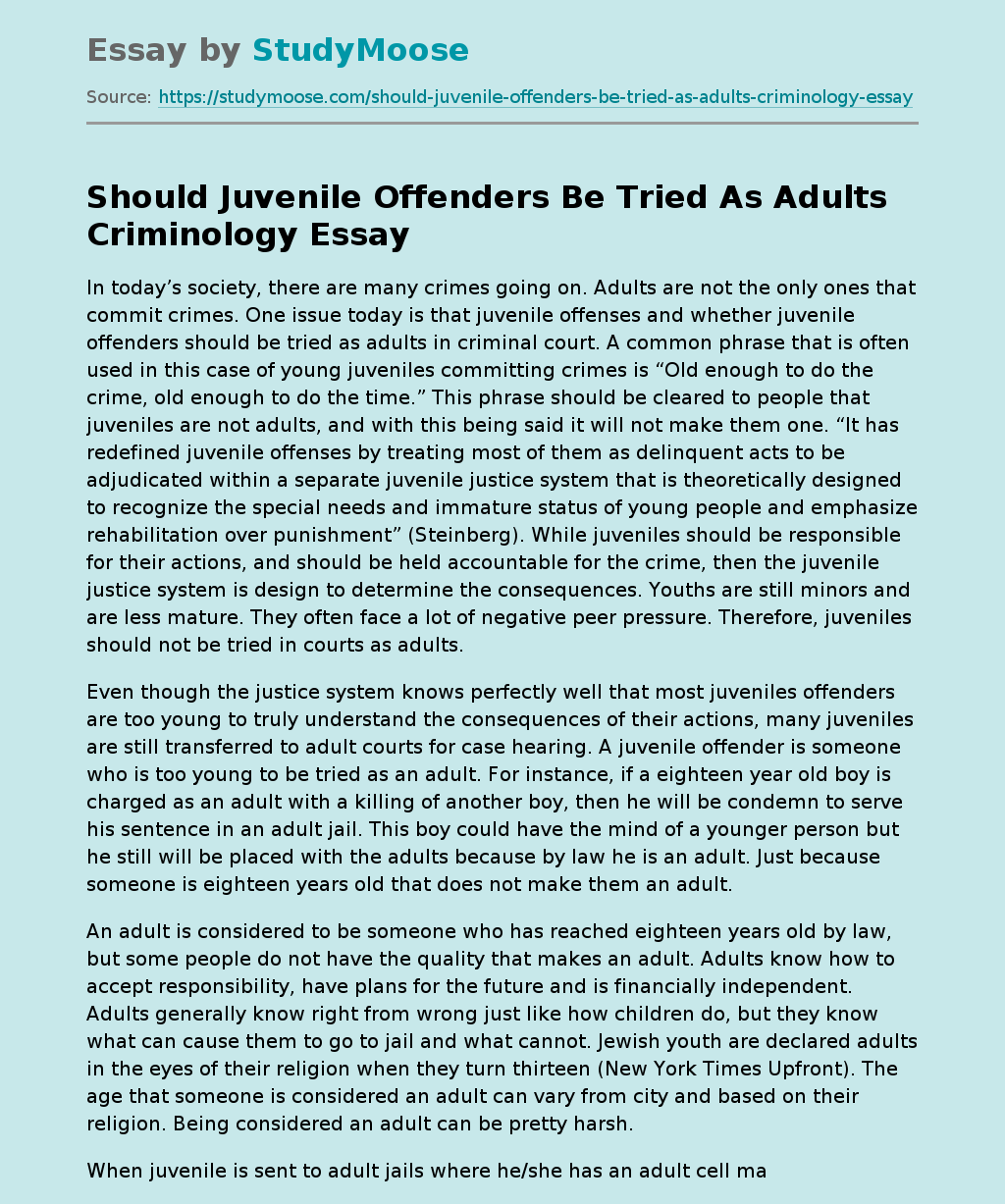