Should cosmetic surgery be banned?

Society have always valued beauty. Attractiveness often symbolizes an admirable protagonist, while ugliness indicates the abominable antagonist. People of every race and culture have gone to extremes in the name of beauty of foot binding in china to nose jib in 800 B.C India. Thesis Statement:

Despite the fact that attractiveness have distinct advantages in our community, more people want to do plastic surgery in order to survive in the society. In fact, Plastic surgery has a negative impact on our social media, society, and health risk.

Don't use plagiarized sources. Get your custom essay on
“ Should cosmetic surgery be banned? ”
Get custom paper
NEW! smart matching with writer

Social media: Social media platforms have revolutionized the way human beings communicate, yet there is an evidence to how the plastic surgery trend has adopted social media. 1st Argument: trend (celebrity influences on plastic surgery )Lips – Angelina Jolie was the overwhelming leader as the lips of choice for women undergoing this procedure. (identical looking people)The trend to have almond-shaped eyes or the trend to put fat into your forehead to make it look bigger and more proportional to the face.

This trends leads to the similarities in faces related to what happened in Korea in 2013 (the identical-looking Miss Korea 2013 contestants). 2nd Argument: Social Media Influencing Women to Consider Plastic Surgery (facebook, twitter, Instagram) Facebook and other social media avenues to seek friends or seek positions, re-contact old friends from high school and they want to present their best possible image.

(Causes people to get plastic surgery done at the young age) In fact, social media profile pictures are used as a way to make a first impression on an employer or opposite gender.

The American Academy of Facial Plastic and Reconstructive Surgery (AAFPRS) conducted a study which determined that one in three plastic surgeons are noticing a rise in the number of patients wanting facial procedures in order to look better online. Society: Society have always valued beauty over ability in such a way which creates a negative influence on younger generation. 1st Argument: create unrealistic body shape

Some people feel pressured by their spouse to remain youthful or become more attractive. Negative influence on young girls and makes them self-conscious about their physical appearance because of Barbie’s unrealistic body features.When scaled up to human size, Barbie dolls would have unhealthy measurement of and 18” waist, 33 hips and a 36 bust. However, a real women with Barbie’s figure would be anorexic.

Attractive children are more popular, both with classmates and teachers. Teachers give higher evaluations to the work of attractive children and have higher expectations of them (which has been shown to improve performance). Attractive applicants have a better chance of getting jobs, and of receiving higher salaries. (One US study found that taller men earned around $600 per inch more than shorter executives.) In court, attractive people are found guilty less often. When found guilty, they receive less severe sentences. Solution to personal and professional problems. While appearance has always been important, mainstream acceptance of plastic surgery has created a society that values appearance over ability. In society, there’s an idea that the prettier you are, the more benefits you get. People tend to be more inclined toward attractive people when they make decisions with jobs, and marriages.

3rd Argument: cosmetic surgery made people their originality look. (People should not be changing the way they are to be prettier because all they are come from their parents.) “It is the first step piety that body, hair skin are not allowed to be self- wounded because they were born by parents”, said Confucius. A Chinese man divorced his wife and sued her for giving birth to an extremely ugly baby girl. He accused her of having an affair because the child did not look like him or his wife. When the DNA tests came out naming that Feng was the father of the girl, the wife was acquitted. “I married my wife out of love, but as soon as we had our first daughter, we began having marital issues.Our daughter was incredibly ugly, to the point where it horrified me.”

5th Argument: People should not be changing the way they are to be prettier or anything because all they had are come from their parents Health risk: The result of the cosmetic surgery might not turn according to your desires. 1st argument: The confidence that comes from a new nose, fake breasts, or liposuction is only temporary – physically (many procedures are not permanent and need to be repeated) as well as emotionally. >>>>>>> this causes ( plastic surgery addiction) 2nd argument : Plastic surgery addicts go to extreme lengths to have the ‘perfect’ chin, lips, or breasts, but they don’t realize that there is no such thing as a perfect face or body. After one surgery, addicts will find a reason to have a second, then a third and so on in their quest for ‘perfection’.

Should cosmetic surgery be banned?. (2016, Mar 18). Retrieved from https://studymoose.com/should-cosmetic-surgery-be-banned-essay 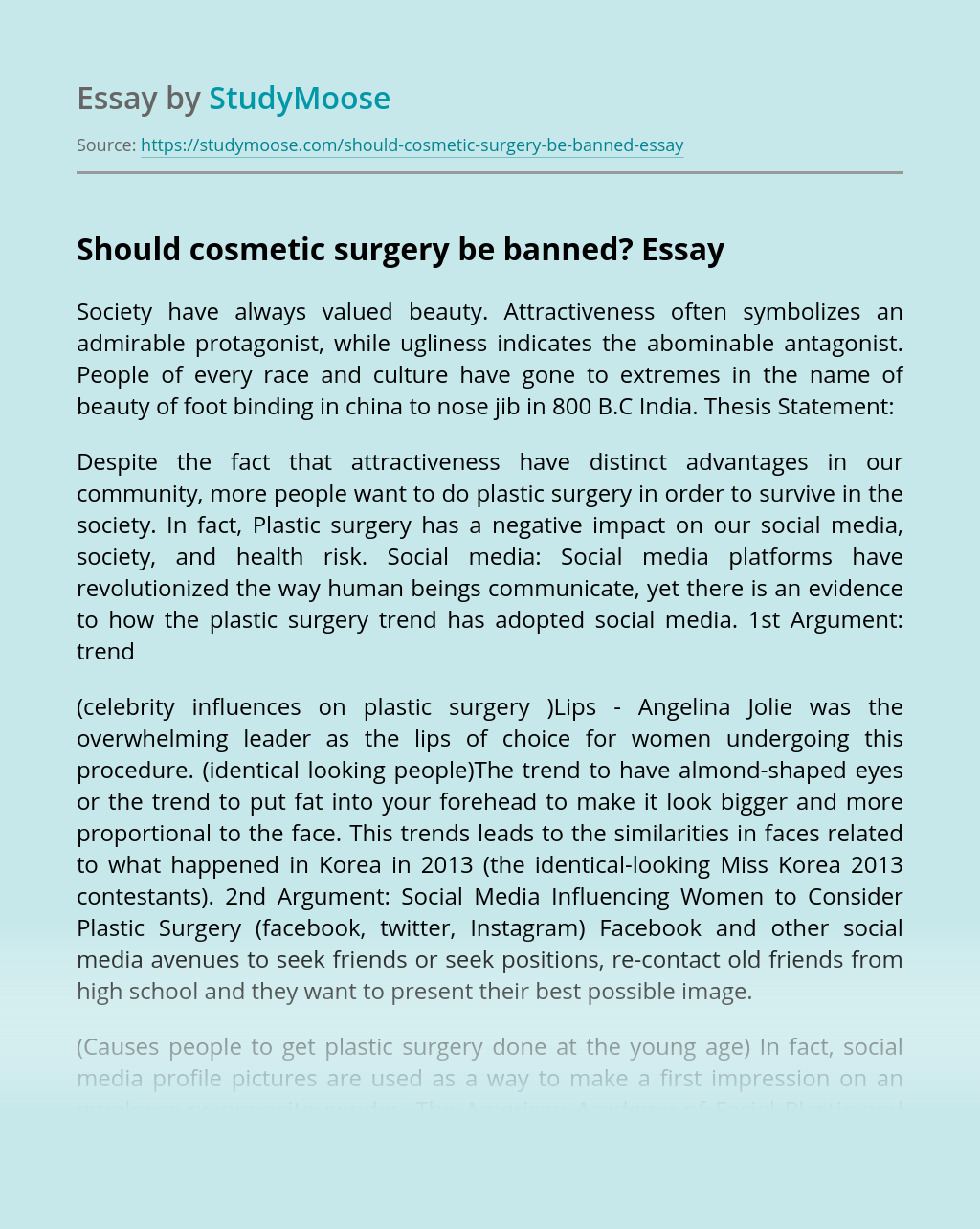