Should college athletes be paid

Specific Purpose Statement: By the end of my presentation, I hope to convince you on the fact that college athletes should not be paid to play their sport(s).

If you aren’t a professional then why should you get paid? Should students get paid based on the number of A’s and B’s that they receive? No. Athletes in college are not yet professional; they are not playing at the highest level possible and therefor should not be paid. Although the world today revolves around money, money, money, do you think that giving teenagers large sums of money would actually be beneficial? Having a job and earning money is what everyone wants to do, to be a professional.

Professionals are the ones that are paid to do their job, not amateurs.

Relevance: This topic affects all of us because whether you are an athlete or a student, we are all in college, and paying athletes would have an effect on all of us. It could affect our daily lives, our financial stability, or even simply our ability to afford a college education.

Credibility: I decided to do this topic because I have played sports all my life and even decided to pursue my love for the game by playing in college.

Also, this very well affects me because if the NCAA were to ever allow student athletes to get paid I would be getting paid as well.

Central Idea: Paying college athletes is not something that we should do. There are multiple reasons that this should not be done, and it can have a cancerous effect on the rest of college life at an institution.

Transition: There are many reasons that people give for the argument that college athletes should be paid. I would like to highlight some of these reasons in order to help strengthen my stance in the argument.

This debate first started when athletes started unions within their programs, taking this argument to court. Certain arguments based on stipends that could be given based on a programs success were points made in order to support that idea that college athletes should be paid. This would include ideas that the more successful a program is, the more money it brings in to the institution, and therefore the more money its athletes should be paid.

In a CNBC article by Mark Koba, he interviewed Ellen Staurowsky, a professor of Sports Management at Drexel University, asking this similar question. One of the points that she made in her conversation was that “as hundreds of millions of dollars are now made from college athletics, the NCAA rules governing the players must change to let them receive some of the financial benefits.” This is the main point of the argument that many people use in support of the stance that college athletes should be paid. Although this is a valid point, we need to remember that for an institution to offer a multitude of sporting events, it costs the institution a large sum of money to keep all of them running. If the athletes were to be paid, the money that the institution could make in order to fund all of the sporting programs would be used up paying only the athletes in the “big-name” sporting events at the institution. If college athletes were to be paid, that would mean that all college athletes, no matter what sport they participate in, would have to be paid. You cannot simply pay a football player more money than a rower or cross-country runner because they might be more known. All athletes of all sports would need to be paid equally, and this would cause the institution millions of dollars in order to keep all of the sports programs running.

Transition: There are pros and cons to both sides of the argument. Next, I hope to discuss both sides in order to shed more light on the debates that are taking place in the sporting world today.

There are many reasons that people have stated in support of paying college athletes, and there are many reasons that people are against the payment of these athletes. Some pros for the “pay for play” argument presented in a USA Today article by James Fitzpatrick include “paying athletes might help stem the tide of those going pro early,” giving the viewpoint that paying the athletes would keep them at their institutions longer rather than having the more popular “one and done” freshmen. This same article goes on to discuss various cons for this argument as well. Points like “non-revenue sports would have to be cut because there wouldn’t be sufficient funds” as well as the question of “where would the money come from, as most athletic departments make minimal to no profit in the first place.” One of the major setbacks for the argument in support for paying the athletes would be the Title IX lawsuit that states that all athletes of all sports would need to be paid equally and no single sport could receive more payment for their athletes than any other sport.

Transition: My third point is more along the lines of a con for the argument I have previously mentioned, the fact that student athletes should not be paid. Paying kids who are in their late teens and early twenties might not be what society needs.

How do you think the average 18-year-old kid would handle
a large sum of money? Would they save it in a bank or invest it in the stock market, or would they spend it on shoes, clothes, and other goods that they think were important at the time? Jason Cimple of wyattresearch.com writes that “78% of NFL players and 60% of NBA players file bankruptcy within the first five years of their retirement.” Why is this so? While many of these professional athletes are making a large sum of money during their playing careers, they are also spending a large amount of money too. They do not necessarily have the idea or knowledge that they will not be able to sustain their luxurious lifestyle after their paychecks stop coming in. Second, the average NFL career lasts only 3.5 years while the average NBA career is 4.8 years. That is not much time that these athletes are making this extravagant cash. Because their careers are so short, they need to be financially educated in order to turn their profession into a sustainable and livable source of income. A lack of financial knowledge, somewhat due to the fact that they may have skipped college, could be a factor in this. While in college, these athletes should take classes that help them manage their money, so they know what to do with it when they are done with college and

have the ability to make money as a professional. The college athletes should not be paid, bur rather take classes that help them understand what to do with their money in order to be successful even after their professional careers are over.

Transition: To conclude, I hope that I have convinced you to why college athletes should not be paid. We need to realize and take in to account all of the opportunities that student athletes are given during their time playing sports in college. They aren’t forced to play a sport, so if they want to quit and get a job in order to be paid, they have that ability. They are offered scholarships, a degree, and a great deal of experiences that cannot be replaced by simple monetary gains. For these reasons, college athletes should not be paid.

Review of Main Points: Today, I have provided you with reasons such as why people think college athletes should be paid in the first place, the pros and cons of actually paying them, and a direct reason to why they should not be paid, in my argument to support my viewpoint. I hope that you understand now why they should not be paid, or are at least more informed on this topic of discussion that is taking place in the world of sports.

End with Style: Yes, money is important, however once we are all professionals, whether it is in sports or work, that is when we should get paid.

Should college athletes be paid. (2016, Mar 01). Retrieved from http://studymoose.com/should-college-athletes-be-paid-2-essay 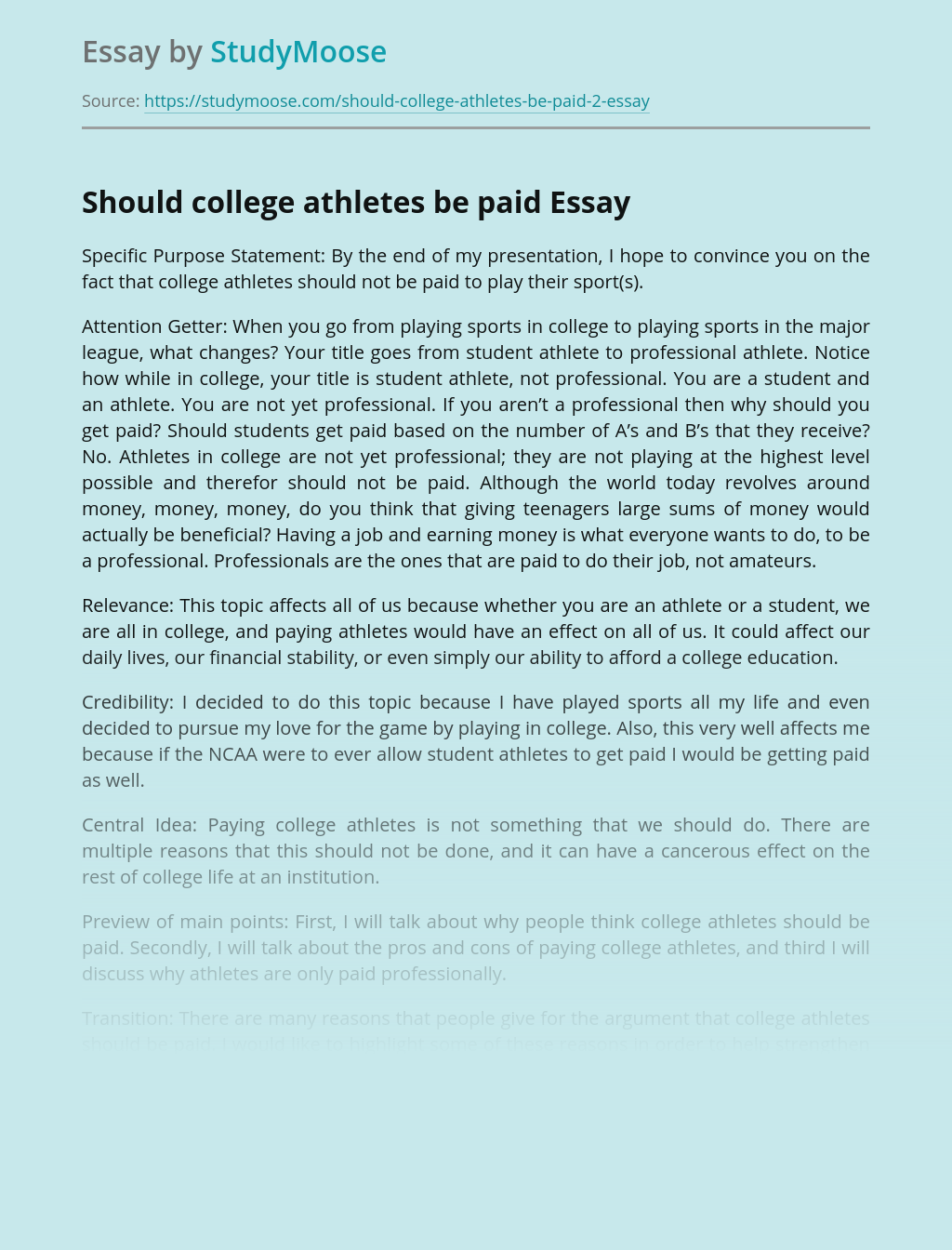 Don’t waste time
Get a verified expert to help you with Should college athletes be paid
Hire verified expert
$35.80 for a 2-page paper
Stay Safe, Stay Original