Should Athletes Be Allowed to Leave College Early for Sports

From past to present, sports have played a widely significant role in our history. Sports bring our communities together and offer fame to the athletes. Professional sports have been looked upon as a place of glory. From prestigious awards to high salaries, being a professional athlete is something most athletes dream of, but only a handful achieve. Growing up, many young children aspire to be professional athletes and strive to play even college sports someday. In recent years, athletics have been looked upon as equally, if not more, important than school itself.

Don't use plagiarized sources. Get your custom essay on
“ Should Athletes Be Allowed to Leave College Early for Sports ”
Get custom paper
NEW! smart matching with writer

Many athletes sacrifice school in order to be successful because the draw, competition, and demand for athletes has dramatically grown. This has lead to a smaller margin of athletes to become professional. It is a mad race of talent, hard work, and perseverance. This has resulted in professional teams draft players in college and sometimes even in high school. Athletes leaving their education early to play sports professionally should not be limited or cut off because of the many benefits of going professional earlier.

As the number of college athletes is on the rise, so is the competition and the demand for athletes.

Leaving early allows athletes to make more of themselves earlier. From a young age, we are taught to use our skills to the best of our ability in order to make something great of ourselves. This is exactly what these athletes are doing. They are using the skill sets they have to make something great of themselves As the above chart shows, there is an increase in the number of college athletes.

This has created a more competitive nature to college sports. Also, going professional earlier allows the player to make more money right out of college.

Professional athletes directly out of college have the potential to make a very large salary quickly. This money can go towards various things such as supporting a family, paying college debt, or making a living. These players also see a professional career as a once in a lifetime opportunity. Athletes strive to be legends such a Michael Jordon, Babe Ruth, Michael Phelps, and Derek Jeter. Many see a professional opportunity as a chance in the spotlight and a way to go down in sports history. Finally, athletes attend college to get the best job possible for themselves. However, as athletes, going professional is the best job you can receive.

These athletes should not be restricted by education. There are many rules and regulations that limit athletes to go professional. One may enter a draft as long as it does not conflict with their education, which is astoundingly easy because all that is needed is for the player to pass the California High School Exit Examination. Also, when in college, a student can also simply drop out and enter a draft. One draw back for athletes is that if one wishes to enter a professional draft, they must declare it by April 10th. This does not allow athletes to really test the waters of professional sports.

Instead, athletes must either cannonball in, or not take the risk. The National College Athletics Association, or NCAA, does not have the power or authority to stop these athletes but can only assure they are legally entering the professional league without any influence. However, the NCAA limits and restricts agents from contacting college athletes. Also, colleges are not allowed to offer benefits, payments, salary, or any other amenities. The NCAA rules limit the act of leaving college early. If the NCAA or college were to make changes that limit the college athlete, it will only be harmful.

A proposed idea to keep athletes playing their college sport was to only offer scholarships if the athlete commits to finishing out their education at that university. However, this would imply getting thousands of division one universities to all agree to this. Even if agreed upon, this would simply be rendered useless. If the athlete were to go professional without their college’s consent, the colleges do not have the power to pursue punishment. Also proposed was that the national or state governments were to enforce a law that made it mandatory to finish out a college education.

A law like this could never pass because of all the complications it provides. Complications possibly include changing all standards and the unfairness to non-athlete students. Students that do not play any sports will be forced to finish their university education even if complications arise. Not to mention, the government would have to have funding to support the students who cannot afford college. Finally, keeping athletes in college will only increase their risk of injury. Sports are physically exerting and always offer the chance for a career ending injury.

If a college player receives an injury during college, they may not be able to afford surgery or rehab. However, on a professional team, they offer rehab and while injured, the player still receives a salary. Injuries can cost the player millions of dollars. It limits their ability and makes their overall value plummet. An example of this is USC’s star quarterback Matthew Barkley. Instead of going professional and not finishing his education, he stayed at USC to get his diploma. However, during a crucial game against UCLA, he suffered a big hit and dislocated his throwing shoulder.

This resulted him in not finishing his season and instead of being a first round draft pick he got drafted 98th and lost an estimated $10 million dollars on his contract. In contrast, Robert Griffin III, left early form Baylor University and was drafted 2nd in the NFL draft with a $21 million dollar contract. This demonstrates that leaving early is actually beneficial to the athlete. If a new rule were to pass that restricted athlete’s ability to leave early, the results could dramatically affect athletes, colleges, and professional sports leagues.

Athletes would be missing out on an opportunity to follow their dreams while risking their bodies for injury. However, the athletes will always have a back-up plan in case their career does not work out in sports. Also, it takes time for college athletes to adjust to professional sports so delaying that process can only be bad. For colleges, the results would be positive. They would be able to keep their athletes until they graduate. This would greatly increase the intensity and level of playing at the college level.

Finally, professional sports league will not have to offer such large salaries to college athletes because they will not need to persuade the athletes to leave college. Athletes in college should be able to leave for their career. Arguments have been made that athletes should finish college to receive their degree so they have a back-up option if sports fail. However, athletes that play professional sports have no need for a college degree so staying in college is not needed. Also, professional athletes make large sums of money quickly in their careers, so a short career is acceptable.

After leaving professional sports, athletes can always go back to school. School will always be an option, but going professional is not. Bryce Harper justified leaving high school early for professional baseball by stating, “Everyone’s initial fear is that they may get hurt while playing…but even if that injury happens, you can always get your degree” (Harper). Athletes’ peaks in their careers tend to be very short, so missing out could have major consequences. There are always going to be circumstances when an athlete goes pro but ends up failing and is left without a degree. However, isn’t this with any job?

If an accountant were offered a six-figure job before graduating, you would be a fool not to take it. Other students in other departments, such as media arts, theatric arts, accounting, and many more, leave college early because they already have the skills necessary to succeed in their field of work. Athletes who wish to leave also have those skills. Sadly, people see sports as a risk, but so is any other job. Leaving early from college is not a decision that should be restrained. Others may argue that professional sports offer a dream that is irrational. Sidney Cross stated, “Some athletes do give a false sense of hope.

Not everyone can be a Kobe or a LeBron” (Cross). This is true. Not everybody can be the multimillion-dollar player like Kobe Bryant or LeBron James, but these hopefuls deserve the chance to chase their dream. Carey Bailey, head coach of the Bison football team said, “If you have the opportunity to make the same, or if not more money that you would in college, go ahead and make that choice” (Bailey). This is exactly the case. Players have the chance to make more money than they most likely will at any other job, so why not? Athletes’ choices are something that is their decision to make.

Athletes deserve the right to make their own decisions. They are legally adults. Who is anyone to limit them from following their dreams? Being an athlete is the same as most jobs. Going to college is not necessary in their job field so why should they continue to go? That is the equivalent to someone striving to be a lawyer to attend medical school. It is useless. It is time to accept that an athlete leaving their education early to play professionally is just apart of the game. Overall, no one should try to limit athletes and decide for them if they should leave college or not.

Should Athletes Be Allowed to Leave College Early for Sports. (2016, Oct 03). Retrieved from http://studymoose.com/should-athletes-be-allowed-to-leave-college-early-for-sports-essay 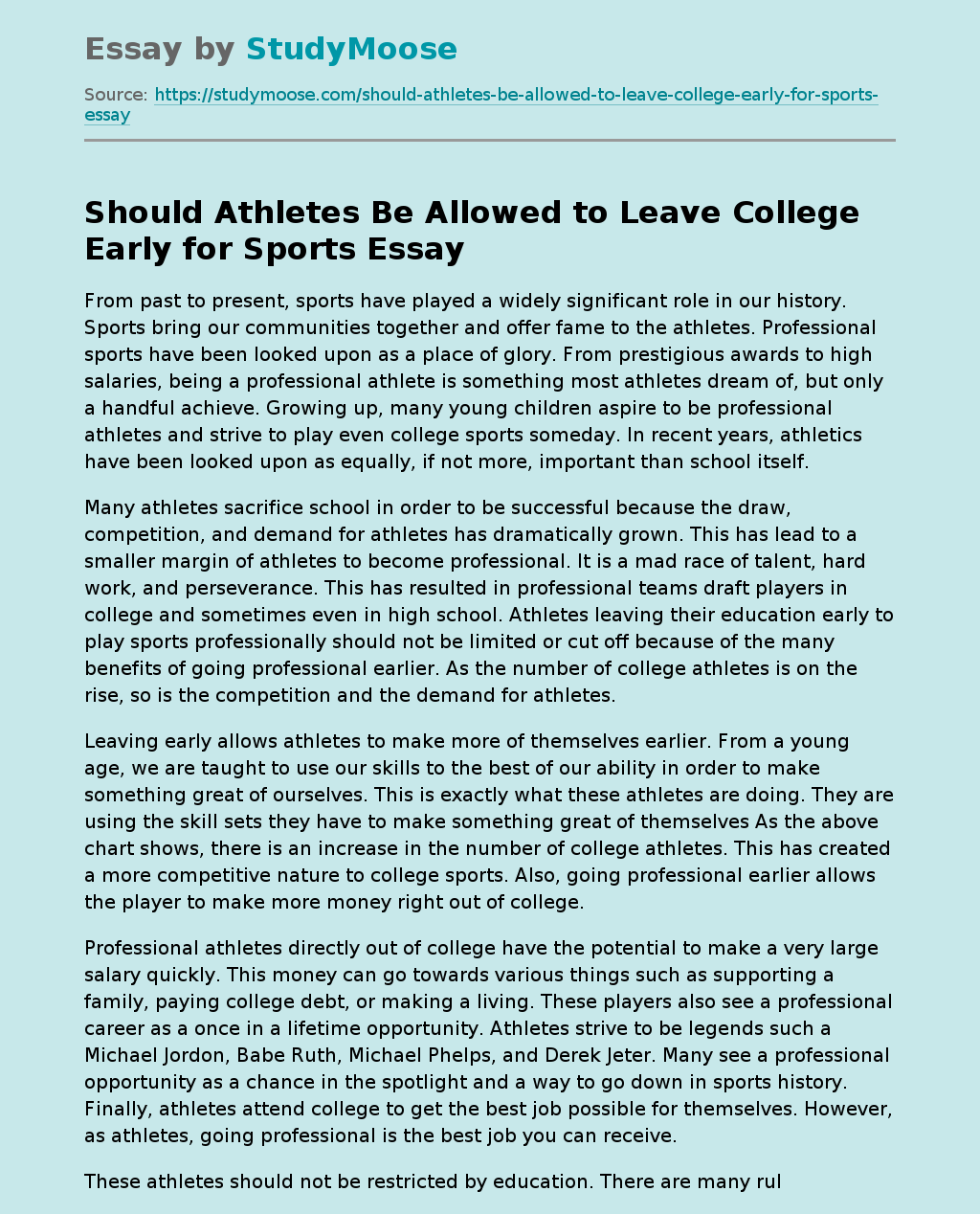