Alice Walker, in a short story called Advancing Luna- and Ida B. Wells, reflects back on her life to a friendship she had with a white girl in the sixties. She does so in a approach to which she justifies herself and her actions with still a sense of uncertainty. Through her language and descriptions it is clear that Walker is still struggling with the structure to which this friendship relied. She tells of her relationship with Luna in a state of confusion, searching for answers and yearning for closure.

Don't use plagiarized sources. Get your custom essay on
“ Short Story Advancing Luna and Ida B Wells ”
Get custom paper
NEW! smart matching with writer

While reading Walkers piece I felt an immediate connection. It was the end of the second paragraph that caught my attention most abruptly. Walker wrote, she assumed of course (I guess) that I did not wish to ride with her because she was whiteyet I was struck by her passivity, her patience as she sat on the truck alone and ignored(86). This passage caught my attention because it was something that I could relate to on a personal basis.

If I were Luna in that situation I may have thought my whiteness the reason Alice Walker would not ride with me.

More so though I realized that I often am conscious of the fact that people might assume my actions to be racially motivated when they are not. Racial consciousness is something that develops in a person or group over time. As it develops, they become more assuming and more aware of interracial interaction. If you are not aware of racial discrimination you tend to overlook it and/or ignore it.

Although it is not always the fault of the person but rather ignorance, racial consciousness is a behavior that needs to be learned.

Maybe someday it will be automatic or irrelevant but in order to progress it is necessary in todays society. Becoming race conscious is not an easy task per-say, in fact, it takes a great deal of time and effort and you never really stop learning. For me it took at least a year if not two living as the minority on a hall in boarding school. It took building friendships very slowly and cautiously. Patiently and passively earning trust by listening, learning, and sympathizing. I knew my role right away in that I was the minority, but it wasnt so immediate that I felt it.

I assumed as did Walker in the story. I assumed that we would all get along, hang out, bond, and be friends. And, we did, we were all great friends by the end of the year. It took me realizing what exactly whiteness meant, understanding white privilege and not being ashamed, hearing stories of prejudice or ignorance without being offended, learning the culture as a guest, and understanding the difference in whites as a race and me as white.. I had for once the feelings that minority creates everyday. The fear of rejection and hatred based on my race.

I had never felt those feelings because I grew up in white suburbia. I was so curious but yet had to be so patient to earn that bond. In reading about Luna I felt as though I knew exactly what she was feeling and could expand so much on the portrayals that Walker gives. The feelings she had towards herself and her race; ashamed, disgust, hatred, and even guilt. Embarrassed for being white and having white privilege; confused because I didnt ask for it and I didnt want it to be such an issue. The more I learned though, the more I understood.

After a while I could speak freely and I was confident that I could ask questions without being seen as offensive but genuinely curious and concerned. I wanted to learn as much as I could about cultures other than mine and push harder and harder for equality. The more I learned the more comfortable I became with speaking about racial issues, I became more aware of racial conflict and more concerned with putting an end to it. In this short story I saw a lot of myself and my feelings in Luna. I felt that I could explain in more depth the reasons she hated her mother; the money her family had, and her passion for equality.

As the essay went on I felt more and more connected to Luna. By the end I felt so in touch with her character that I could provide Alice Walker with the questions she wanted answered and even more-so that I could provide closure to the story. I wanted to just call her up and tell her that Luna was really raped and she had no reason to doubt her. Explain to her why she didnt mention it for five years; that she finally felt that bond in a friendship that goes beyond race. I felt the courage that Luna mustve had to test the strength of the bond and the hurt when it broke.

Interracial relationships are so much more difficult and complex than same race relations. This can be directly correlated to the long-term intergenerational discrimination against minorities through the power of whiteness. In Advancing Luna- and Ida B. Wells, Walker illustrates her personal struggle with an interracial relationship. She showed that no matter how close you become with someone race still plays a role. Walker explains the story through her own eyes but I read the story through the role of Luna. 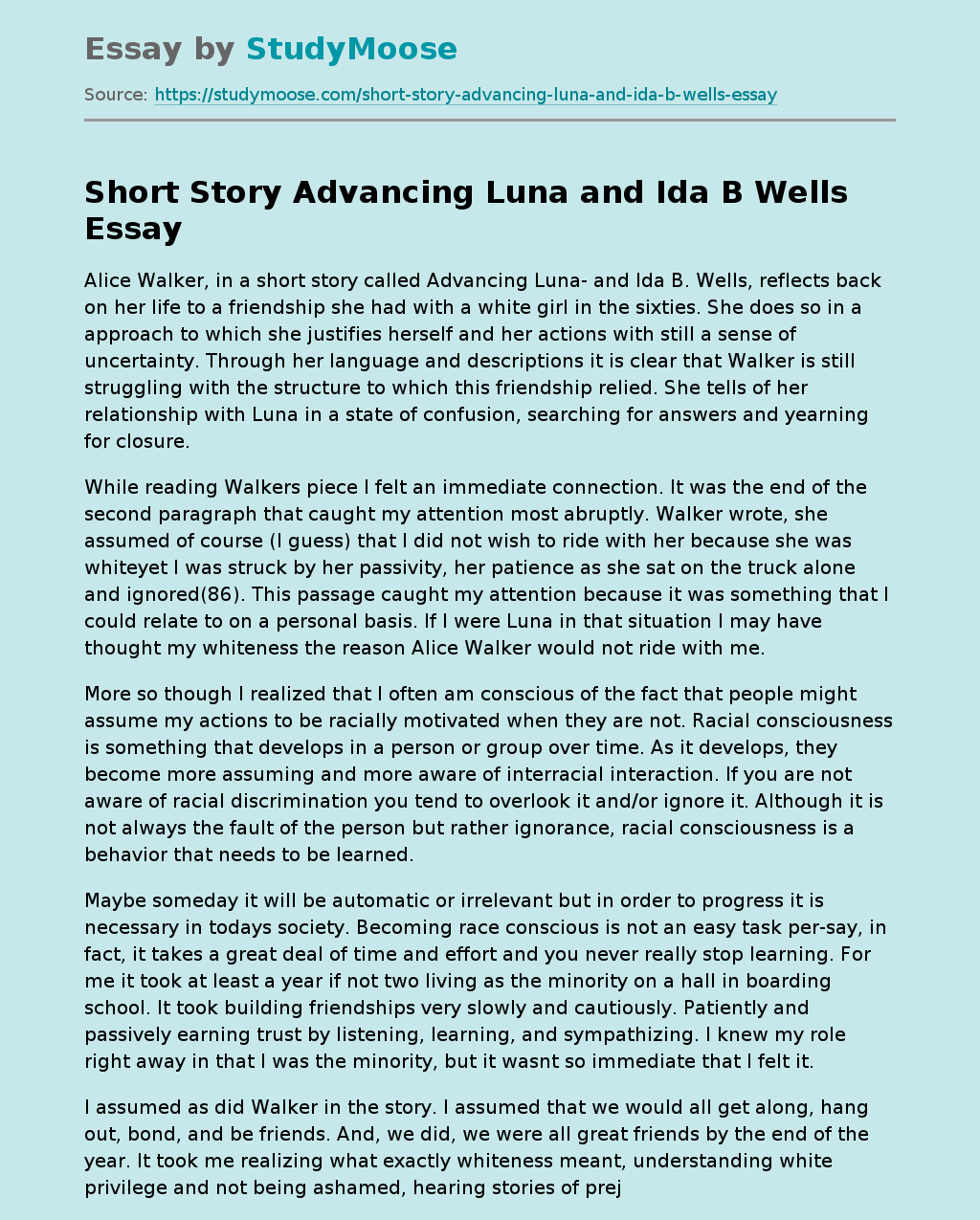