Distinctively visual explores how we see and or visualize images in a way that allows us to become aware of various aspects in society. The play, The Shoe Horn Sonata written by John Misto and the film clip Stupid Girls by Pink, use distinctively visual elements to create a sense of awareness about women. Misto’s script pays tribute to the Australian female nurses in WWII, revealing the realities of war through the strength and resilience of Bridie and Sheila. Similarly, the characterization of the ‘stupid girls’ in Pink’s film clip, highlight the toxic messages of consumerism aimed at young girls.

She ironically does this by exploiting her celebrity status through the media. Both composers position the responder to question the past and the media, and realize what woman have gone and are going through.

In The Shoe Horn Sonata, Misto reveals the ignorance portrayed by the British and Australian government towards the women held captive in old Singapore. The contrast between the projected images of the “1942 Singapore” and the accompaniment of the patriotic song ‘Rule Britannia’ emphaises the idiotic attitude of the British government, as their belief towards the Japanese invasion was seen as surreal.

This is further highlighted when the British state “don’t listen to rumour”. As a result of the British’s attitude the vivid images of “burning ships” and “women prisoners of the Japanese…skin and bone and dressed in rags” position the audience to become aware of the selfish views by the British. Similarly to this, the Australian government’s advice to “keep smiling” ironically implies their ignorant view towards the women.

This is contrasted with the projected images of “Prime Minister John Curtain…quite distressed” and “emaciated male prisoners of war, starving” showing his concern for the dying male POWs. This shows an existence of sexism in which Misto positions us to become aware of this issue, raised during wartime. Misto uses ignorance of the British government to show the strength of these women who from the beginning have little support from a supposedly ‘great’ nation. Their ignorance becomes another struggle these women have to overcome in their journey to freedom. Showing what these women were up against, Misto demonstrates the significance of this event in history.

By experiencing times of hardship, the strength amongst individuals continues to grow. Misto presents this through the motif of the shoe horn which becomes not only a survival tool but a catalyst for the growth of the relationship between Bridie and Sheila. In scene three the shoe horn is physically shown when Bridie and Sheila retell of their survival in the ocean, in which Bridie used it as a buoyant for Sheila. This is accompanied by the sound effect of waves which allows the audience to visualize the setting and empathise with the struggle they endured. At the play’s ending, the spotlight of the shoe horn is the final object seen by the audience, highlighting the significance of this object, representing all memories of the POW camp The ‘Blue Danube Waltz’ accompanies the shoe horn, which symbolises a sense of freedom as it becomes “the music of joy and triumph and survival”.

When Sheila uncovers her buried past “So I went to the Japs” the shoe horn is revealed as a tangible object, highlighting her fearful memories of when she sacrificed her virginity to the Japanese. This depicts not only the horrible realities of war but also the strength of Bridie and Sheila’s relationship as Sheila states “I couldn’t let you die and leave me, I wouldn’t have survived”. The shoe horn was also used as a metronome for the sonata which showed a sense of unity and strength amongst the women, who fought to survive “fifty voices set us free”. Misto positions the audience to identify the suffering and pain these women had experienced, thus become aware of the harsh realities of war. However it is through their strength within themselves and as a group that allows them to survive.

Conversely to this, Pink uses symbolism to show the influence of consumerism on the youth and the messages portrayed by the media. In the first scene Pink’s choice of age is used with the little girl representing innocence holding a Barbie doll signifying consumerism, emphasizes the influence that has already impacted on young girls. The juxtaposition of the angel and the devil symbolizes the choices that young girls face in order to live a normal lifestyle. In the bowling scene, the close up of the inflatable breasts shows the absurdity of the shot and emphasise the focus on ‘body’ rather than mind. This suggests that the media is convincing young girls to act, behave and be a certain way. Consumerism is dangerous as it can lead to more serious consequences e.g. eating disorders and oversexualisation. Pink positions the audience to not only identify this issue but to take action so to prevent this happening further to the younger generation.

Like Pink, Misto shows how the ignorance of the British has led to a deadly consequence of the women being held captive as POWs. The unconvential line of “if only they had” suggests that if the British had believed the invasion was occurring, then they would have saved more lives. Unlike Misto, Pink uses satire to manipulate the celebrity lifestyle to which young girls look up to. In the bulimia scene, when Pink states “I totally had more than three hundred calories today, that was so not sexy” followed by the close up of the toothbrush symbolizes the expected way to loose weight, hence body image is seen as a priority for young females. By cutting between the sex tape and car washing scenes it conveys the oversexualisation of the popular culture in contemporary society, to which Pink states “she’s dancing in the video next to fifty cent”.

This suggests that through the actions of female role models, young girls are influenced to act like a “stupid girl” in order to live up to society’s expectations. Thus Pink positions the audience to become aware of the false images that these celebrities portray. Like Pink, Misto conveys the struggle that these women endure in order to survive, through the symbolism of the caramel representing their only luxury of food, which Misto positions us to empathise with their struggle. This inevitably shows the strength of the women prisoners but also the strength of women who fight to raise awareness about issues in the contemporary society.

Both texts provide a detailed analysis on the struggle of women in the past and in today’s society, positioning the responder to identify with their pain and suffering. Through the use of distinctively visual elements, Misto emphasizes the strength of these women who fought to survive whilst experiencing the horrible realities of war as POWS. Similarly, Pink’s use of distinctively visual elements portrays the toxic and false messages the media impose on young females in order to live a ‘celebrity lifestyle’. However both the composers enable the audience to empathise with these women during wartime but to also take action towards the issue of consumerism amongst female teenagers. 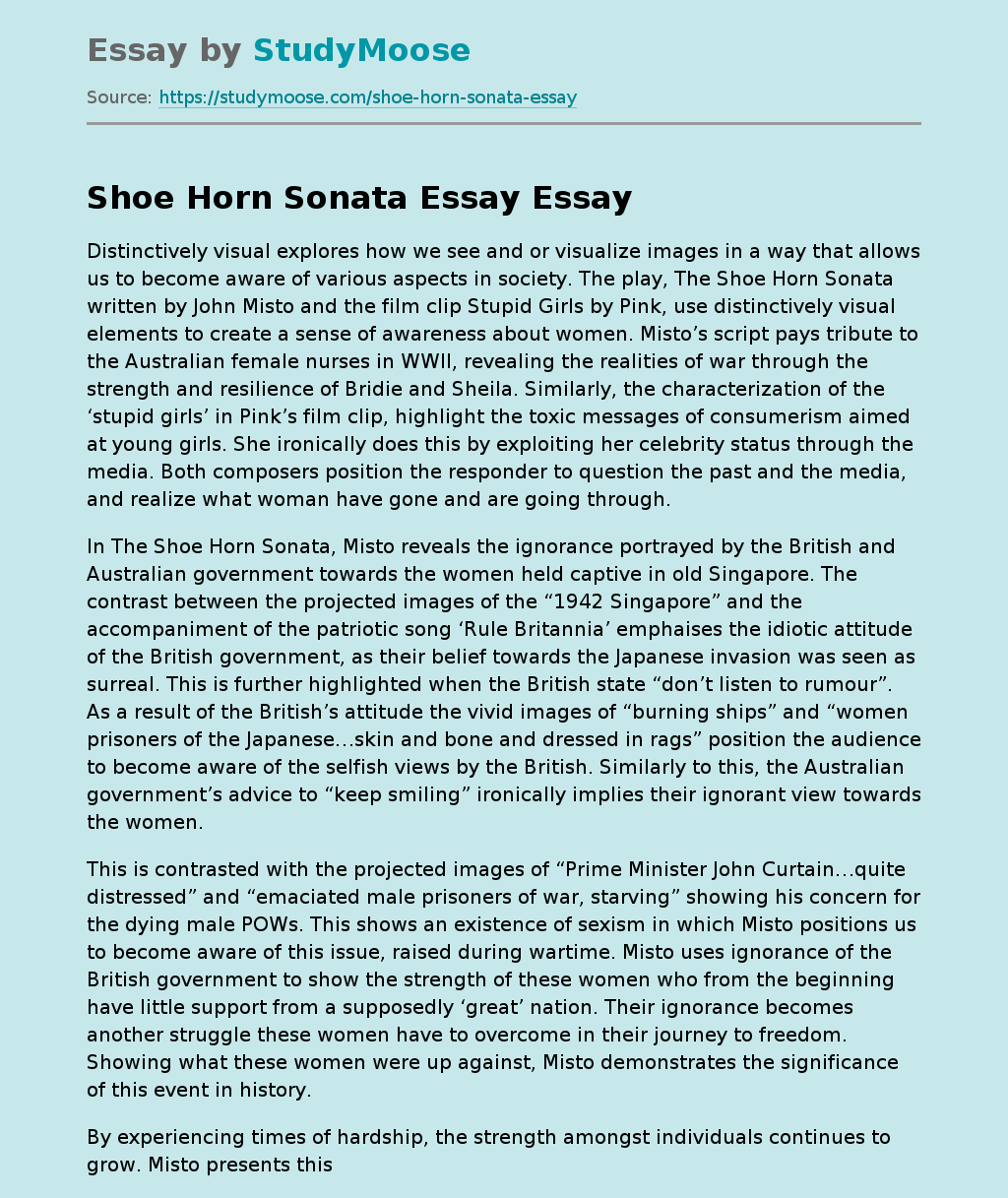