Photographs are a chilling reminder of the truth behind these women’s recounts, and an acknowledgement of their strength. Misto uses photographic images to achieve several things within his play. Firstly the images transport the audience to the world which these women are describing through their dialogue of memories. In Act One, whilst Bridie describes the evacuation of Singapore and the naivety of the British to attack, the images of Singapore allow the audience to understand the magnificence of the city prior to its attack.

The photos transport the audience to this setting and validate Bridie’s description of the city and indeed the attitude of British Society at the time. The image of a sign put up by the government at the time saying ‘dont listen to rumour’ reinforces the attitude she developed about the British governments approach to war.

Similar to the use of photographs to enhance and validate a setting, Weir draws visual comparisons between the sparse, lifeless deserts of Australia and those of Egypt.

In doing so, suggests that these men’s struggle is thoughtless and insignificant in the greater scheme of things. As well as this many of the Australian scenes are shot with a tighter lens than those in Gallipoli, indicating that once they had entered war they became little more than numbers.

Misto also uses excerpts from more than a dozen songs from the period. The use of song and of instrumental music has several purposes. First it shows in actuality to the audience the soothing and uplifting power of music, which as the audience is informed was a crucial feature of the ‘life support’ system in the camps.

This is clearly shown in Act One Scene Seven, when a group of aussie soldiers show up at the womens camp – singing is heard on the soundtrack, the voices of twenty or thirty men singing “O, come all ye faithful”. This is followed by a group of women singing “God Rest Ye Merry Gentlemen”, and Bridie’s hopeful dialogue “while we sang there wasn’t a war, there was only peace on earth”. This visual element accompanied by images and dialogue add’s emotional sub-text to not only the joyful scenes, but the painful one’s too.

Alternatively the music has been carefully selected in Weir’s film to accompany the scenes and different settings. Quiet or sombre moments at Gallipoli, and the closing credits, feature the Adagio in G minor, by Albanoni. It is slow, dignified orchestral music featuring mainly stringed instruments, and filled with a sort of dread and grieving. It is introduced in the scene where the soldiers are ferried to the beach which is to be the scene of battle, and also when Archie visits Snow who is obviously dying from his wounds. This music is very emotionally charged, and lets us feel some of the fear that would have filled the hearts of the young men.

The ultimate purpose of a drama like this one is to engage the audience in the experiences, this in done in various ways such as lighting. The use of lighting visually

reinforces the harshness of events and highlights the tension that exists between the characters or between the women and the Japanese enemy. When Sheila is describing the boats under attack by the Japanese, the English crew yell “Get up! Stand up! Let the Japanese see your just women and children”. Here Sheila stands, fixed by a very bright spotlight. The use of the light helps recreate the events on the boats for the audience. “Some mothers clutched their children and cried. And we stared into the spotlight”. Not only does this emphasise the terror felt by Sheila but it is symbolic of the harshness and cruelty of the enemy, something Misto has tried to consider visually throughout his play.

Alternatively in Gallipoli, ‘two-shots’ or shots where two heads are shown in close-up range are used generously as a visual feature. In moments throughout the film when there is a need to introduce intensity either through the closeness of friendship, or of conflict, note the use of close ups. When Major Barton and the British Commander discuss the battle about to occur in the Nek, they are in close-up, but also shot from a low angle to convey the superior position they hold, ,making them appear more dramatic. There is a shot at the end of the film when Archie and Frank stand on high ground at Gallipoli and we hear the sound of machine guns and screams.

Both of the two are motionless and shot as silhouettes, which gives the shot an eerie, disturbing feeling. The Shoe-Horn appears throughout the play as a prop, however its deeper meaning is recognised through symbolism. The title of the play first suggests the importance of this motif as a visual element throughout the play. It is a symbol of the loyalty and friendship that the women had to each other, and also helps them to tell the stories they had not spoken of in so many years. In Act One Scene Seven, Sheila alone, goes to a drawer and takes out a shoe-horn, looking at it sadly.

Misto effectively uses the distant sound of crickets to highlight that Sheila is hiding something. It then later becomes evident that Sheila did not trade the Shoe-Horn for Quinine to save Bridie but instead she sold her body. This act of selflessness creates sympathy for Sheila and her actions. In the final scene of the play whilst the women dance to the Blue Danube the stage darkens, except for a very bright spotlight on Bridies Shoe-Horn, this visual contrast represents the healing power of the truth, and the object which has once again bought them together.

Gallipoli includes many images and symbolic ideas which hold a deeper meaning, just like the Shoe-Horn the symbol of running appears from the beginning to the end. This repeated running motif links Archie’s and Frank’s journey together. It is how they meet, and how their ‘journey’ ends. The spirit of the running changes; it starts as a friendly rivalry and ‘game’ in the minds of these young adventurous men, an ends as Frank runs to save Archie and the other soldiers’ lives, and as Archy runs literally for his life – to his death.

(Conclusion – Sum up argument and include sentence below)
Both of these texts are powerfully visual and demonstrate how friendship grows even in the most unlikely situations, through shared experiences and adversity. 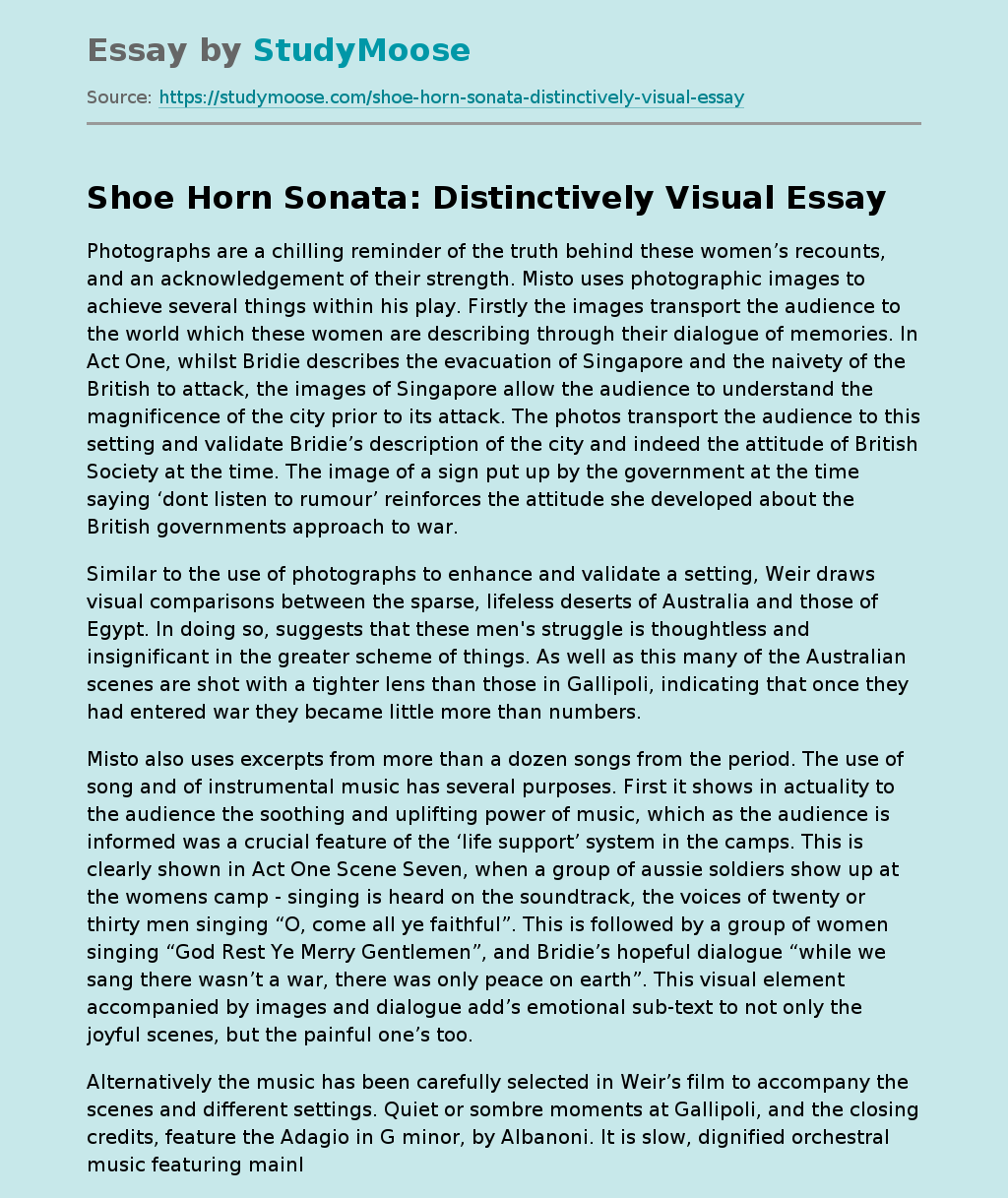