Distinctively visual texts use a variety of techniques to convey the experiences during the war. In John Misto’s 1996 play ‘The Shoe-Horn Sonata’ which is about women nurses enduring Japanese POW camps, such distinctive experiences as power and survival are shown through techniques like lighting, projecting image, sound, symbols, dialogue and body language.

In Kenneth Slessor’s 1942 poem ‘Beach Burial’ he also comments about survival in war and the power in distinctively visual ways through particular words. He relies upon adjectives, personification and the use of imagery to describe the suffering.

In Nick Ut’s photograph from 1973 ‘The Napalm Girl of Trangbang’ which is about the Vietnam war and these children being soaked in napalm being burnt, the distinctive visual experiences of truth and trauma of are being shown through the use of vectors and shading.

The distinctive experience of survival is shown in Misto’s play, The Shoe-Horn Sonata. Misto uses distinctively visual techniques such as sound, lighting, symbols and voice over to allow us to understand the concept of survival.

In a scene the soldiers yell out ‘jump for it! ‘Jump for it’ which conveys a sense of urgency and fear of what the Japanese are doing if they don’t listen. This shows the theme of survival and power that the soldiers have. During this scene the technique of sound is used. The piercing yells and the sound of the woman jumping into the water impacts the audiences understanding of what exactly is going on and how they should respond to this.

Later in the scene the use of irony from Bridie when she says “ the woman who had jumped were floating quiet well- but that was because all of them were dead”. Visually, the irony shows the theme of survival for Bridie and Sheila as they hadn’t jumped yet and it also represents the truth. This depicts the characters experience as one that was of hardship and struggle, living constantly in fear for their survival.

Misto uses other distinctively visual techniques to convey power. In scene 8, sound is used to show the power of the Japanese. Shiela says “and we could hear you scream -even by the fence- and it wasn’t a human sound by them” this imagery and sound is used to show a mental picture of bridie screaming which unsettles the audience. It reveals her deep suffering and the inhumanity of her captors in not helping her. This visually highlights the complete sense of power the Japanese had over both Sheila and Bridie.

The distinctive experience of power and survival is shown in Kenneth Slessor’s poem, ‘Beach Burial’ The use of colour imagery and similes of the men’s inscription being ‘as blue as drowned men’s lips’ and “vast number of dead sailors” “the blue lips of the drowned bodies” is disturbing as it vividly paints a picture of their lifelessness in the audiences mind. Colour and death is used in the line “the breath of the wet season has washed their inscriptions”

In the second stanza the distinctive experience of power is present. The use of the technique of imagery and emotive words “to pluck them from the shallows and bury them in burrows’ tells us that the soldiers were strong, loyal and had enough power within a degree to assist fellow soldiers. The use of personification to create sound “sob and clubbing of the gunfire” This leads the audience to understand what the soldiers were up against without even directly saying it. The imagery visually shows the scene in their minds.

In ‘the napalm girl of trangbang’ distinctive experiences of truth and trauma of war were shown. The use of vectors and shading were able to capture these visuals for the audience. Vectors are created by the horizon dividing the sky and the land, and the different levels created by the heads, arm and feet, tallness of the bodies, the road and the scrubland and the positioning of people in the foreground and background.

The vectors gave us the realization of the important features of this image and allowed us to focus our attention into the finer details like the facials of the children. Shading directed your eyes to different areas of the frame and created differences in the people and the road. It acted as a sense of guidance for the importance for certain objects within the image. This allowed the audience to see the truth behind what was going on in the image and what purpose was behind it.

As seen in John Mistos 1996 play ‘The shoe horn sonata’, Kenneth Slessor’s 1942 poem ‘Beach Burial’ and Nick Ut’s Photograph ‘The napalm of trangbang” distinctive experiences such as power, truth, trauma of war and survival can be conveyed through a variety of distinctively visual techniques. These techniques include sound, lighting, projecting image, emotive words and imagery. All these visual techniques work together to create vivid and memorable images that convey these distinctive experiences. The use of these visuals, impacts the text as a whole by leading the audience to certain impressions and understandings but that can be open to interpretation. 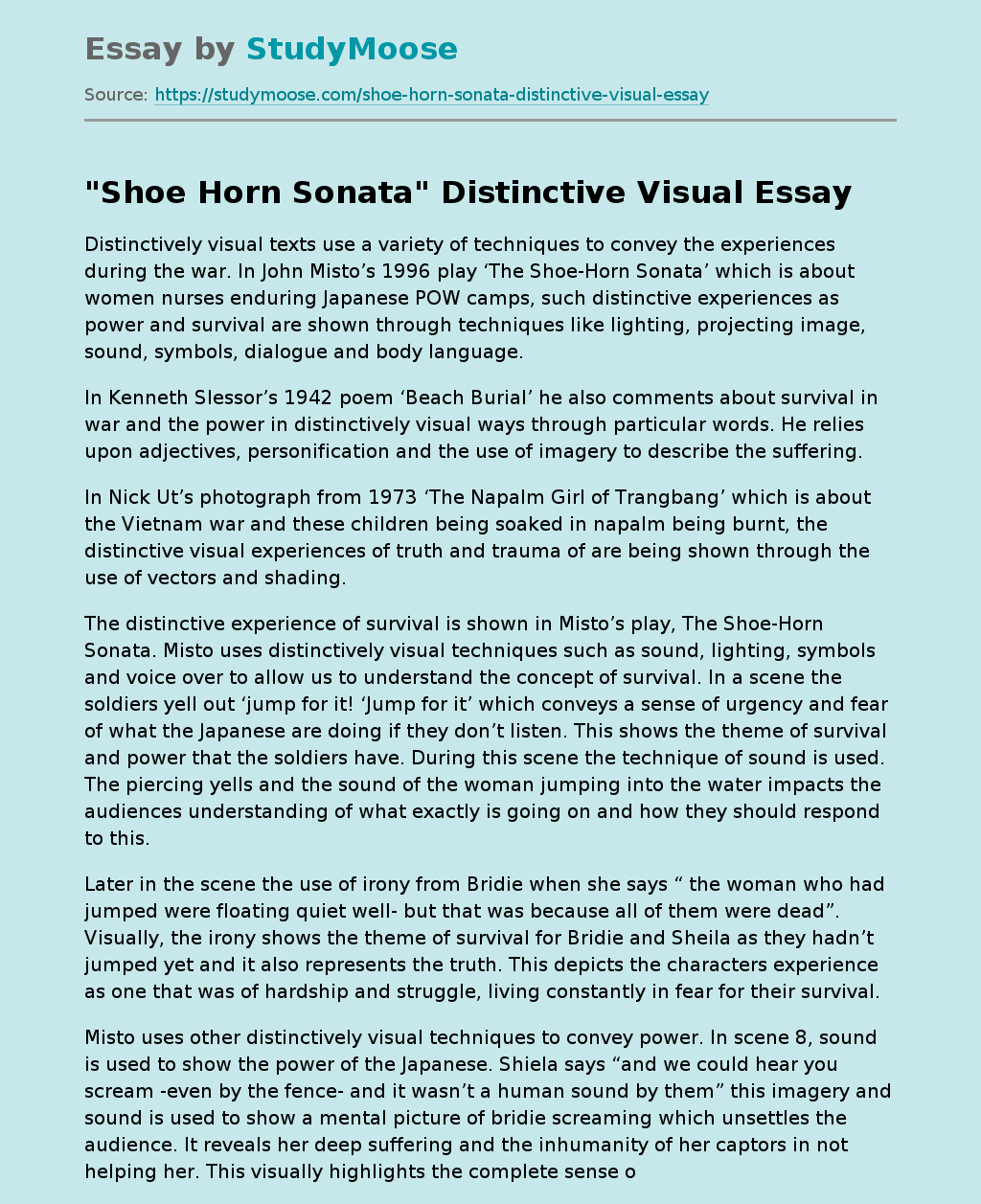