There are many religions in the world. Some are more well-known than others. One of the lesser known Asian religions is the Japanese religion, Shinto. Unless a person travels to Japan or can interact with someone who is willing to share a little about his or her religion, no one will know anything about it. Shinto is ancient native religion of Japan still practiced in a form modified by the influence of Buddhism and Confucianism (Infoplease.com, 2014). According to Molloy (2013), “Shinto has no known person or group as its founder.

Don't use plagiarized sources. Get your custom essay on
“ Shinto Illustration ”
Get custom paper
NEW! smart matching with writer

In fact, its mysterious origins date back to the ancient people of Japan and their stories of how the world came into being.” Its followers of this religion rarely know the name of the deity they are worshiping, nor do they care to, because their concern lies in whether they can feel its existence. Many aspects contribute to Shintoism in its entirety including nature, the kami, shrines, ceremonies, purification, and festivals.

It wasn’t until the invasion of Buddhism into Japan that forces the people to give the religion its name. The main aspects of the practice of Shinto are affinity with natural beauty, harmony with spirits, and purification rituals. The people believe in the divine to be all around them because the beauty and power of nature surrounded them. However, Shinto is more than a nature religion; it also has ethnic and family dimensions. The people of Japan also worship the spirits of their departed ancestors or great leaders of the past.

As it has already mentioned; the entry of Buddhism into Japan in the sixth century AD force Shinto to define itself. It then became a complicated process because Shinto belief is so similar to that of the Mahayana Buddhism. Even with the influence of Buddhism and Confucianism, Shinto did not die out.

In fact, it took a man name Mutsuhito to step up to the plate and take over the reign of Emperor to get things moving and reinstate the Shinto religion to its fullest capacity. Shinto even became a national religion, where shrines received national status and priest became official government employees. Unfortunately, it did not stay that way. Japan’s defeat in World War II brought the disentanglement of the State Shinto; the Emperor destroyed its chief foundation as well as denouncing his divinity. Shinto shrines were returned to private religious practice, and all religions were equal footing. Theoretically, Shinto became strictly private religion but in reality it retains a special place in national life (Molloy, 2013).

In its present form; Shinto is characterized less by religious doctrine or belief than by the observance of popular festivals, traditional ceremonies, and customs, many involving pilgrimages to shrines. Currently, there is no dogmatic and no formulated code of morals (Infoplease.com, 2014). However, Shinto practice is usually wherever large Japanese communities exist. The common religious practice that still exists today are worship at Shrines, Celebration of the New Year, Observance of the seasons and nature, and other Shinto practices such as daily worships in an individual’s home.

Retrieved from The University of Phoenix eBook Collection. 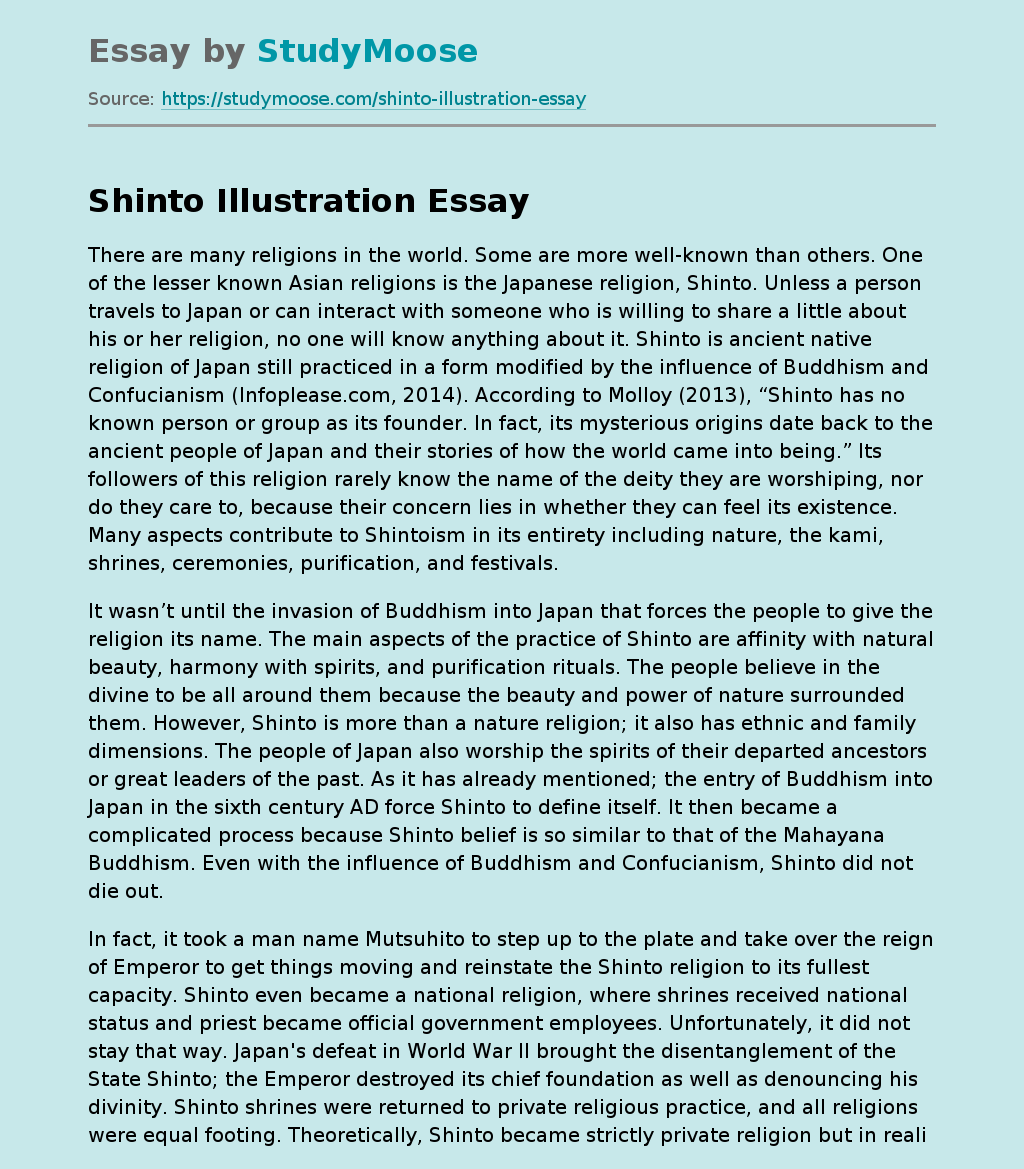