On a side note, Holmes have been associated with several different daignosis where the most notable would be that he is on the austism spectrum, more specifically Asperger’s Syndrome. (Rayne 2018, 1) The reason why many scholars and fanatics alike diagnose him as being a suffer of Asperger’s is his attention to the smallest detail and his tendency to be absorbed in his own interests (Rayne 2018, 1) which are symptoms of Asperger’s. Furthermore, when it comes to recollecting Holmes quite literally recollects everything down to the smallest detail and this is often done visually.

On this point, Temple Grandin, who is a suffer of autism, states that ‘when you think in pictures that are like video tapes.’ (Grandin 2000, 14) There are other disorders Holmes fanatics claim Holmes may have, for instance, he may suffer from Bipolar Disorder or some even claiming he has Savant Syndrome. Many would argue Holmes case of being bipolar is minor and that his episodes are more depressive than manic.

(Rayne 2018, 1) Finally, there is Servant Syndrome which is categorised by the individual being better at remembering dates than the rest of the population. On an absolute final note and as will be mentioned later he diagnoses him with Antisocial Personality Disorder or formerly known as sociopathy. At the time, Doyle wrote his novels people were not aware of this laundry list of disorders, so they simply wrote it off as being an oddity. And given the fact that Holmes was part of the gentry there would have been a greater chance of people writing such of as simply being eccentricities.

Another thing that contributes quite a bit to their dynamic partnership is their similarities. Despite their differences, they are remarkably similar. For instance, they are both excitable and adventuress. The best example of Watson’s hunger for adventure emerges when he first hears of Holmes’ profession and cannot wait to assist Holmes. The only way to describe Watson’s excitement when hearing this news is that of a child on Christmas Eve waiting to get his/her presence. Equally important is his former career as an army doctor which has taken him far and wide, plus it means that he has seen his fair share of death and destruction. In A Study in Scarlet, he even remarks ‘I object to rows because my nerves are shaken·’ (Doyle. A Study in Scarlet: 26) Giving his time in Iraq, he is not afraid of violence, which is especially prevalent when Stamford tells him that Holmes is in the middle of ‘beating the subjects in the dissecting-rooms with a stick·’ (Doyle. A Study in Scarlet, 19) When hearing of the brutal manner in which Holmes treats his evidence may lead the reader to entertain more sadistic, even morbid notions. Some may even go as far as to speculate that this mystery of man gets pleasure from torturing corpses. Readers also see Doyle’s fascination with the odd creature that is humans. By pointing this oddity out within Holmes’ puzzling character, he found that this may be the key to Holmes’ appeal. Holmes’ appeal lays in the fact that he is not like any common man one can bump into on the street. Sticking to the theme of violence, when Watson experience Holmes’ violent outburst on a corpse, he does not seem faced quite the contrary. He seems fascinated by Holmes’ barbaric behaviour. As said once before, the former army doctor does not seem to affect when witnessing violence, but one thing there is interesting to note is that Watson sleeps with a service revolver which Watson takes out if need be. In continuation of this, Holmes’ brother Mycroft’s observation of Watson’s left hand when the veteran is under pressure he mentioned: ‘The war, Dr Watson do not haunt you· You miss it.’ (McGuigan 2010: 38:45) So, according to Steven Moffat and Mark Gatiss’ interpretation of Watson, he is not a plagued by Post Traumatic Strees Disorder (PTSD) but rather an individual who misses the threat of danger thus feels right at home assisting Holmes’ on his cases. On the contrary, Holmes has applied his supreme intellect and knack for solving crime in order to deal with individuals of a particular nature and sticky situations. 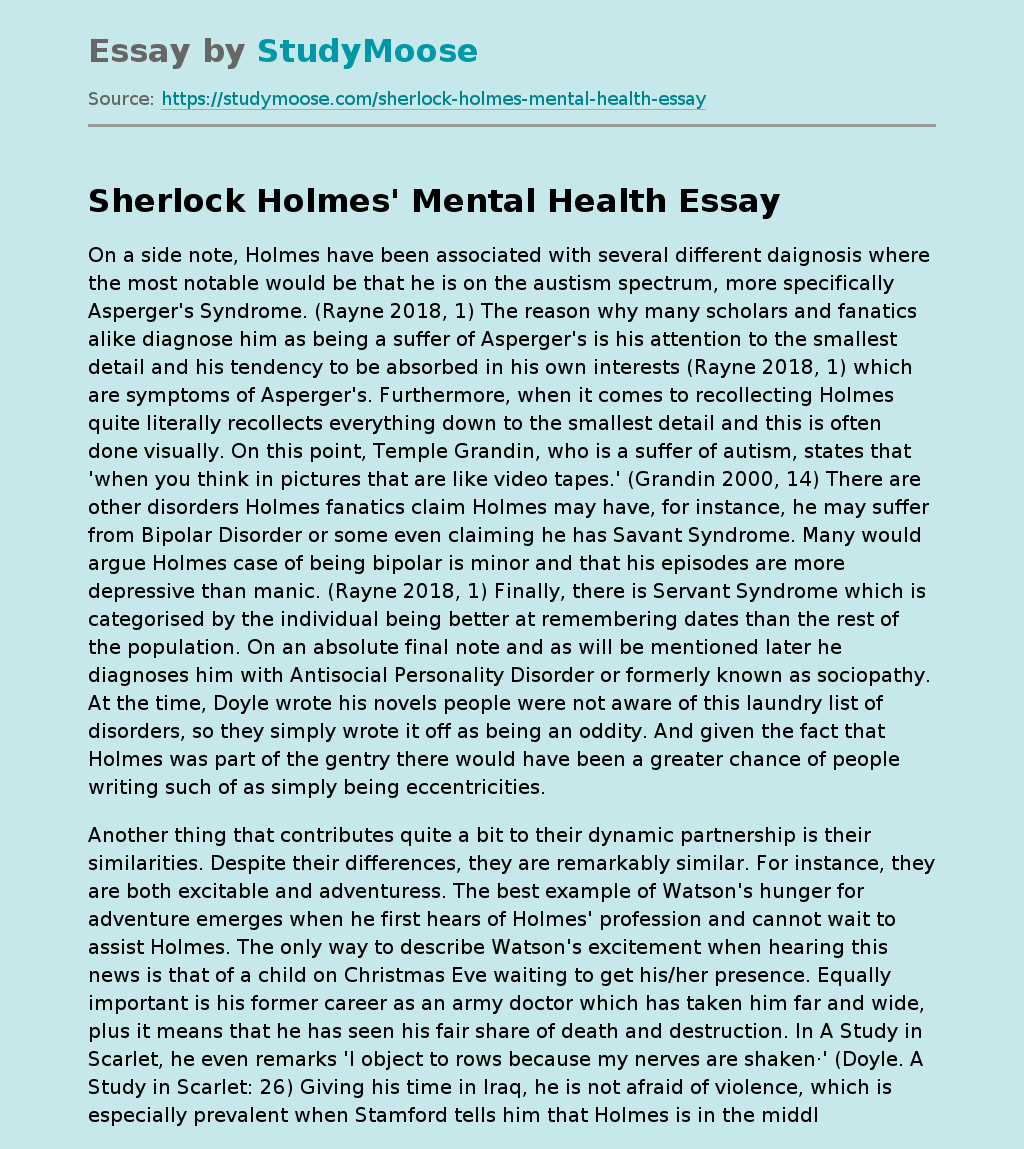