You get the impression that if Helen Stoner was mugged she wouldn’t know what to do but Anne probably would give as good as she got. On the other hand Holmes knows more about selected things that he finds useful for the sort of cases he takes on like chemistry, anatomy and he seems also to be adept in psychology as well because he always seems to know what the criminal in all of his stories is thinking and he can anticipate their every move.

Don't use plagiarized sources. Get your custom essay on
“ Sherlock Holmes comparison ”
Get custom paper
NEW! smart matching with writer

Phillip Marlowe seems to just find out about the case as he is going along and at the end of the story he is tricked by Ikky anyway.

That wouldn’t happen to Holmes as I think that Sir Arthur Conan Doyle tried to portray Holmes as a kind of 19th century Super Man and I doubt that Holmes is ever double crossed in any of his stories. Holmes appears to be quite a well off person as he lives in a nice flat/apartment in the centre of London and he has a maid.

He seems to be quite a clever well-educated person. One clever way of making Holmes look good that the author uses is putting Holmes with somebody who is supposed to be a doctor and obviously quite a clever person.

Holmes makes doctor Watson look very incompetent in comparison to himself. Although Marlowe is very streetwise and is able to look after himself the author doesn’t portray him as a particularly bright spark.

Holmes seems to be well off enough to pick and choose which cases he picks up and only ever picks up the ones which he finds interesting whereas Marlowe isn’t well off and he has to take any cases that come his way. If Marlowe had been better off money wise, you get the impression that he wouldn’t have taken on Ikkys case because from the start he obviously didn’t like him.

Back when ‘the Speckled Band ‘ was written there probably weren’t phones because if there had been Helen Stoner probably would have just rung Sherlock instead of travelling all the way to see him. Holmes seems to really care about the people involved in his cases whereas you get the impression that Marlowe doesn’t care if Ikky lives or dies as long as he gets his money. Marlowe works in a crummy office in a crummy part of town. In the story, it mentions that there are a lot of private detectives in the city and this just proves that the city is very rough.

You could imagine that if he had enough money Marlowe would leave the city. In ‘Wrong Pigion’ sarcasm is used quite a lot for example Anne Riordan says ‘oh sure I meet killers every day, I invite them in for Whiskey sours and caviar on hot toast’ Sarcasm isn’t used in Sherlock Holmes very much because its not really part of his character, also in those days I think that the phrase they would have used is ‘sarcasm is the lowest form of wit and Holmes is quite a witty character so Arthur Conan Doyle wouldn’t want to make Holmes look bad.

Holmes is either a very conceited character or very realistic about his abilities. Neither Holmes nor Marlowe seems to get on very well with the police. Both seem to try as hard as they can to avoid them. You get the impression that Holmes thinks they are a load of duffers. When I think of Marlowe and his relationship with the police what springs to mind is that possibly in the past he may have done something or been arrested for a crime he hasn’t committed because he doesn’t seem to trust them very much.

The fact that he has a friend in the force may help him to get insider information and good hints for some of his cases. In my opinion, there aren’t really any links between the two stories. There is completely different historical backgrounds, the characters are completely different and lets face it one story is about a crime ridden city in America and the other is a clever story set in England with a good twist in the end. I think that ‘The Spackled Band ‘ was better. 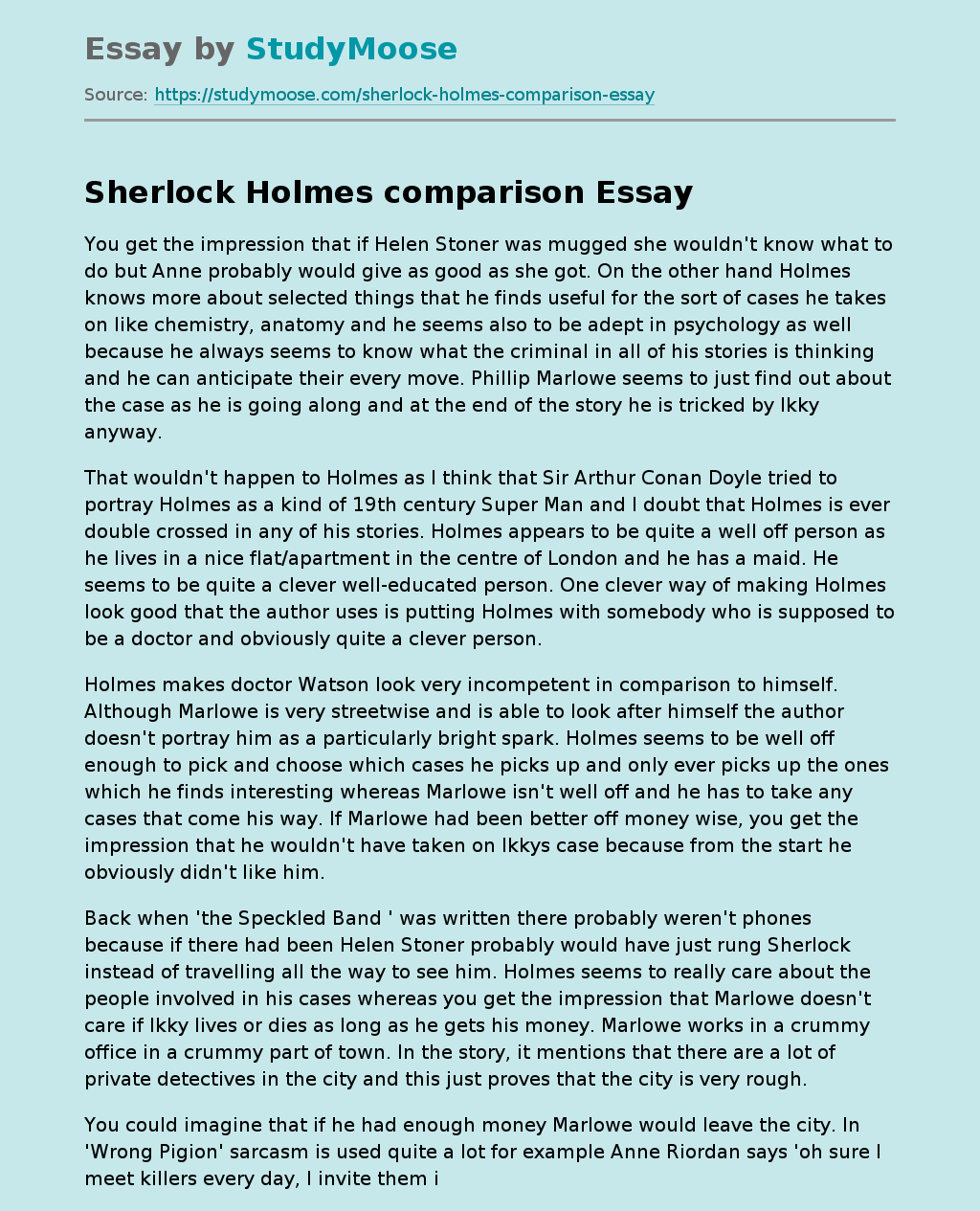