Music has always been the world’s universal form of communication. The Recording Industry Association of America implies that “it touches every person of every culture on the globe to the tune of $40 billion annually, and the U.S. recording industry accounts for fully one-third of that market” (RIAA). As technology rapidly increases, file sharing amongst consumers becomes faster and easier to do. The new phenomenon of the MPEG Layer 3 encoding (MP3) and the peer-to-peer (P2P) networks present a challenge to the traditional recording and distribution methods of music.

MP3 is the fastest growing file format on the internet because it has the ability to convert songs from a CD into a smaller size that can be easily transmitted over the internet. The revolutionary beginning of Napster, a program that uses a P2P network and allows consumers to share MP3 files amongst each other for free, has caused many outrageous issues.

The main controversy involved with MP3 files is that they are being traded around the internet without the consent of the artist or record companies (Boycott-RIAA).

In other words, file sharing is considered to be in violation with copyrights. Copyright is the protection of the original expression of an idea and provides a financial backup for those individuals to share ideas and inventions to protect his or her work. Artists that own their own music and copyright already have a number of rights under current federal law that includes “the right to control their production, distribution and adaptation of their work, as well as the public performance or display of their work” (RIAA).

Most artists are for the copyright law because they would like to protect their music since they have put much effort and time in making it.

For example, heavy metal rock band Metallica and rapper Dr. Dre were the first in a long line of people to sue Napster for sharing their music without their approval. Overall, the music industry believes that the artists and record companies have and deserve the right to protect their own music. Another controversial situation has to do with the significant drop of CD sales. Since 1999, sales dropped about 26%, which is equivalent of nearly $4.3 billion (RIAA). This tremendous decrease has caused many record stores to shut down and have caused some people to lose their jobs.

Although the development of MP3 file sharing has caused a few problems, the distribution has also created many advantages. Have you ever bought a CD and realized that it was not worth the amount of money you paid for it because there were only one or two songs that you liked on it? Well, with the use of MP3 file sharing you can listen to the tracks of a CD and have a chance to make an educated choice on whether or not to buy the CD. With the arrival of MP3’s people are now able to take their favorite tracks from CD’s and burn them all into one. Also, before you were only able to fit 10-16 songs on a CD, now you can fit as many as 130+ songs on a normal CD when converting the tracks to MP3 format. In addition, MP3 file sharing has given many artists free advertising. Many talented people struggle everyday to become famous by way of their music.

It is a hard business and any publicity is good. There are a lot of artists out there who never would have been heard of if it were not for file sharing networks. Also, many consumers do not want to idolize singers and songwriters that support filing lawsuits against them. In the end, the industry’s attempt to earn more money by banning the sharing of music backfired because the loyal fans did not want to spend money to support these artists who care more about the money than the music. Unregulated and used reasonably, MP3 file sharing is truly beneficial to the music industry (Boycott-RIAA).

Downloading and sharing music off of the internet should not only be legal, but supported by the music industry. If file sharing is considered a violation of the copyright law, then why should it be legal? By looking at statistics from a chart provided by the RIAA, it is easy to suggest that the music industry is not losing but rather making more and more profit as the years go by. In 1997, the year-end market report indicates that the overall dollar value for the record industry was 12.23 billion dollars. In just three years, at the end of 2000, the dollar value for the record industry was a whopping 14.32 billion (RIAA). My point is that if the artists and record companies realize that they are making money instead of losing it, then they would give these file sharing networks the right to use their music. Well why have CD sales dropped tremendously? Although the result of CD sale decrease is from file sharing, the cause is mainly because CD’s are too expensive. Many teenagers do not have a monthly income to buy albums with the one or two songs they want. Some feel that buying the whole album is not worth the money as the prices have increased over the past few years. Increased album prices only encourage file sharers to share more music more often then before and that is what affects record sales.

The loss of sales is also due to the fact that the industry stopped producing music singles. What should be done to end this controversy? It is clear that the music industry is facing their most terrifying stumbling stone yet (Boycott-RIAA). However, it is up to them on whether they choose to use this as a stumbling stone, or as a stepping stone to greater business growth and profit potential. The answer is not trying to shut down all the opponent networks. The answer lies in creating a better product, a more attractive option to the consumer. Ultimately it comes down to persuading a consumer to want to pay money for a service or product, putting their necks on the chopping block is not going to do it.

The answer is in making consumers feel as though they are valued and not treated like criminals. Both sides will lose if artists and companies stop producing music and consumers stop buying it. Producers must ask themselves, is there such a thing as an acceptable loss? How can I decrease the amount loss, without making the consumers hate me for doing so? The people who will pay money for music, be it online or in a record store, do so because they are fans of artists or bands. There is a desire in the consumer already, creative producers need to fulfill that desire, and exceed its expectations and that will make consumers come.

When Napster was shut down in 2001, it had about twenty million users. Today, there are an excess of ten times that many people using similar programs all over the world. With each year coming out with better and new technology, more and more legislation is brought upon to control the outbreak of technology. But it seems as though these legislations are not keeping problems off the internet. The lack of regulations on the internet and the rise of more computer literate people have caused legislation to be on a lower level than the technology level. Also, with so many active participants downloading music, there will always be another way to find free music. No matter how many programs have lawsuits filed against them and are forced to shut down; another one will take its place. In the words of the found of Napster, Shawn Fanning claims that, “even if they succeed in
shutting down those particular services, new services will spring up. It’s the nature of the internet” (Wingfield). 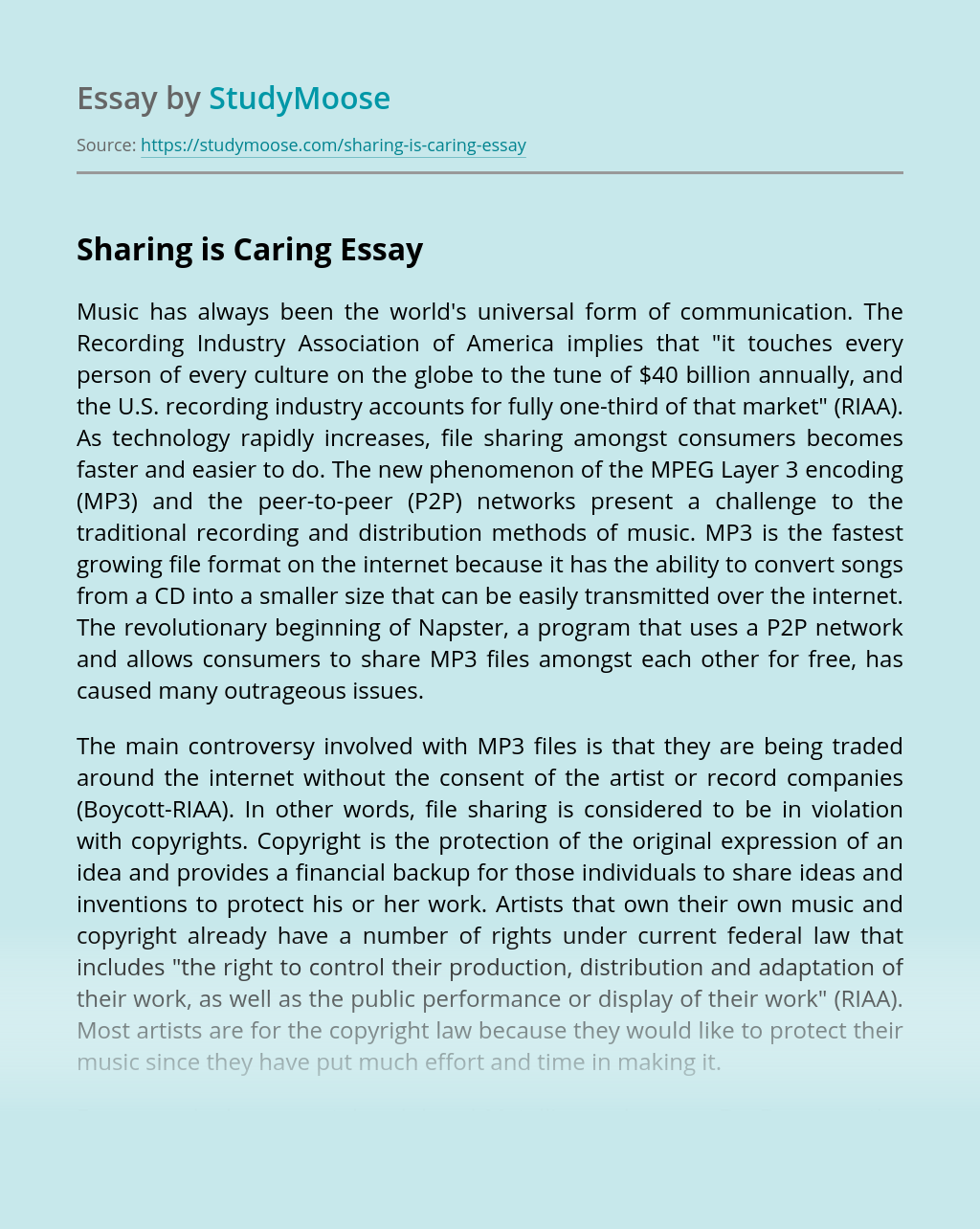