Shakespeare's The Tragedy of Hamlet, Prince of Denmark

This paper is a brief overview scene by scene of the play Hamlet by Shakespeare with characters and quotes.

Shakespeare’s The Tragedy of Hamlet, Prince of Denmark I. a) Time: Sixteenth Century b) Place: Denmark c) Preliminary situation: King Hamlet, King of Denmark is killed. Hamlet the Prince’s uncle, Claudius, receives the throne and marries Queen Gertrude. II. a) Initial Incident: A ghost appears to Marcellus and another guard who decide to inform Hamlet of it’s presence. b) Rising Action: 1.

Don't use plagiarized sources. Get your custom essay on
“ Shakespeare’s The Tragedy of Hamlet, Prince of Denmark ”
Get custom paper
NEW! smart matching with writer

2 Claudius, the new King, is holding court and thanks his subjects for their support. He then sends an ambassador to Norway to protect from an invasion from Fortinbras, Hamlets second cousin. He gives Laertes permission to return to France but will not allow Hamlet to go to Wittenburg. Hamlet feels alone and is upset that his mother married so shortly after her husband’s death. The guards arrive and tell Hamlet about the ghost and Hamlet agrees to join them that night in search of the ghost, his father.

1.3 At Polonius’s room, Laertes says good-bye to his sister Ophelia and tells her not to trust Hamlet. Polonius arrives and says good-bye Laertes and offers him advice. He then talks to Ophelia about not seeing Hamlet and then orders her stay away from him. 1.4 Claudius is drinking the night and Hamlet, Horatio, and Marcellus see the ghost again. The ghost signals to Hamlet to come, but the others try and hold him back. Hamlet struggles free and moves towards the apparition.

1.5 The ghost tells Hamlet that he is the spirit of his father and that he was not poisoned, but murdered. He demands that Hamlet avenge his death by murdering the killer, King Claudius. Hamlet promises to get revenge and orders the other to swear they haven’t seen anything with the help of the ghost. 2.1 Polonius sends his servant, Reynaldo, to Paris to spy and ask about Laertes. Ophelia then enters the room and tells her father that Hamlet was visiting and was completely mad. Polonius believes that Hamlet has gone crazy due to the rejection from Ophelia and rushes off to inform the king. 2.2 King and Queen send Rosencrantz and Guildenstern, old school buddies, to spy on Hamlet and determine why he has gone crazy. Polonius tells everyone that Hamlet is crazy because of unreturned love. Claudius isn’t quite convinced that Hamlet really is crazy but agrees to help Polonius spy on him. Hamlet, when confronted by Rosencrantz and Guildenstern, pretends to be mad so no one will find out about the ghost and what Hamlet knows. Then, a group of touring actors enters the scene and Hamlet makes one of them recite a speech he likes. When finished, Hamlet realizes that the actor read the speech with more emotion than Hamlet had for avenging his fathers death. Hamlet then convinces the actors to put on a play similar to his father’s death so he could tell by Claudius’s reaction whether he was guilty or not. 3.1 Rosencrantz and Guildenstern return and tell Polonius and Claudius that they couldn’t find a reason for Hamlets madness. Polonius then decides to place Ophelia where he and Claudius can listen in on their conversation, hers and Hamlets. Hamlet is nice to her at first, but when he suspects someone is listening, he becomes abusive and cruel to her. Claudius, who is no fool, realizes that Hamlet is not crazy because of Ophelia, so decides to send Hamlet away to England because he is starting to fear his own life. Polonius persuades Claudius not to send Hamlet away until after he has talked with Gertrude. 3.2 Hamlet and Horatio watch as the actors do the play. Hamlet is mean again to Ophelia, but all is sudden when Claudius gets upset and cancels the play. It’s at this point that Hamlet knows that Claudius did in fact murder King Hamlet. Hamlet is convinced later by Guildenstern and Rosencrantz to talk with Gertrude. c) Climax: Hamlet kills Polonius instead of Claudius, and once you kill someone, you can’t turn back. d) Falling Action: 3.4 After killing Polonius, Hamlet verbally attacks his mother for marrying so shortly after her husbands death. Gertrude starts to believe that Hamlet isn’t mad, when the ghost comes back in the room, and only Hamlet can see it. Gertrude then decides again that he is crazy. Hamlet leaves with Polonius’ body and begs his mother to leave Claudius. 4.1 Gertrude tells Claudius that Hamlet murdered Polonius. Claudius then sends Rosencrantz and Guildenstern to find Hamlet and the body. 4.2 Hamlet doesn’t tell them where the body is. 4.3 Hamlet is brought to Claudius and is told to leave for England. Claudius tells the audience he is sending Hamlet to his death. 4.4 On his journey, Hamlet crosses Fortinbras on their way to Poland. Hamlets finds a model for avenging his father’s death in Fortinbras. 4.5 Ophelia enters the Queens room singing about death and flowers. Laertes returns in anger and wants to kill Claudius for all this done to his family. Claudius assures him that he had nothing to do with it, and that it was all Hamlet. 4.6 Hamlet sends Horatio a letter telling him about his return to Denmark. 4.7 Another letter is received from Hamlet, this time by Claudius. Claudius persuades Laertes to help him murder Hamlet. They decide to do it by stabbing him with a poisoned sword. Gertrude enters and informs them that Ophelia has drowned. 5.1 Hamlet is in the graveyard with Horatio. Hamlet has a soliloquy about who’s grave this is. The funeral procession arrives and he learns of Ophelia’s death. Him and Laertes begin to brawl, but it is broken up quickly. 5.2 Hamlet has agreed to a fencing match between he and Laertes. They begin to fight and then Laertes stabs Hamlet with the poisoned sword. They fight some more and the swords fall. They pick up the wrong ones and Laertes gets stab with the poisoned sword. Gertrude accidentally drinks the poisoned wine and dies, and a dying Laertes tells everyone about how Claudius had planned this whole wicked event. Hamlet kills Claudius and tells Horatio all the details. Hamlet then dies as well. e) Conclusion: Before his death, Hamlet names Fortinbras heir to the Danish throne. Fortinbras claims the throne and orders Hamlet a military funeral. III. Characters: Hamlet: A devastated young man who find the power to avenge his father’s death. Claudius: An extremely sinister person who murders his brother the king and causes the deaths of many good innocent people. Gertrude: A helpless bystander who is ruined by Claudius and Hamlet’s vengeance. IV. Theme: Revenge, which can consume a person’s thinking, is a useless emotion. V. Personal Response: I enjoyed this play very much. The first time through reading it didn’t appeal to me as much but after seeing 2 movie versions and discussing it in depth it has really grabbed me. It also makes me look at revenge as a more evil thing than I did before. Revenge is a silly game and I’m better of not playing it. VI. Quotations: “Why, the, ’tis none to you, for there is nothing good or bad but thinking makes it so. To me, it is a prison” (Hamlet: 2.2 268-270) “Let me not think on’t; frailty, they name is woman!” (Hamlet: 1.2 150) “This above all: to thine own self be true…” (Polonius: 1.3 84)

Shakespeare's The Tragedy of Hamlet, Prince of Denmark. (2020, Jun 02). Retrieved from http://studymoose.com/shakespeares-the-tragedy-of-hamlet-prince-of-denmark-new-essay 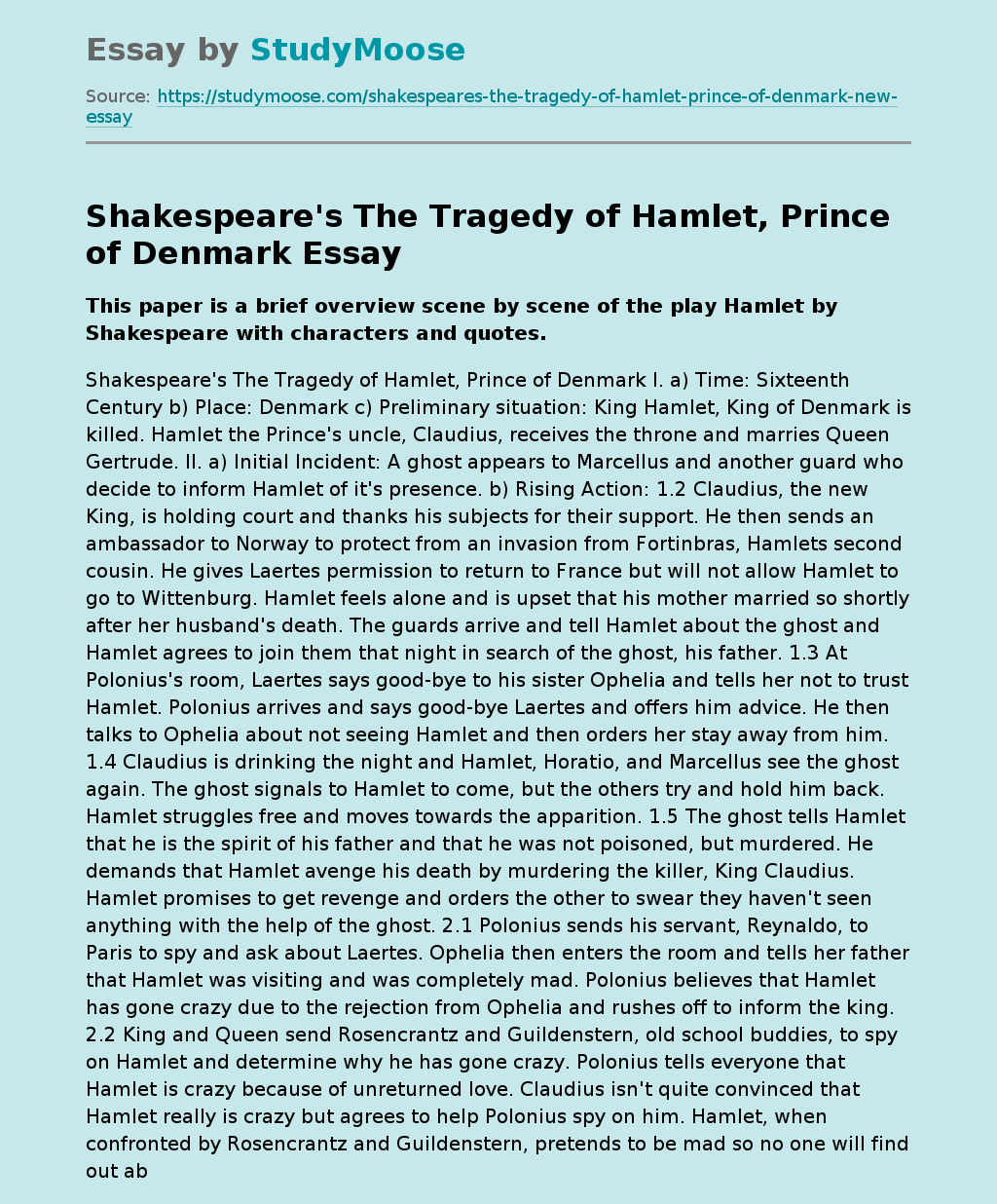