How does Shakespeare present the Macbeth's before the murder of Duncan and how far has this changed by the end of the play?

Shakespeare presents and develops the Macbeths in a number of ways. He uses many techniques; he includes language, soliloquies, scenery and the speech of others. He uses stagecraft to present and develop but he also uses his stagecraft to ensure the audience knows what is going on. He does not simply develop the Macbeths in one simple way but he slowly changes them over the play, until the character’s real identity finally emerges. The first scene has three witches conjuring some sort of spell.

Don't use plagiarized sources. Get your custom essay on
“ How does Shakespeare present the Macbeth’s before the murder of Duncan and how far has this changed by the end of the play? ”
Get custom paper
NEW! smart matching with writer

The setting is thunder and lightning.

This dramatic opening suggests something bad is about to happen. When they are talking to each other they say “There to meet with Macbeth”, this suggest to us that they are either planning on doing something against Macbeth or that Macbeth is working with the witches. This creates our first tentative views of Macbeth as either victim or villain. In the following scene king Duncan is faced with a bleeding captain.

Duncan is speaking with the leaders of his army, they begin to speak of Macbeth, “For brave Macbeth – well he deserves that title…

His first words are “so foul and far a day, I have not seen”.

These have a strong affect on our views and opinions on Macbeth. This brings suspicion in Macbeth because his first words are similar to the words of the witches in the first scene, because of his words being so similar, it makes him further associated with the witches and makes us think he is a part of their evil, or that he may be capable of the same evil himself. Macbeth and Banquo then come across the witches. The witches say “Hail to Macbeth… Thane of Glamis… Thane of Cawdor… That shalt be king hereafter! Macbeth is stunned and speechless, he knows that he is already Thane of Glamis and believes that the other titles are impossible for him to get. This confuses him and he is a very suspicious sate of mind. He really wants to know more. When he is at his castle he is questioning himself about the titles and whether he deserves them or not, he does not want to tell anyone about what had happened. His wife is able to read him like a book, she knows what has happened and tries to convince him to kill the King, so that he can become the King.

She continuously tries her best to persuade Macbeth to kill the King, she is slightly worried that he may not be able to kill the King, “yet do I fear thy nature, it is too full of o’ th’ milk of human kindness”. This shows that she thinks Macbeth might drop out and forget about the murder, but she continues persuading. “That I may pour my spirits in thy ear, and chastise with the valour of my tongue all that impedes thee from the golden round”. Here she is saying that she wants to pour some of her own evil spirit into him, and whip anything with the boldness of her tongue that prevents Macbeth from the crown.

All the way up until the murder Lady Macbeth continues to poison Macbeth and tells him that he has to do it, “look like th ‘innocent flower, but be the serpent under’t. This shows how much of an evil snake lady Macbeth is and what she is capable of. After Macbeth kills the King he runs down and washes his hands, as he washes his hands he says how the blood can never be washed off his hands “Will all great Neptune’s ocean wash this blood clean from my hand?

No”, this just shows that he is very regretful and he knows that what he has done is wrong. He also says that he can never get rid of the smell of blood “Here’s the smell of blood still. All the perfumes of Arabia will not sweeten this little hand”. This again shows his regret and that he knows he will one day be found out and that he cannot hide it forever. But Lady Macbeth remains confident and says “A little water clears us of this deed. How easy is it then! “. After this he is always jumpy and scared, he does not know what to do.

Lady Macbeth is not at all scared and is trying to give Macbeth some confidence. Later he becomes more confident and puts everything behind him. But then he remembers that Banquo’s sons where also said to be kings, so he decides to kill Banquo to ensure he stays King. He is more confident with this murder becomes he’s already done one murder so another one won’t hurt. After Banquo’s murder he goes back to being a nervous wreck, he sees illusions of Banquo, he knows that he did not kill Banquo’s son so he has to be very cautious.

Later his wife, Lady Macbeth, becomes scared and she loses all of her confidence, she start to sleep-walk to wash off blood from her hands. She is going mad and eventually she commits suicide. Macbeth becomes a bit too confident and believes he is invincible due to the talk of the witches, he then decides not to kill Macduff and his ‘invincibility’ is over-ruled and he is killed by King Macduff. Throughout the entire play, the Macbeths state of minds change a lot. I think that Macbeth’s state of mind changes more than that of Lady Macbeth.

He begins as a brave warrior and then deteriorates after the murder, he later becomes regretful and realises that the witches tricked him. But it was too late and Macduff was on his way to kill him, so if he was destined to go down, he was going to go down fighting. Lady Macbeth only experiences one major change throughout the play, she is very cunning and evil, her state of mind only changes long after the murder where she deteriorates more than Macbeth and this eventually leads to suicide.

How does Shakespeare present the Macbeth's before the murder of Duncan and how far has this changed by the end of the play?. (2020, Jun 02). Retrieved from http://studymoose.com/shakespeare-present-macbeths-murder-duncan-far-changed-end-play-new-essay 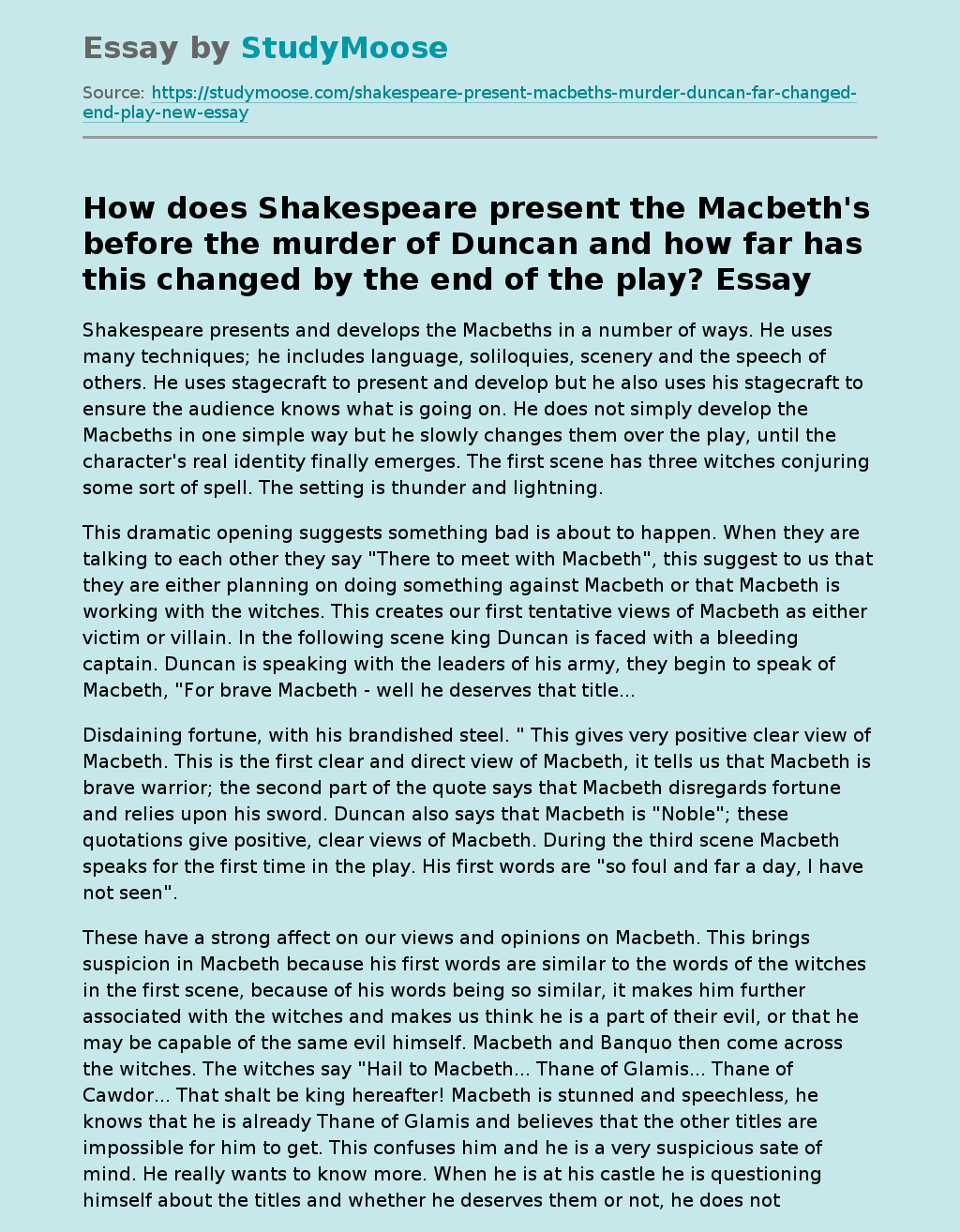