How does Shakespeare interest his audience with both the moral debate and the action on stage in Measure for Measure?

In his play Measure for Measure, Shakespeare chooses to explore many moral issues such as human weakness, sexual temptation and above all justice against mercy. However these moral debates are intrinsically linked to the action on stage portrayed by Shakespeare’s characters. Therefore to say ‘both’ is not appropriate or relevant to the question. The word debate suggests a ‘prolonged discussion’ which may lead an audience to associate Measure for Measure with dull trials and legal language something that may not of been of huge interest to Shakespeare’s contemporary working class audience.

Don't use plagiarized sources. Get your custom essay on
“ How does Shakespeare interest his audience with both the moral debate and the action on stage in Measure for Measure? ”
Get custom paper
NEW! smart matching with writer

Yet Shakespeare is able to capture all the previously mentioned debates vibrantly and dramatically through the characters of Angelo and Isabella. The conflict between these two absolute values, the ‘precise’ and ‘snow-broth’ Angelo against the restrained novice Isabella open the debates not just of justice and mercy but also of the male-female relationships of Jacobean England.

The contrast of Isabella’s enlightened, elegant speeches on mercy “The marshals truncheon, nor the judges robe become them with one half so good a grace as mercy does” against Angel’s dry, blunt and inflexible responses “He’s sentenced tis too late” highlight the inhumanity of the justice system and the Christian virtue of mercy.

Isabella’s speech notably resembles “the Quality of mercy” speech from The Merchant of Venice, one of Shakespeare’s most famous speeches. One can conclude that perhaps that Shakespeare was questioning the judicial system and the application of justice in his life.

By exploring this through this powerful exchange of wills Shakespeare would certainly have created a dramatic theatrical impact while perhaps leading an audience to question the implementation of the law.

Shakespeare also engages his audience through the exploration of gender politics through these two characters. Isabella in her attempts to save her brothers life is offered a cruel ultimatum by Angelo “You must lay down the treasures of your body, to this supposed or else let him suffer” She is to either allow her brother to die or sacrifice the only thing of worth for many Jacobean women, her chastity.

Angelo’s assurance of “Who will believe you Isabel/My unsoiled name…. will so your accusation outweigh” show the powerless position of women in Jacobean society. Therefore we see justice as being something not only corrupt but also a place where men can “in their creation mar” by abusing their power and male authority to exploit women to their own ends. Shakespeare deviated from his source material of Cinthio’s novella and Whetstone’s play by choosing to make the character of Isabella a catholic nun.

The purpose of this is ambiguous as in post-reformation England Catholics were regarded with suspicion and mistrust (the results of this were later shown through the attempt to blow up James I and parliament) Therefore by making Isabella a nun it is unlikely that Shakespeare would have gained a great deal of sympathy for his character and her plight. However to a modern and a feminist audience this would serve in exposing Isabella’s vulnerability when faced with Angelo’s patriarchal authority.

Her character is also made much more engaging for a modern female audience as we realize she is not merely maid , widow nor wife’ but a woman who is able to take control of her own body and decisions that ultimately make her very relatable to this audience. Yet throughout the second half of the play after Act II scene iv, the exploration of moral issues becomes secondary to the restoration of order and the drawing to a neat conclusion.

This is shown principally through the mechanisms of the ‘old fantastical Duke of dark corners’ in his attempts to fix the problems his deputy has created. Subsequent dramatic devices such as the ‘bed trick’ where Isabella’s body is substituted for Marianas and also the replacement of Claudio’s head with that of a conveniently deceased pirate cause the play to become almost farcical. In the context of a Shakespearean comedy it was the formula for the previous disorder and chaos to be miraculously restored.

However when dealing with the serious moral debates, the event after Act II make it very difficult for an audience to take them seriously. Also significant in keeping the audiences interest is the mixture of tragic and comedic aspects this play seems to cover. Characters such as the sly ‘fantastique’ Lucio and the bawdy pimp Pompey deal with plays central themes but in a much lighter hearted manner.

In an exchange with the second deputy Escalus, Pompey questions how far the law can be fully implemented “Does your worship mean to geld and splay all the youth of the city” After been kindly let off with a warning by Escalus, Pompey declares to the audience that he shall follow the deputy’s good counsel “as flesh and fortune shall better determine” and that “the valiant hearts not whipped out of his trade” Though essentially a clown the character of Pompey gives the audience an insightful look into the limitedness of the laws reach.

The humour his character uses enables the audience to engage with him much more so than the cold and ‘precise’ Angelo. Perhaps Shakespeare was sympathetic to the ‘lower peoples’ cause especially when in 1604 the London brothels were pulled down to prevent the spread of the plague. Therefore it can be said that although Pompey serves as the clown of the play, he also gives a voice to those of London’s underworld at the same time satirising how the law cannot ultimately overcome human feeling. Yet the scenes in Act II between Escalus, Elbow and Froth appear to add very little to the debate and seem almost irrelevant choices of characters.

The character of Elbow the constable, acts as a frivolous addition to the cast who creates light hearted comic relief through his use of malapropisms or misspoken words. Moments such as when Elbow confuses ‘benefactors’ with ‘malefactors’ and ‘suspected’ with ‘respected’ offer It would appear that these exchanges were put in place for solely comedic purposes that would perhaps have been highly entertaining to Shakespearean audience. However due to the huge differences in language and humour in twenty-first century England, these jokes are much harder for a modern day audience to react to.

At the end of the play none of the issues that the play initially dealt with seem to have been fully resolved. With the Dukes choric declaration “haste still pays haste and leisure answers leisure. Like doth quit like and Measure still for Measure” an audience would expect a just conclusion to the play and the characters problems perhaps in line with Mathew 7:2 “as you judged others so shall ye be judged” Yet the play does indeed conclude in the style of a typical 1590’s Shakespearean comedy, with multiple marriages.

However it seems that Shakespeare is indeed punishing his characters as all these marriages seem destined to be unhappy both that between Angelo and Mariana and Lucio and the misfortunate prostitute “Marrying a punk, my lord is pressing to death/Whipping and hanging” Therefore we can conclude that Shakespeare was intending to appease his audiences desire to see some form of retribution delivered whether it serves to befit the initial moral debate or not.

How does Shakespeare interest his audience with both the moral debate and the action on stage in Measure for Measure?. (2020, Jun 02). Retrieved from https://studymoose.com/shakespeare-interest-audience-moral-debate-action-stage-measure-measure-new-essay 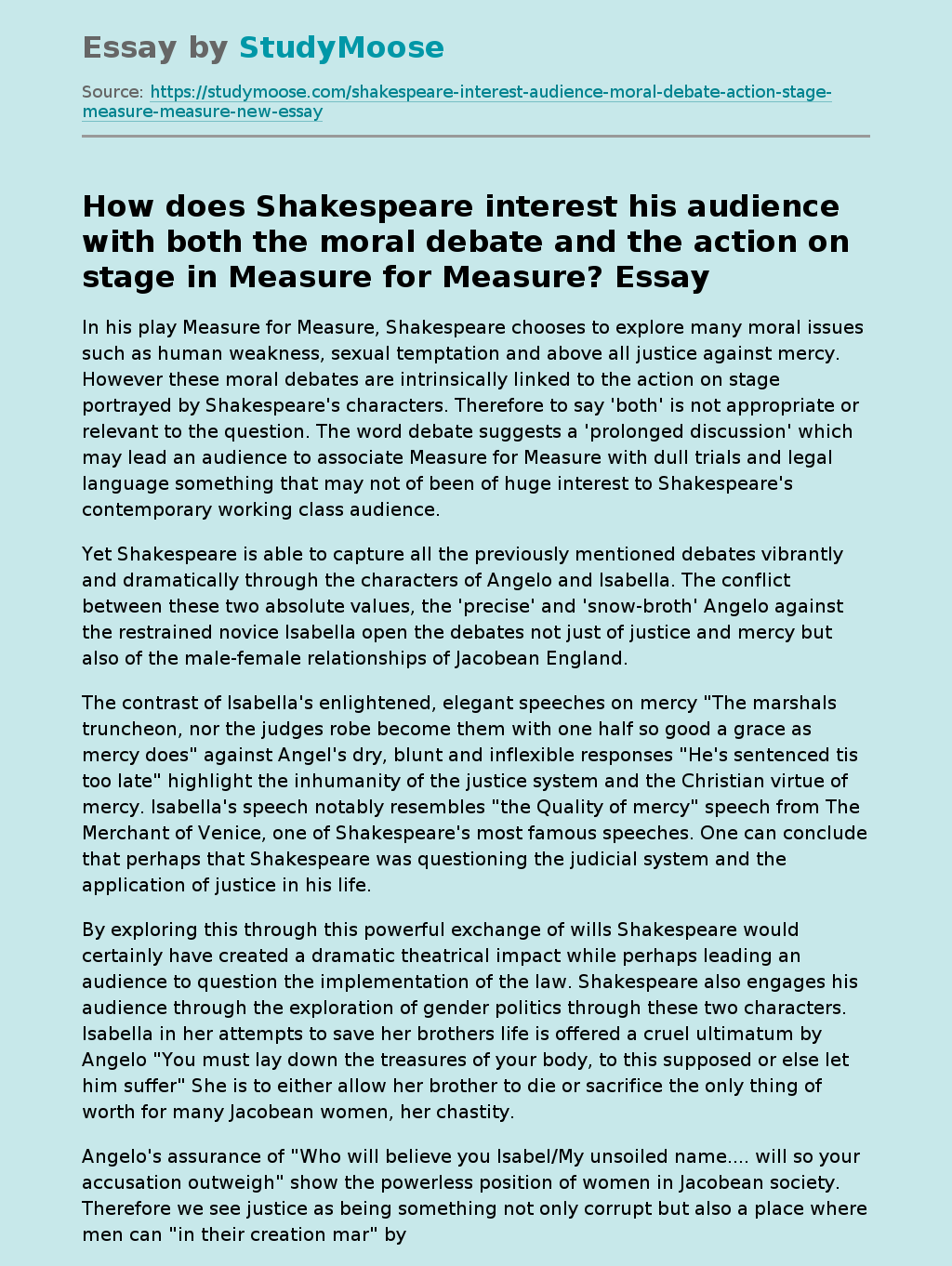