The short story begins with Justine’s antagonistic “Look me here, yu see me? Yu stan up up over deh watchin me,you tink ah don see you?.At this point in the story we do not as yet know why she carries such an antagonistic tone, nor do we as yet know to whom she is directing this antagonism. We are to learn later in the story that she is addressing a character who remains nameless throughout the story; a character who has watched her for a long time from a mango tree, Interestingly enough to be mentioned, a Julie mango tree, a tree whose tasty fruit bears the name of a female.

Don't use plagiarized sources.
Get Your Custom Essay on “Shabine Story” Case Study Just from $13,9/Page

On his annual visits to his grandmother’s home, the protagonist – a young boy – becomes fascinated with a girl in a neighboring yard – Justine, called Shabine. As the “outside child” of a high-colored man, M. Cazaubon, by his black maid, Justine was rejected by her father and turned to prostitution.

The story opens with the narrator explaining that she had a fiery temper, which she unleashed on her tormentors when provoked. The story give us some insight into Justine’s childhood years before her two sons named Gold and Silver were born.

Her two sons, Gold and Silver, were subjected to similar taunts, with Silver reacting in the same way as his mother, while Gold tried to do damage control. About mid-way through the story, the focus moves slightly from Justine and her life, to the life of the, now young man, who has returned to watch her admiringly from the mango tree. There is a fence between them, When he was younger and came to visit his grandmother he would place the paradise plums where she could reach them. she would take the plums and play provocatively with them on her tongue before consuming them. The boy is grown now, and although Justine is slightly older than he is, he still admires her. She ” always fascinated” him, the writer says. The reader then learns that Justine had lived with her mother, who was a maid in Justine’s father’s house. It is implied, by the narrator, that her mother invited white sailors surreptitiously into her house to sleep with Justine. ‘Shabine’ is the story of Justine, a mixed race woman who is constantly mocked for being poor, of mixed heritage, and presumably promiscuous.

She was taunted with the words jamette and Shabine (half white, or of mixed heritage) on the streets. she is excluded by society, so the protagonist’s grandmother quickly puts a stop to his childish overtures of friendship with the girl, and even Justine’s mother wants the boy to keep his distance. The rest of the story is filled with the narrator’s regret for what could have existed between him and Justine. we see the effect that racial prejudice has had on Justine herself, and the way it poisons a natural and spontaneous attraction that the boy feels for her. With the boy, the reader is left wondering how it would have been “if things had been different”, and no wall separated the pair. The story ends with the boy again admiring Justine from the mango tree. He is now seventeen years old and Justine is now around nineteen. It is a wet afternoon, an atmosphere that creates a suitable setting for what he is about to encounter.

Shabine is a story of conflict rooted in racial intolerance, set in a culture where two races of people are thrown together by their colonial history, locking them in a struggle for basic human dignity and respect. In this story, which clearly highlights racial tension, there is yet, reaching up in the midst of all this hostility, the nameless tree-watching character’s adoration and admiration of Justine, though he does so from a distance. The tree-watching character apparently feels himself unworthy to approah her, he therefore admires her from a distance, watching her change over the years, daring not approach her. In some ways she is below him, just as is perhaps symbolized by her being physically below him when he is in the tree, and yet, in another way, she is above him and beyond his reach because of racial matters that have set a line of demarkation between them. 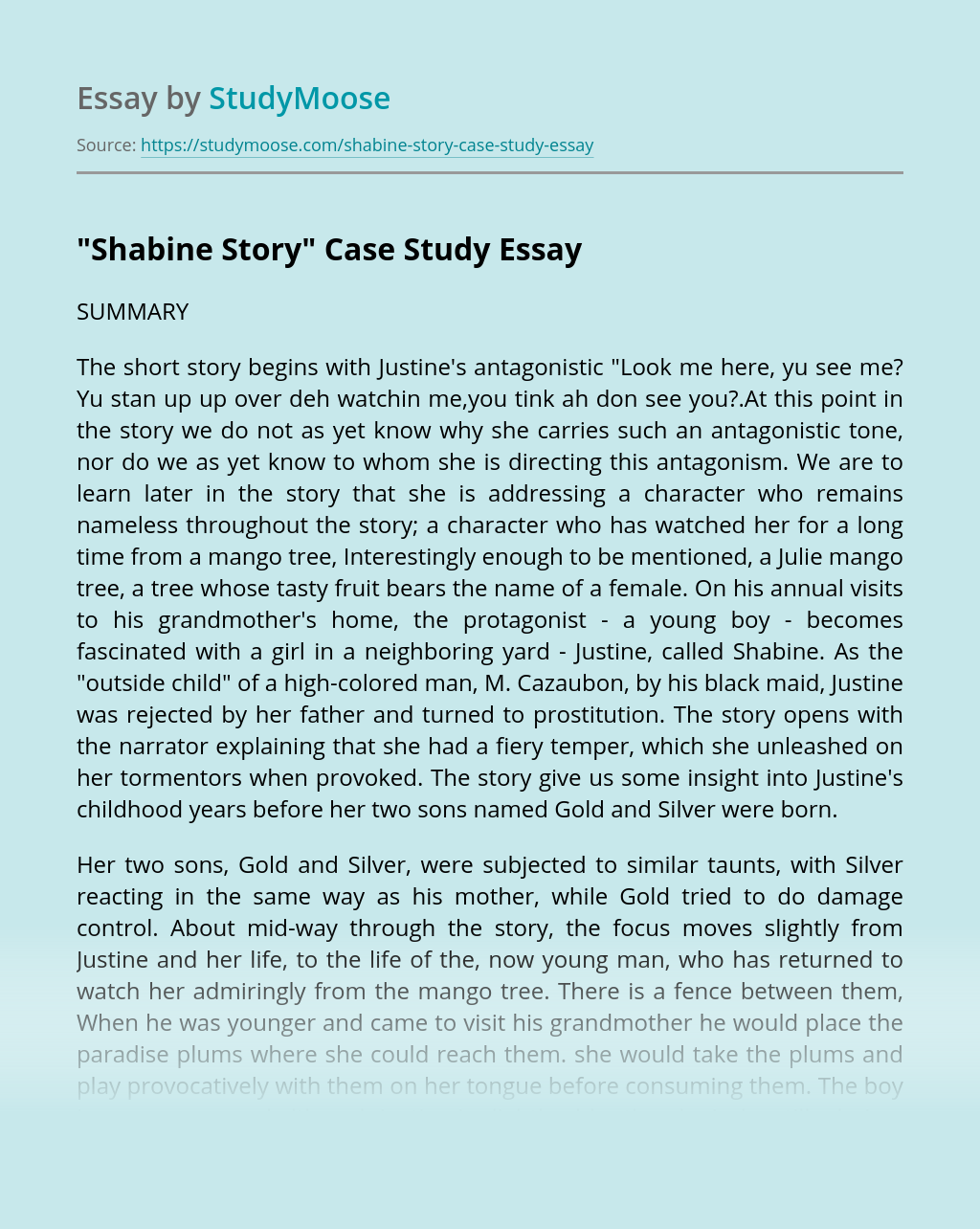