Sexual Imagery in the Media

You are watching TV and you see the latest celebrity that pops onto the television screen who is dressed in revealing clothing, which has now become the definition of ‘sexy’ in today’s society. Sex and sexuality surround us, through television, magazines, music videos and clothing which essentially give a message to the viewer that sex should be spontaneous and free in order to be fulfilling. Adolescences and young children watch television all the time. What happens when they start watching the music channels? The premiere of a new song by some hip-hop group comes on and the very first concern is the sexual activity.

It is too much, too inappropriate and too accessible to these young eye. Within a few seconds, six sexy women charge the scene like a stampede of wild horses from an old western flick. They enter into your sight wearing shirts that seem to be three sizes too small. The white tank tops grip the women s breast so firmly that the cleavage generated is overwhelming.

The faces of these women are layered in makeup to create the look of perfection. All the men gain is viewing pleasure. To younger girls, this is the type of media that can influence minds and can create irresponsible sexuality as it can give teens the wrong idea of gender roles and body image. An article that was published by the courier mail on September 21, 2012 suggested that music videos could be banned from daytime broadcast under a plan by a federal Labor MP to protect children from exposure to sexual imagery.

Labor MP Amanda Rishworth said sexual music videos are unacceptable that such graphic clips were being broadcast on morning television. She also stated that children are consuming sexualised images of women and girls on a daily basis and parents are often alarmed when they see the sort of music video clips on TV every Saturday morning, screened in programs clearly aimed at children and teenagers. Sexually explicit ads and music videos are threatening children’s innocence.

Explicit ads such as Supre, a teenage clothing brand once had a commercial featuring a topless model covering her breasts. What type of a message are ads like these trying to get across? That young girls should behave in a sexually inappropriate manner in order to appear desirable? An article in the Herald Sun by Evonne Barry and Michael Harvey on October 6, 2012 stated that the Federal Government should step in to protect kids from sexual imagery. Images like these (show powerpoint) influence young teenage girls to dress inappropriately and feel like women have to look like this all the time. Magazines are also filled with images of what women are supposed to look like.

With the media constantly invading the lives of woman with these types of images, it is no wonder teens begin to believe in the standards, of what woman should really look like. However, throughout history, sex has been used as a selling tool. Yes, sex sells. When it comes to advertising and sales, we naturally turn to eye candy, pretty women and men who are the ideal faces of persuasion. Popular men’s magazines like Maxim and FHM have experimented often with their covers.

Overwhelmingly, when a sexy, semi-naked woman appears on the cover, it outperforms an image of a male star, even if that star is someone men want to read about. Whether it sells a product or not, many agree that sex will attract attention. Sex sells everywhere, even in music videos. Boy band sensations such as Backstreet Boys or even One Direction are perfect examples. Sure, they can sing, but would they really sell 50 million records if they were fat and ugly? Between the artists, and the extras in their videos, sex has a good grip on the music industry, which will only get tighter with time.

Sexual Imagery in the Media. (2016, Dec 19). Retrieved from http://studymoose.com/sexual-imagery-in-the-media-essay 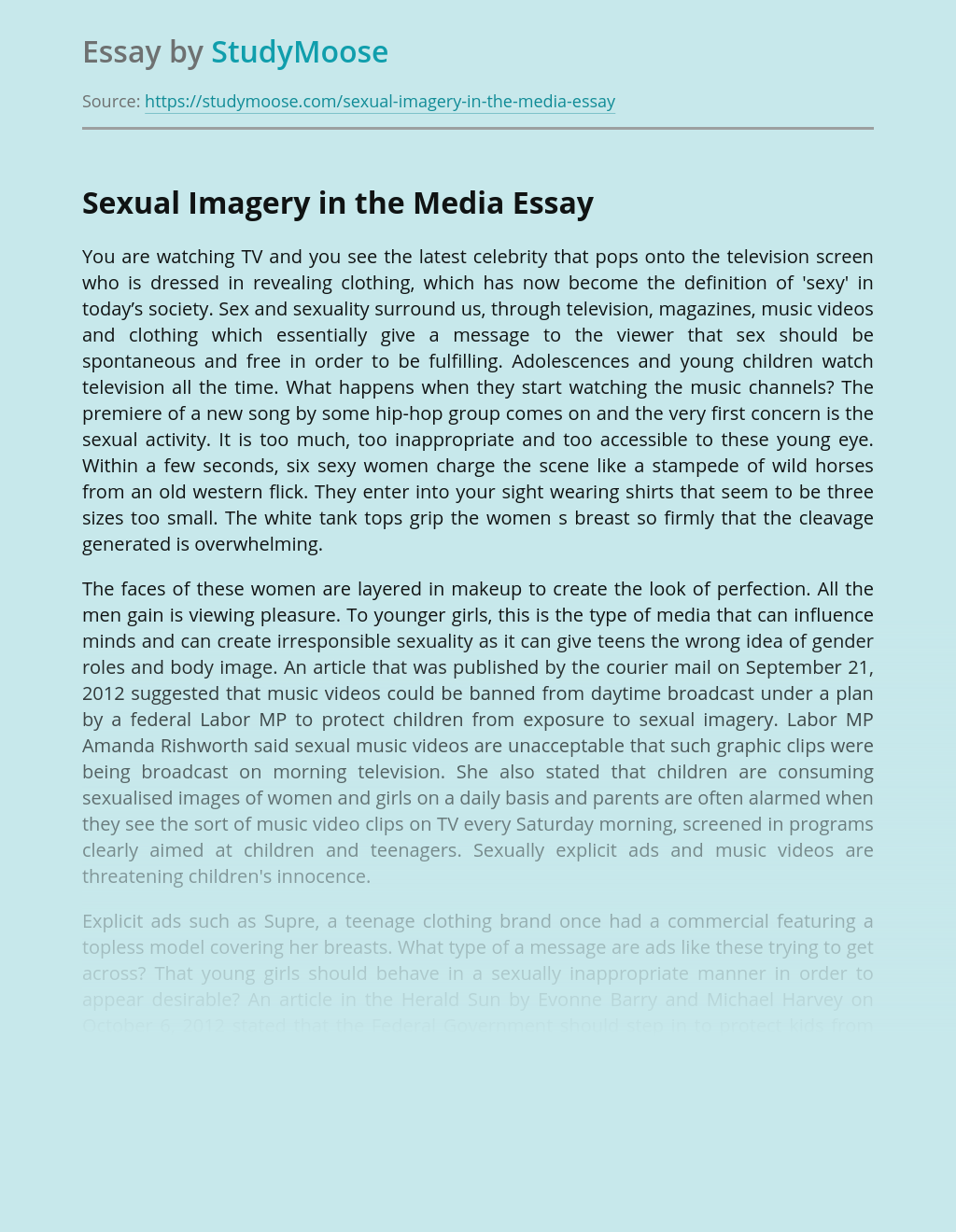 Don’t waste time
Get a verified expert to help you with Sexual Imagery in the Media
Hire verified expert
$35.80 for a 2-page paper
Stay Safe, Stay Original