Hidden Lessons is an essay wrote by Myra Sadker and her husband David Sadker. In the essay they highlight the importance of gender equality in America’s public school system and point out several examples of inequality between genders that takes place in most classroom settings. In this essay they show how teachers inadvertently pay more attention to the male population of the class and spend less time helping the female students. Sadker provides an effective argument in the essay Hidden Lessons proving that inequalities do exist in America’s classrooms.

Sadker provides an effective argument in the essay Hidden Lessons proving that inequalities do exist in America’s classrooms. Sadker stated in the essay that “Girls are the majority of our nation’s schoolchildren, yet they are second-class educational citizens. The problems they face – loss of self-esteem, decline in achievement, and elimination of career options – are at the heart of the educational process. Until educational and sexism is eradicated, more than half our children will be shortchanged and their gifts lost to society.

(Sadker)” The thesis shows how negative of an impact sexual bias can be in the school system. Female students were treated like outcasts and because of this the amount of information that was being taught to them was significantly less than that of a males.

This causes many problems for females later in life when they are not able to obtain the same position in the workplace as a male, and if they did the female was paid less than the male.

The author draws a sense of urgency to the audience by showing the impact of gender bias and calls for action to eradicate sexism in the school system. The claim that Sadler makes is a factual claim as it has been proven time and time again. Even in today’s society women are still fighting for equal pay and equal opportunity. “Women as a whole continue to work in lower-paying occupations than men do. And some part of the pay gap may also be due to gender discrimination – women are about twice as likely as men to say they had been discriminated against at work because of their gender” (Patten). As you can see we still dace the same struggle today as we did forty years ago. The pay gap has gotten smaller over the years but still exists.

Sadker uses many examples in the essay to back up their claim of sexual inequality and takes it another level when they show racial inequality also. “Two second-graders are kneeling beside a large box. They whisper excitedly to each other as they pull out wooden blocks, colored balls, counting sticks. So absorbed are these two small children in examining and sorting the materials, they are visibly startled by the teacher’s impatient voice as she hovers over them. “Ann! Julia! Get our cottonpickin hands out of the math box. Move over so the boys can get in there and do their work”. (Sadker)” This type of evidence is visual evidence they had observed the teacher interacting with the students. Sadker uses another visual form of evidence when dateline plays a clip that shows “a segregated math group: boys sitting on the teacher’s right side and girls on her left. After giving the math book to a girl to hold open at the page of examples, the teacher turned her back to the girls and focused on the boys, teaching them actively and directly.

Occasionally she turned to the girls’ side, but only to read examples in the book. (Sadker)” Both of these quotes are great examples of how rough the classroom learning environment can be for female students. The first example was especially heart breaking, two girls are sitting there clearly enjoying playing with the items that were in the math box and out of know where the math teacher startles them I can visibly them jumping up scared walking away. There was no reason to segregate the boys and girls during the activity it should have been a classroom effort. If it was necessary to separate the two groups the teacher should have allowed an equal amount of time for the two groups and she should have approached the two young girls calmly and explained to them that their time was up.

In the second example the teacher shows absolutely no interest in teaching the female students. She was only worried about the success of the male population of the class. The teacher indirectly taught the female students by them just being able to hear her but with her back to the female students how much could they have actually heard and understood. Both of these quotes are great support in Sadker’s claim that sexual bias is present in America’s school system and unless sexual bias is eradicated from the school system it is a problem we are always going to face.

In some cases teachers, school officials, and the media could not see what Sadker saw and insists that sexual bias is not a problem that plagues the school system. Sadker states “To the naked eye some of the visible signs of sexual bias cannot be seen. Sadker states “We had forgotten how difficult it was to recognize subtle sexism before you learn how to look. It was as if the Dateline staff members were wearing blinders. We halted the tape, pointed out the sexist behaviors, related them to incidents in our research, and played the tape again. There is a classic “aha!” effect in education when people finally “get it.” Once the hidden lessons of the unconscious bias are understood, classrooms never look the same again to the trained observer. (Sadker)”

This is a great example of a concession which is when the author acknowledges that all readers may not agree with every point that is being made. This shows that some people may not see that what is going on is not sexual discrimination but just the normal hectic classroom. The author shows that you have to educate yourself before you are able to see what was actually occurring. One counter argument that can be made by some readers is when Sadker talks about the girl that was used to hold the book in front of the class. Some readers could argue that the teacher did this to enable the student to be a more active participant in class. Although this is one example Sadker supports his claim with not only accurate evidence but also recent, relevant, and reliable.

Sadker has a valid claim and proves with many studies and classroom evaluations that sexual bias is prevalent in America’s classrooms and has impacted the lives of many females causing them to not receive equal opportunities in the work place as males. I believe that Sadker uses many supporting details and examples to argue his case. The examples he uses has the power to touch the hearts of the readers and makes them think twice when observing a classroom setting. The simple thought that sexual bias is still present in school systems today may be one of the reasons that it is still present in the workplace. I believe that if sexual bias were to be cut off in the school system that it may cease to exist in the workplace also. 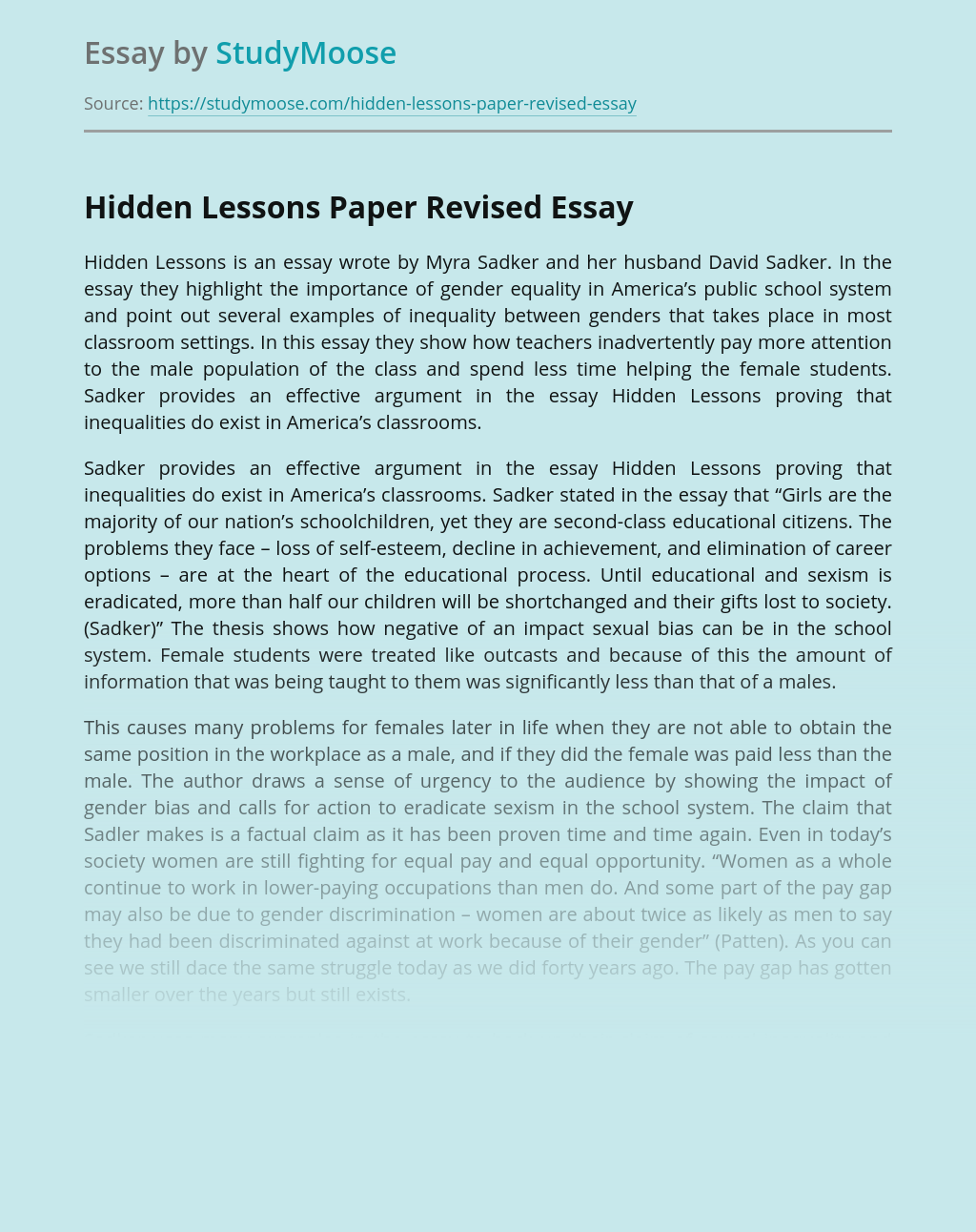