Several Characters Can Have Loyalty

Not everyone possesses the quality of loyalty, but those that do are worth having a relationship with. The author of Cue for Treason, Geoffry Trease, demonstrates this trait in many of the characters. The most loyal bond in this book, which took place very early on in the novel, was Peter and Kit’s. One of the most significant bonds has to be amongst the Secret Agents, the Queen, and all of England. Lastly, the most heroic form of loyalty is portrayed by Tom Boyd, Peter, and Kit.

Don't use plagiarized sources. Get your custom essay on
“ Several Characters Can Have Loyalty ”
Get custom paper
NEW! smart matching with writer

Each one of these characters do not betray each other once. So, several characters in the novel show loyalty to one another throughout.

Peter and Kit are faced with the challenge to be completely loyal to each other from a very early stage. Kit keeps a secret from everyone because it could possibly destroy her. Peter is put to the test when he figures out she is a girl pretending to be a boy.

This is discovered when they are physically fighting, and Kit is pushed on her chest. Peter proves his loyalty verbally, “‘I shant tell anyone,’ [Peter] said. ‘You won’t? Thanks Peter. Ever so much’“(Trease, 85). Kit thanks Peter graciously when he agrees to stay loyal to her. He could easily ruin Kit out of jealousy, but he decides to be a good person and not betray her trust so early on. Their relationship can only progress from this point… and it does. When Kit knew Sir Philip would be attending one of Shakespeare’s plays; she knew she couldn’t show up because of their situation.

When she came strolling in after this play, Burbage threatened to thrash her. Peter, knowing Kit’s secret about her sex orientation, stands up for her and did not allow it. Knowing he can face drastic consequences, he still says something, “’You mustn’t,’ I shouted, clutching his arm. ‘You mustn’t, really, Mr. Burbage’” (Trease 112). The duo proves to stick up for one another, no matter what the consequence may be. Kit and Peter are faced with a major test of their loyalty for each other again.

During the big fight on horses down the road, Peter commands Kit to run away and leave him behind. Instead she stays to help him and not leave him on his own. No matter what he said she will not betray him, “’Ride on!’ I bawled… Again Kit ignored my advice. She argued afterward that there was no help she could hope to fetch, and in those circumstances she wasn’t going to leave me” (Trease 253). This shows how much the two care for each other, and will not abandon each other when situations get rough. Although the pair fights numerous times, in the end they are always there for each other, and never betray each other’s trust. But, this is not the last time loyalty was shown.

Proving he will do whatever it takes to keep his Queen and country safe. He proves that he thinks about the bigger picture in dangerous situations, “’If it’s what I’m afraid it is, we’ve got to work quickly- more quickly than I thought. It’s, a matter of life or death, and not just one life, but many’” (Trease 172-3). He proves he is a hard worker, stays committed, and does things for the common good. Though he is one of the best, he is not the only Secret Agent. There is more than just old Agents, but new comers as well. Peter Brownrigg is one of the newest to become a Secret Agent. Peter having almost nowhere to go, accompanied by Kit, becomes a Secret Agent and puts himself into life threatening situations to protect the Queen and everyone under her wing, and both characters prove to be a loyal agent.

Peter knew he had to do whatever it would take especially when Tom did not return, “’Now Tom Boyd… hasn’t come back, I’ve got to take on his work… But Kit, I knew, would send the news if I couldn’t’” (Trease 214). Peter doing whatever means are needed, along with Kit takes his new profession very seriously and staying loyal when situations were dangerous and it would have been easy to quit. By all of the Secret Agents doing what they had to do, no matter what the expense, definitely earns them the trait of loyalty.

One trio of people have a strong bond, only after knowing each other for a short period of time. This group was amongst Tom Boyd, Kit, and Peter. When Peter and Kit’s first mission was assigned, they were told to go back to Cumberland, with Tom. Peter and Kit had to trust that it was not going to be a set up, and Tom had to trust these kids would not screw up. The very first conversation they have, shows they all needed each other, “’ So you’re my guides, are you?’ [Tom] said… If Tom Boyd went alone, he would be as helpless in the mountains as a blind man; and in the villages, talking to folk in that somerset voice of his, he’d be as noticeable as a Negro. So it was agreed [Peter] should go with him” (Trease 156-7). They have to trust each other very early on.

So, the three of them continued on their journey, staying committed to each other throughout. When reaching their destination, the peel tower, they all agree to devote their time to the lookout at the peel tower, keeping a close eye and remaining in position even if a dangerous situation occurs. They plan out exactly what they must do together, “[Peter, Kit and Tom] scarcely whispered as we moved down the hill. Soon we stood at the foot of the steps again, and the peel blotted out a great oblong of star-speckled sky… [Peter] knew my job. I turned away and tramped down the bridle path” (Trease 175). Showing their commitment to the task at hand, regarding the Queen, the trio take shifts watching the peel tower, and following the plan made whether it get dangerous or not. However, watching the peel tower was not their last opportunity to be faced with the task of being loyal to each other. Soon one of them go inside the peel tower in search of information about the assassination.

When Tom goes in and does not return, Peter desperately decides to go in searching for him, knowing that it was a dangerous situation in which he may get hurt. Peter takes command, and jumps in to the task with full force, ensuring everyone’s safety in the process, “’I’ll go.’ [Peter] said. I was in command for the moment. I’d have given a lot for Kit’s company, but I knew I wasn’t justified in taking her” (Trease 179). Peter and Kit both verify their loyalty towards Tom, by insisting on leaving no man behind, and entering a risky area to guarantee everyone’s wellbeing. Throughout their short, heroic, dangerous adventure, the three stay devoted to each other even when it means risking all of their lives for one another.

In the novel, Cue for Treason, all characters demonstrate loyalty to each other, knowing it can have a positive or negative outcome. Kit and Peter were loyal to each other throughout the entire the book, strengthening their relationship the whole time. The Secret Agents die for the Queen, and put themselves into risky situations. And finally, Tom, Peter and Kit are willing to die for each other; because they knew what they are doing is for the common good. No matter what the situation may be, good or bad, dangerous or life threatening, all characters are loyal to someone in some way.

Several Characters Can Have Loyalty. (2016, Oct 09). Retrieved from https://studymoose.com/several-characters-can-have-loyalty-essay 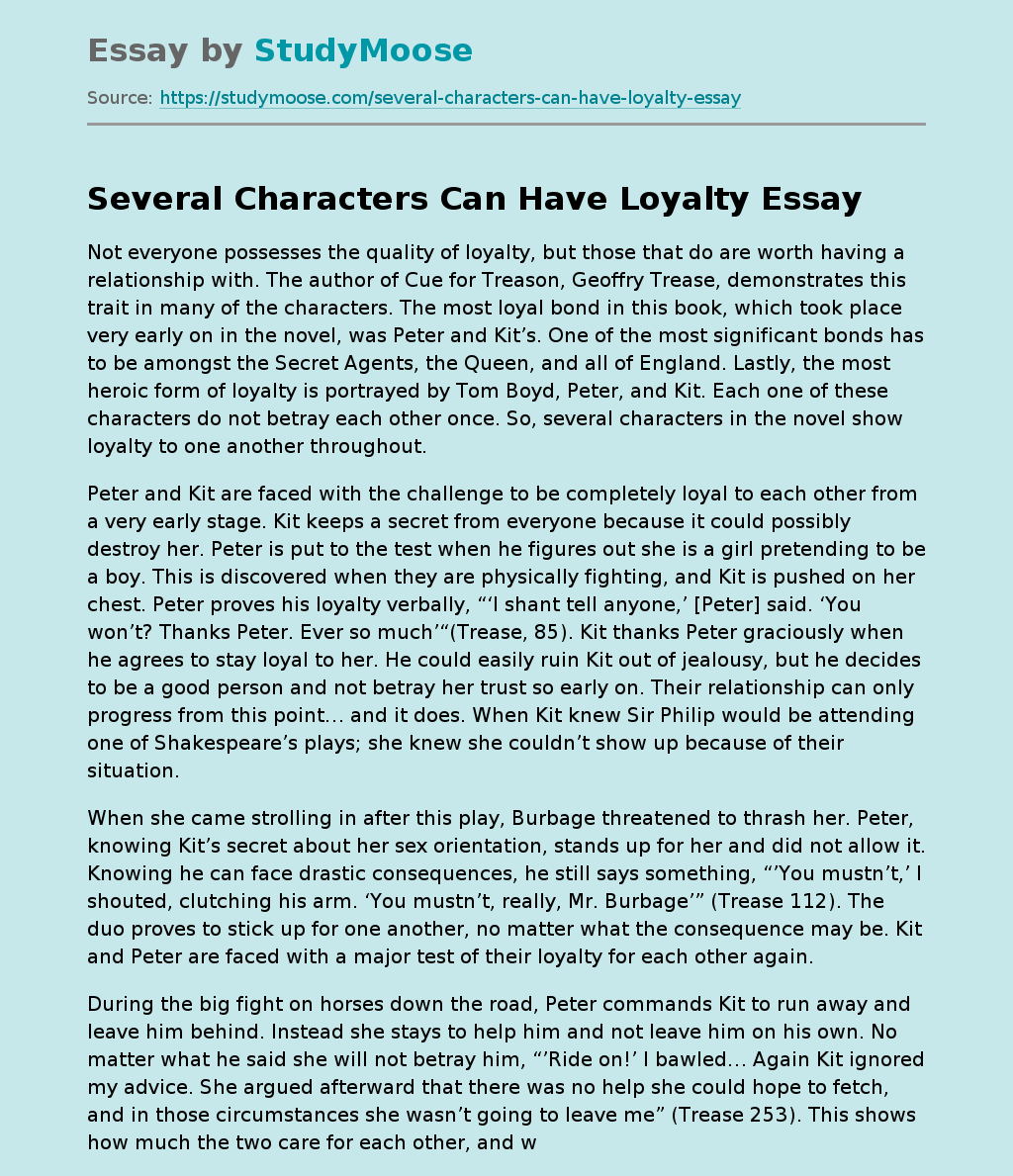