When one thinks of the term “Rite of Passage” it’s generally thought of as old world traditions involving some sort of circumcision or test of strength, to become a man. Upon researching the topic several articles and journals covering these types of rituals was found. After further research I found that not only is the military considered its own culture but within the military are other cultures. Special Operations or Special Forces culture is the elite group among the military they are trained to endure the most grueling circumstances.

Don't use plagiarized sources. Get your custom essay on
“ Services and Special Forces Culture ”
Get custom paper
NEW! smart matching with writer

Rites of passage to join these groups are vigorous mentally and physically, Navy SEAL’s and Air Force Pararescuemen (PJ’s) have the highest fail rate during their rites of passage if successful these men will form a bond closer than family.

Navy SEAL’s are internationally known for their BUDs (Basic Underwater Demolition) training. This training lasts 6 months in Coronado, CA at the Naval Special Warfare Training Center (Divine, 2014). SEAL’s are an elite group of men who are pushed to the limits and beyond realizing along the way they can do more than ever thought possible.

In his article “Hell Week” Waller (1994) emphasizes, “Hell Week is a sacred rite of passage for becoming a SEAL […] that a man driven to the limits […] during Hell Week […] Those who quit […] are the ones Navy SEALs believe would quit in their real-world missions. Hell Week teaches a commando to turn off pain and focus on his mission.” (para. 5). Every trainee is assigned a “swim buddy” they are instructed and embedded from the beginning to never leave their swim buddy.

Leave no man behind is more than a saying for these prestigious warriors it engrained in everything they do from day 1 of their training. Hell week starts with trainees being woke up by instructors running in firing machine guns with blanks. The rounds aren’t real but the noise and the hot brass that is ejected are quite real.

From there it just gets worse the trainees are ridiculed, belittled and encouraged to quit. Waller (1994) explains a process known as “Surf torture” the trainees are in a pushup position and then bear crawl to the edge of the water. At the edge of the water they are halted and stood up. Locking arms they march into the harsh frigid Pacific Ocean. They are ordered to sit upon this order the trainees (arms still locked) sit together in the cold water. This training is to prepare the trainees who make it through for real world operations. After 15 minutes of sitting in cold water the class is ordered to stand up, turn around and walk on shore. At this point one of the four Navy doctors assigned to the class checks each trainee for any sign of hypothermia. After five minutes out of the water they are then ordered back in the water.

Hell Week starts on midnight on Sunday night and are deprived of sleep only allowed 4 hours of sleep all week. They receive their first sleep cycle at 6:30 A.M. on Tuesday morning falling instantly in to REM sleep. Later that evening they will perform one of the most dangerous parts of their passage. One of the abilities a SEAL must learn as to land his boat anywhere, including sharp rocks off a coast. That kind of arriving, called rock portage, was the most dangerous of all. Smashing waves would propel the boats into the rocks, crushing bones and actually breaking backs if the paddlers weren’t cautious. During the evening is the only time SEALs penetrate onto a coast.

The instructors expect injuries during this part of training or evolution as they call it. On Thursday evening the students will undergo their third and final hygiene inspection. These men are so battered, bruised and exhausted at this point that personal space is no longer an issue. Standing naked in the barracks the men are leaning on one another to help support one another due to injuries. Students who are too injured to go forward at this point are usually held for another class and rolled forward to Thursday. The class started with 104 trainees and by Friday only 33 members would complete hell week to move on to the next phase of training.

The first part of PJ’s training is a “gut check” the 10-week Pararescue/Combat Control Indoctrination this course reveals early on who will quit when things get tough. The day starts at 4:30 A.M. and doesn’t stop until after sunset. They are put through a daily routine of circuit training involving swimming, running and calisthenics. The instructors also give what they call “smoke sessions” which are marathon workouts that make recruits muscles burn. This training is a warm up for the pool or the “water confidence training”. More trainees fail this part of the passage than any other. Motivation week as the PJs call it is the Air Force’s version of SEAL Hell Week it’s a kinder gentler military now days. Motivation week is similar to SEAL’s Hell week as in the instructor’s abuse the trainees making them perform with little to no sleep.

Constantly testing them mentally and physically. Similar to SEAL training these airmen also get ridiculed and are tested physically and emotionally. They go a step further and incorporate the EMT course in to everything a course that would be difficult on a normal basis is made harder while continuing physical training and remembering dive training, and survival training. These men in their 2 years of training become expert marksmen, mountain climbers, certified Emergency Medical Technicians (EMT) among a list of things. The indoctrination course is just the beginning of training. Two months of running, swimming and calisthenics designed to weed out the physically and mentally unprepared students. During this course they focus on pool work swimming with weight belts, water treading, buddy breathing “sharing an oxygen tank”, and drown proofing. This course is designed to give students confidence in water to prepare for Scuba school.

The next portion of training for the pipeline is the U.S. Army Special Operations Underwater School. This is where the trainees earn they “bubble” badge. Treading water with 16-pound weight belts or with your feet bound and hands tied behind your back. Instructors also tie knots in the trainee’s regulator hoses pull their scuba masks off underwater and harass the trainees. To pass this portion of training PJs must perform a 3,000-meter underwater navigation swim.

The third portion of their training is the U.S. Navy Underwater Egress Training which is only a 1 day course. They are trained to escape aircraft that are sinking they are strapped to the dunker dropped in icy water and immediately flipped upside down. The trainees must unbuckle themselves and swim out.

After their day of what most likely feels like a vacation to the PJs they are off to U.S. Army Airborne School this is where the ‘para” in pararescue starts they learn to jump out of aircraft. They perform make five parachute jumps and earn their jump wings.

Next is the U.S. Air Force Survival School where they learn to evade and escape the enemy or resist if captured. They will spend a week living off the land with minimal equipment and supplies. After survival school is five weeks at U.S. Army Military Freefall Parachutist School this course is a more in depth parachute course than the airborne school. Students learn how to freefall from high altitudes using mini oxygen bottles. Also how to rig parachutes, recognize hypoxia, mass exits, night operations and perform 30 freefall jumps.

The final course is the Pararescue Recovery Specialist Course for 20 weeks trainees combine all of their training they have received. While also receiving advanced medical training, learn tactical movement, weapons handling, air operations, mountain climbing, and aircrew recovery procedures. They have to spend a week in the Pecos Mountains implementing all they have learned for a final exam.

While SEAL’s are used in small groups to perform tasks anywhere from taking out high-profile targets to doing reconnaissance missions and providing intelligence. U.S. Air Force PJs have one basic mission to save lives these men go through years of training to become combat life savers. In his article “Superman School” McKenna (2000) states “Unlike other special operators, who search and destroy, PJs “search and save.” Think of them as SEALs with stethoscopes. They’re extreme emergency medical technicians, a kind of cross between Schweitzer and Schwarzenegger.” (para. 9). Like most Special Forces units women are not allowed.

The two-year “Rite of Passage” ritual known as the “pipeline” an approximate 90 percent dropout rate. While most other services believe U.S. Air Force airmen are the weak little brother of the military. PJs trump this stereotype in every way while most other branches won’t admit it PJs are the best trained special ops forces in the U.S. Weir (2013) put it best “Just another day at the office for the PJs who work under the humble motto “That Others May Live.” They’re a special breed, trained paramedics, who are also highly skilled warriors, able to fight their way in and out to rescue a wounded soldier under any conditions”.

As I have mentioned the Special Forces culture is a different mindset and among that culture are subcultures that have their own standards and rules. Each ones rite of passage is similar but in essence they are all completely different. While SEALs are trained warriors and deadly assassins while PJs are a highly respected, small, quick combat rescue unit with the motto “So others may live”. Both of these groups have been through the best training the world has to offer. Becoming an elite Special Forces member is not easy, these cultures each have their own rite of passage that these men endure and will not forget bringing them closer to each other forming a bond that is closer than family. 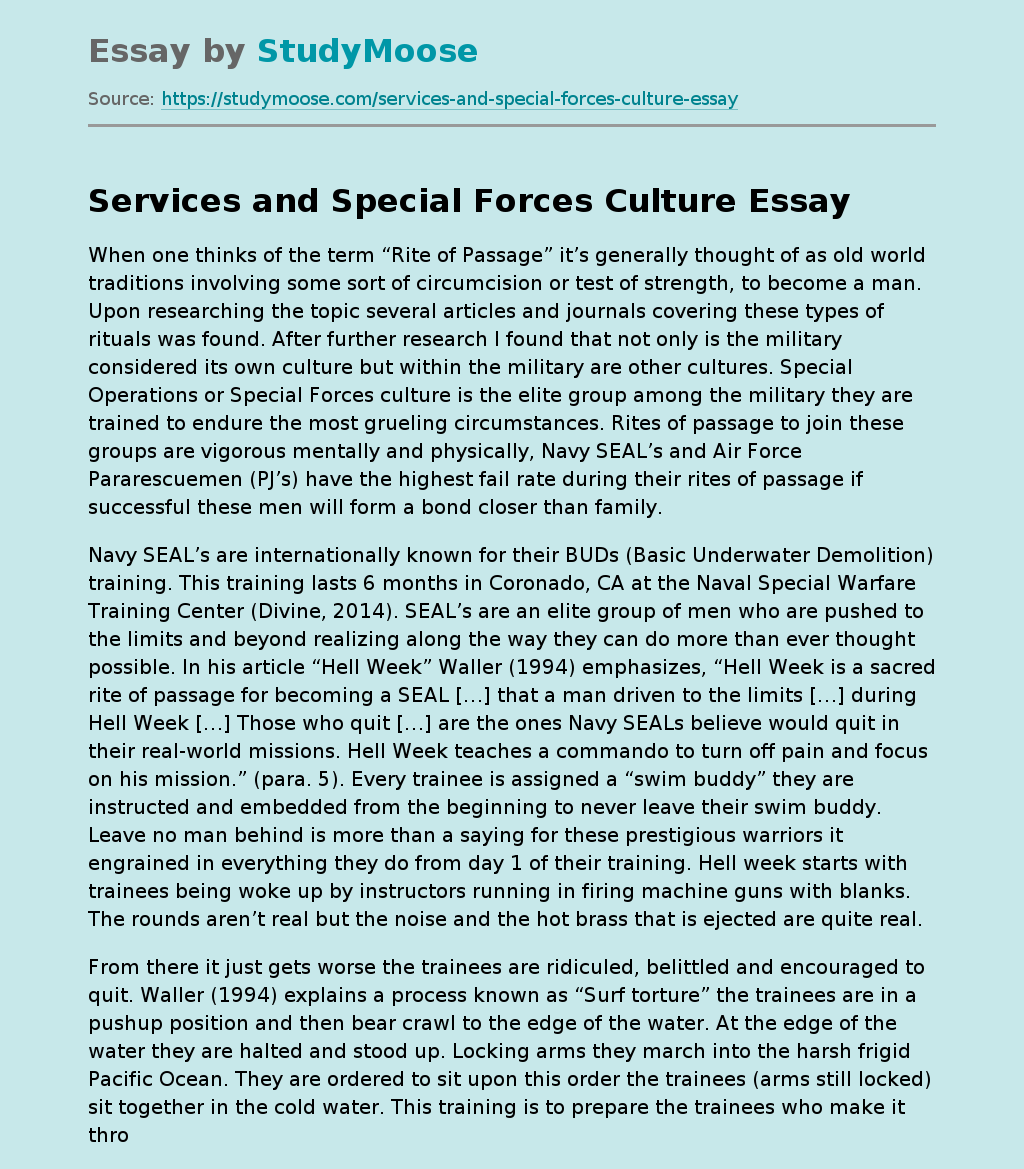