SHIV LLC is an up and coming company that is looking at becoming one of the leading solar panel companies that covers both the east and west coast. They are looking to establish three new sites; one is in Los Angeles, another in Dallas, and the final in Houston. While the separate sites are geographically separate, they are operationally a single unit. In order for SHIV LLC to establish themselves as a leading solar panel company, they need to acclimate themselves as one of the leading technologically advanced companies.

Don't use plagiarized sources. Get your custom essay on
“ Server Proposal ”
Get custom paper
NEW! smart matching with writer

Being able to manage customer accounts, finances, research and development, and daily IT duties is imperative for the company being able to survive in the competitive energy business. There are many new things in Windows Server 2012 that SHIV LLC can take complete advantage of. Managing user and groups became much easier with the new user groups management. You can create user groups and add user accounts to them. User account permissions can be managed through their user group memberships (What’s New in Windows Server Essentials, 2013).

One of the newest and most up to date features is being able to manage mobile devices through the dashboard. When Office 365 is integrated with the server mobile devices can be managed by using Exchange Active Sync functionalities. Certain functions such as performing remote wipes, email access, and password policies can all be done for mobile devices from Server 2012. Since your company has three separate sites then one of the tools you might want to take advantage of, is Office 365.

Office 365 is the Microsoft Office suite of tools, except better. Office 365 uses the cloud so that all files and folders can be made available on the cloud so that they can be accessed from anywhere. Agents can get into client files while at the client’s location. Calendars and email can be updated and accessed from any location. Office Online can take any browser that a user has and create, edit, and share files. Integrate your server with Office 365 and distribution groups can be managed from the Dashboard. Server storage and data protection are two things that Server 2012 have made changes to that SHIV LLC would find useful.

File History backups are configured per user instead of per device. Also, you can automatically restore your data through File History backups on a new computer if your old computer is no longer functional or is unavailable. The first time you log on to your new computer in the network, you are prompted to restore your files from your File History backups (What’s New in Windows Server Essentials, 2013). A space quota can be specified for a server folder. When that folder grows beyond its defined quota, then an alert will be given. Shiv LLC will need a total of six servers. The basic server roles are that two will be used for files and shares, three will be used for DNS and DHCP (one at each location), and the last one will be backup in case one server fails. All six servers will run Windows Server Datacenter. This server will function with multiple server roles.

The roles assigned to them will be:

The third, fourth, and fifth server will be deploy the DNS role, which provides name resolution for TCP/IP with temporary IP addresses and the DHCP role, which provides client computers on the network with temporary IP addresses (Microsoft, 2013, pp. 1-7). The final servers will also be used as backup servers. If any of the roles or features on any of the three primary servers that fail then the backup will be the fourth, fifth, and sixth server.

The servers will be located at one location, except for the DNS servers that will reside at each location. The primary three will most likely in Dallas or Houston since it experiences the least amount of weather related problems that might cause downtime. The servers will be deployed manually. The best way to set up any network is to do it manually, that way any specific details can be dealt with.

For the requirements of SHIV LLC only one domain controller is required. However, for fault tolerance, two will be used. The main DC will be located in Dallas or Houston, where the rest of the servers are located. A read-only domain controller would be located in Los Angeles. Only a few of the IT’s need to be at the Los Angeles location to perform simple tasks and fix any IT related problems that might occur. The majority of active directory features and roles can be handled at the Dallas or Houston location. Using the read-only domain controller will make it so no one can “hack away” at AD. As long as it is read only then there won’t be any problems with user trying to manipulate the DC in any way.

Active Directory will be organized as shown above. Each user will reside in the department that work for and group policy will be applied to each department. Certain applications might need to be used by multiple departments and will have their own policies. Lastly with the implementation of mobile devices, they would reside in their own OU with their own policy applied.

The DHCP scope will be two entire private class C range, ie 192.168.1-2.0/24. Since the company is only starting out there is only two ranges that are needed. However, there will be some reservations for certain network items like printers and scanners. Reservations will also be made for all network equipment and servers as well. Purchasing IP ranges can become expensive and having more than necessary can be troublesome. There is no need for a second class C range unless the company expands. DHCP will be ran using a split scope option. Split scope DHCP uses two independent DHCP servers that share responsibility for a scope. Typically, 70% of the addresses in the scope are assigned to the primary server and the remaining 30% are assigned to a backup server.

If clients cannot reach the primary server then they can acquire an IP address lease from the secondary server (Understand and Deploy DHCP Failover, 2013). The main server will host the majority of addresses and the backup server will host the remaining and act as a backup as well in case of failure. Since mobile devices will be used then the lease time for addresses can only be 8 hours or so. If mobile devices are not used then the lease time can be a much as 8-9 days. SHIV LLC will use a split DNS to protect the data and integrity of the company. Split DNS will make it easy for users and consumers to be able to navigate via the Internet and the intranet. Two virtual servers will be stood up on the DNS to handle this. The DNS namespace design will be simplified for both the user and the consumer research, products, solar panels, energy etc.

Deploying applications across the network just became simpler with Server 2012. Group policy allows an administrator to push an application over through one of two ways, publishing the application or assigning the application. Applications can only be published to users, but assigning applications can be done on either computers or users. When an administrator publishes an application they are making it available to the user without actually installing it. When user log onto their workstation they will notice that the application is available for them to install. Assigning an application can be completed on a user or a computer. Like publishing, the application is not actually installed, due to not overwhelming the servers with multiple installations at once, but rather is installed when the user tries to open it up via an icon or some other means. SHIV LLC will likely need the Microsoft Office suite of tools and any solar power designing software that is required by the users. These and any other applications can be pushed over using group policy. As long as the hierarchy is accurate, then only the users or computers that need certain applications should have access to install them.

The file system will reside on a separate server that will be assigned an IP address. Each user will have their own drive virtual drive that will be for their personal use. The network files will be on a share drive and that share drive will be mounted before any user log in for the first time. Using the File Server Resource Manager will be play a big part in managing the share and the user’s drive. Each user will be limited to 2 GB of drive space for their own personal use. As far as the share drive is concerned each department will be given the initial amount of space needed for their department. The Human Resources and Finances department might not need as space as the Sales Department. A log event will be created when the quota limit is within 90% of capacity, as well as an e-mail sent to the IT department.

FSRM can prevent certain departments from saving audio or video files. Finances has no need for a video file, but Research and Development might have that need. A script can execute when the folders exceeds 500 MB of data that cleans up old and unused files (Barreto, 2008) Finally printers will be available at both sites and those printers will be able to print from either site. A member of the Accounting Department can print a document in LA when they are sitting in NY. SHIV LLC will be equipped to challenge the competitors around them with the highest technology that is available. One of the main reason that business succeed is that they have information available to them at an instant, and the outlined design above is what will give them that. SHIV LLC is prepared for the future of energy. 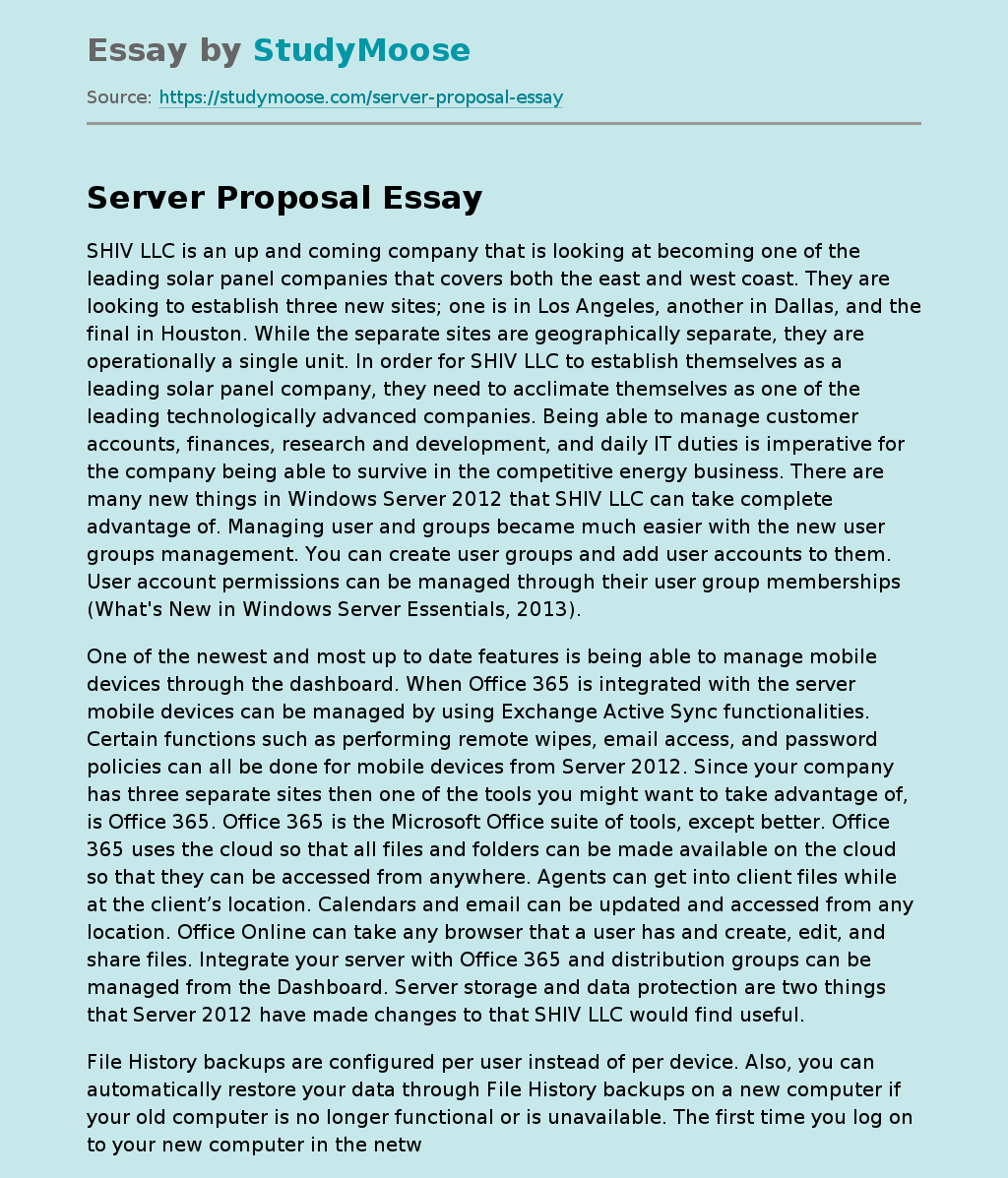