Serial Killers Are Worth Human Admiration

What makes a serial killer is something that varies with each person. Many of the histories top serials killers are very different. Each of the individuals are classified in many different ways. Numerous sociologists and criminologists have dedicated their entire careers to the research of individuals who prey upon man.

As a result, there is never a shortage of information about what makes a serial killer or how that serial killer grew up. With an estimated 600 serial killers living and working in unsuspecting communities, understanding the origins and for causes for their anti-social and psychopathic tendencies is of the utmost interest and importance to researchers and law enforcement officials.

Don't use plagiarized sources. Get your custom essay on
“ Serial Killers Are Worth Human Admiration ”
Get custom paper
NEW! smart matching with writer

Statistically, these individuals are believed to be responsible for 3500 to 5000 murders every year according to the Victims of Violence. Current research on individuals with anti-social and psychopathic tendencies have copious amounts of information on the serial murderer’s psyche, biological development, and environmental development. Very little research has focused on the elements of a serial murderer’s young life, which may have played a crucial part in their life.

Proficient in: Person You Admire The Most

The Federal Bureau of Investigation FBI says, these individuals differ based on the number of victims, motivation, and time between the murders. A mass murderer is defined as a person with four or more kills occurring at one time with no discernible cooling down period in between the murders. In order to be classified as a spree killer, a person would need to kill two or more people with no rest period between murders.

But defining a serial killer, has proven to be more of a problem.

The number of murders needed to classify as a serial killer has ranged from two to ten murders, occurring in multiple locations, and with a rest period between murders. The law enforcement has made the decision to keep the number of murders on the low-end scale, two or more victims, so that law enforcement is able to respond quickly to potential of “want to be” serial murder investigations. The qualification for a serial killer includes the serial killer being a stranger to the victim while also having no potential for financial gain as the crimes are generally mentally motivated.

While the victims are generally random, they may still have a symbolic as heart filled meaning to the killer. An example would be, John Wayne Gacy Jr. killed many homosexual teenagers and boys because his own father was highly homophobic and expressed that homophobia by being physically and verbally abusive toward him; due to John Wayne Gacy close attachment to his mother and sister, his father saw him as a homosexual. This lead to a need of want and love by a male character. He chose young males to dominate them. And to express what his father did to him.

Contrary to popular belief, not all serial killers are middle aged white males. The Federal Bureau of Investigation has made it a point to announce that serial killers come from all ages, races, genders, and socioeconomic statuses. But, on average a serial killer profile states that serial killers are generally, a white male, low-middle socioeconomic status, in his 20s or 50s, has a history of childhood abuse or neglect, is sociopathic or psychopathic, would blend into his environment, and appears normal to others. In 2007, an eight-year-old Indian boy named Amardeep Sada, became the youngest serial killer in the world after strangling three infants over the course of a year. No one would have expected htat from an eight-year-old child.

One final characteristic that many serial killers tend to have in common is the sexual gratification they attain by taking the life of another man. Also known as sexual sadists, these people bring in their deviant sexual fantasies into their killings. This is a very big characteristic that has been a common pattern in the serial killer profile. Sadism is defined as the infliction of suffering for sexual gratification. Sadists enjoy watching victims try to escape from a fright. A sadist will inflict pain on someone in order to see a terrified suffering reaction. The tears streaming down the victim’s face, the terror in the eyes, and the pleading for mercy are reactions that please the sadists. Tormenting a victim is a way for sadists to boost their egos and self-worth. Having complete control over a helpless person makes them feel like there are in control in there lifes.

There are many different forms in which a serial killer arises, and the two main groups are organized and disorganized killers. A organized killer will be highly methodical, planning every part or step of a murder in advance and even stalking their victims until they have fully planned the entire crime, including the escape. Organized killers will be very intelligent, and social, will likely be married with children, will come across as charming and successful, and will bring their own vehicle and weapon when they commit the crime.

An addition to organized and disorganized killers, law enforcement further categorizes a serial killer by classifying one as either a visionary killer, a mission-oriented killer, a power control killer, or a hedonistic killer. A hedonistic killer are people who are usually schizophrenic and believe they are being told to kill by an outside force. In 2016, a man in Dublin Ireland killed his parents with an axe because he said that an angle was sent by God to tell him that he would be King of the heavens if he did so. But a mission-oriented killer is an individual who believes that it is their responsibility to rid the world of certain types of people, such as prostitutes, gays, or a certain race.

A power-control killer is often an individual who feels they lacked power or authority in one point of their lives. These individuals will kill in a manner that gives them the ultimate power which would be the power over life and death. Furthermore, the hedonistic killer is the most common form of a serial killer and is further classified as a comfort, lust, or thrill killer. A comfort killer will usually kill for some form of short gain or other benefits that will provide them with some form of comfort. An example of this would be a homeless person who kills other homeless individuals in order to obtain the victims belonging. Jeffrey Dahmer is an example of this type of serial killer since the mutilation of his victims would long continue after they have died. This hedonistic killer thrives on fear and death. Someone who uses death as their adversary. They would stalk their victims and threaten them with great violence before the kill.

Sexually abused children suffer from low self-esteem, depression, and relationship difficulties. Childhood neglect is defined as the failure of a parent, guardian, or other caregivers to provide for a child’s basic needs which may consist of physical, medical education, and emotional needs. Neglect of a child at a young age is traumatic to the psychological development of a child.

Also, the child’s needs human interaction in order to develop healthy social abilities. A child who is neglected at a young age is also at risk for anti-social traits, borderline personality disorders, and violent behavior. An example of this would be Charles Manson. Manson’s upbringing was unpredictable and chaotic: He spent time with relatives, in boys’ schools where he claimed to have been raped by another student, and, eventually, in jails and juvenile facilities. He later headed the Manson Family cult, a communal California-based group that carried out his violent demands. He was convicted of seven counts of first-degree murder and remained in prison until his death.

Another characteristic seen in a murderer is emotional abuse. Emotional abuse is defined as a pattern of behavior that impairs a child’s emotional development or sense of self-worth and is one of the hardest forms of abuse. Since emotional abuse is generally found along with other forms of abuse, the long-term consequences for this form of abuse are the same as physical abuse, sexual abuse, and neglect. Emotionally abused victims tend to see themselves as having being less of a valued person due to their abuse. This will start to develop low self-esteem, depression, suicidal thoughts, anger, and many additional psychological consequences.

An example of this is the serial killer Edmund Kemper. He hated women – he murdered several members of his own family and six young women in the Santa Cruz, California, in the 1970s. His parents divorced when he was 9-years-old and his alcoholic mother blamed him for the divorce. She was overly critical to her son and forced him to live in the basement of the house so he couldn’t be around his sisters. Verbal abuse and slandering his son in front of friends and his school was something normal for his child’s life. The mother would buy him a cat but love the cat more than him. From a young age, Edmund fantasized about killing his own mother and he also turned to torture cats to release his frustration. Aged 15-years-old, he was sent to live with his grandparents on their farm and they confiscated his rifle because he wouldn’t stop killing animals. Edmund turned his rage on his grandparents, shooting them to death.

This These elements that fall into what makes a serial killer area variety. Never two serial killers are the same. The reasoning of what makes a killer are deeper than what one sane human being can fathom. No one wakes up one day an becomes a killer. There is always a reason why they do what they do. From sexual, physical. Emotional abuse there are many components that make a killer what they are.

Serial Killers Are Worth Human Admiration. (2021, Dec 08). Retrieved from http://studymoose.com/serial-killers-are-worth-human-admiration-essay 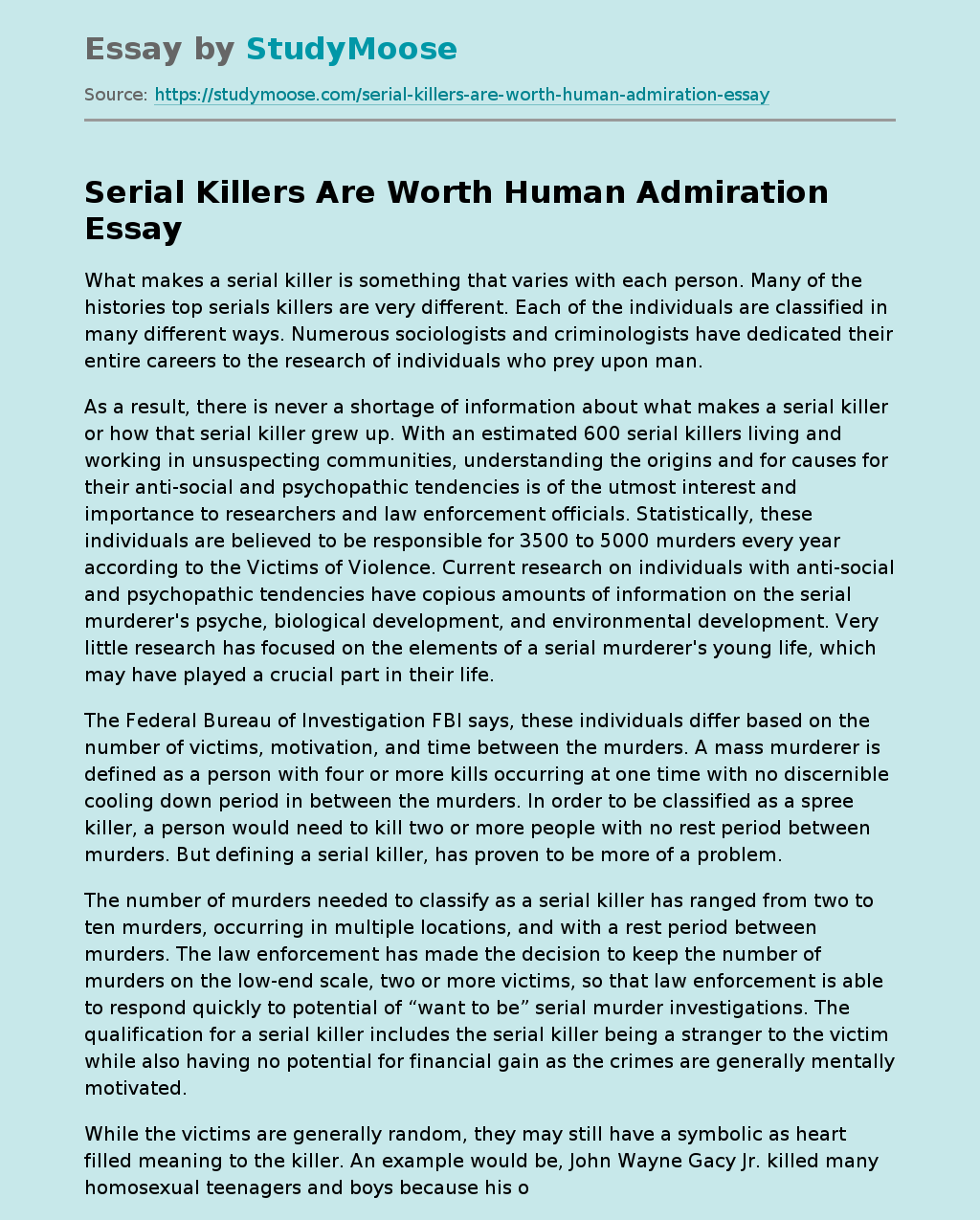