A serial killer is typically defined as a person who murders three or more people over a period of more than 30 days, with a “cooling off” period between each murder, and whose motivation for killing is largely based on psychological gratification (Princeton University). Every serial killer has either an intrinsic or extrinsic motivation. Extrinsic motivation occurs when we are motivated to perform a behavior or engage in an activity in order to earn a reward or avoid a punishment such as studying for a test to get a highscore unlike a Intrinsic motivation where it involves engaging in a behavior because it is personally rewarding for example going to your favorite class because you love learning.

(Plotnik, R. & Kouyoumjian. H. (2011). Introduction to psychology. Belmont, CA: Wadsworth). Pedro Alonso also known as The Monster of the Andes is known for mutilating and killing 350 girls over a three year period. His murderous mindset all started at a young age.

He was the seventh child of thirteen of a prostitute in the village of Tolima, Colombia, and was later kicked out of his family at the age of eight when he was caught fondling his younger sister.

He was then picked up by a man, taken to a deserted house and repeatedly sodomized . So him living off the streets, sleeping in alleyways, traveling from place to place and not being able to trust anyone had lethal damage to his mind. While living on the streets he was adopted by an American family who supported him, and gave him shelter.

After a few years he ran away because a teacher molested him at the school he attended. At 18, he says, he was gang­raped in prison and, he claimed, killed three of the rapists while still incarcerated. After his jail term he started preying on young girls in Peru. In an interview when he was incarcerated he described how he would commit his murders “I would take her to a secret hideaway where prepared graves waited.

Sometimes there were bodies of earlier victims there. I cuddled them and then raped them at sunrise. At the first sign of light I would get excited. I forced the girl into sex and put my hands around her throat. When the sun rose I would strangle her.” He later on describes “It was only good if I could see her eyes, it would have been wasted in the dark — I had to watch them by daylight. There is a divine moment when I have my hands around a young girl’s throat. I look into her eyes and see a certain light, a spark, suddenly go out. The moment of death is enthralling and exciting. Only those who actually kill know what I mean.”This was just the beginning, Pedro committed more of these murders later in his futer in Colombia, Ecuador and Peru. Doing this over 300 times showing us that he only had one reason to do this. In this quote he shows a extrinsic motivation because he gets a feeling of enjoyment watching them die in front of his eyes. Pedro Lopezs motives would be considered extrinsic since with each of his killings he would always wait every night until the morning to see this spark from the victims eyes disappeared and he did that with hundreds of them.

That was his trophy, his reasoning to do what he does. He loved this feeling so much he said while in prison in Ecuador “When I am ​ released​ , I will feel that moment again”(MurderPedia) In this quote he says that if he was to ever be released from prison he would commit the same crimes over again. Although Pedro Alonso Lopez is extrinsically motivated, some people might consider Pedro to be intrinsically motivated considering how he kept committing these crimes. For this to be considered as an intrinsic motive, Pedro has to have done it continuously because it intrigued him. “Just as other men shave, shower and eat, Lopez killed on a regular basis slaying two, sometimes three girls every week, every month” (Ron Laytner, Edit International) this quote conveys the idea of murdering that he committed a murder as if it was necessary for him as a regular day schedule. It can be seen as if he did it because it intrigued him causing people to think of his cause as a intrinsically motivated. Even though his actions might show Pedro Alonso Lopez was both Extrinsic and intrinsically motivated, his life shows that it was highly affected extrinsically. ​

With his mother being a prostitute it gave him a type of idea of women and innocence. ​ “I went after my victims by walking among the markets searching for a girl with a certain look on her f ace — a look of innocence and beauty.”(unexplained­Mysteries.com) In his statement he says that he just doesn’t look for any girl but a specific one with a innocent look to them, something he didn’t see in his mother so it made up for the idea he had for innocence with the girls he found in Colombia, Peru and Ecuador. Killing them and taking their innocence as a trophy for him to have. In conclusion many people have a motive for the things they do, differentiating form either extrinsic or intrinsic. For Pedro Alonso Lopez his motive was extrinsic with the need to see and feel​ “ see a certain light, a spark, suddenly go out.”(AboutSerialkillers.com) this caused him to repeat the acts he did to hundreds of young girls across Colombia, Peru, and Ecuador. 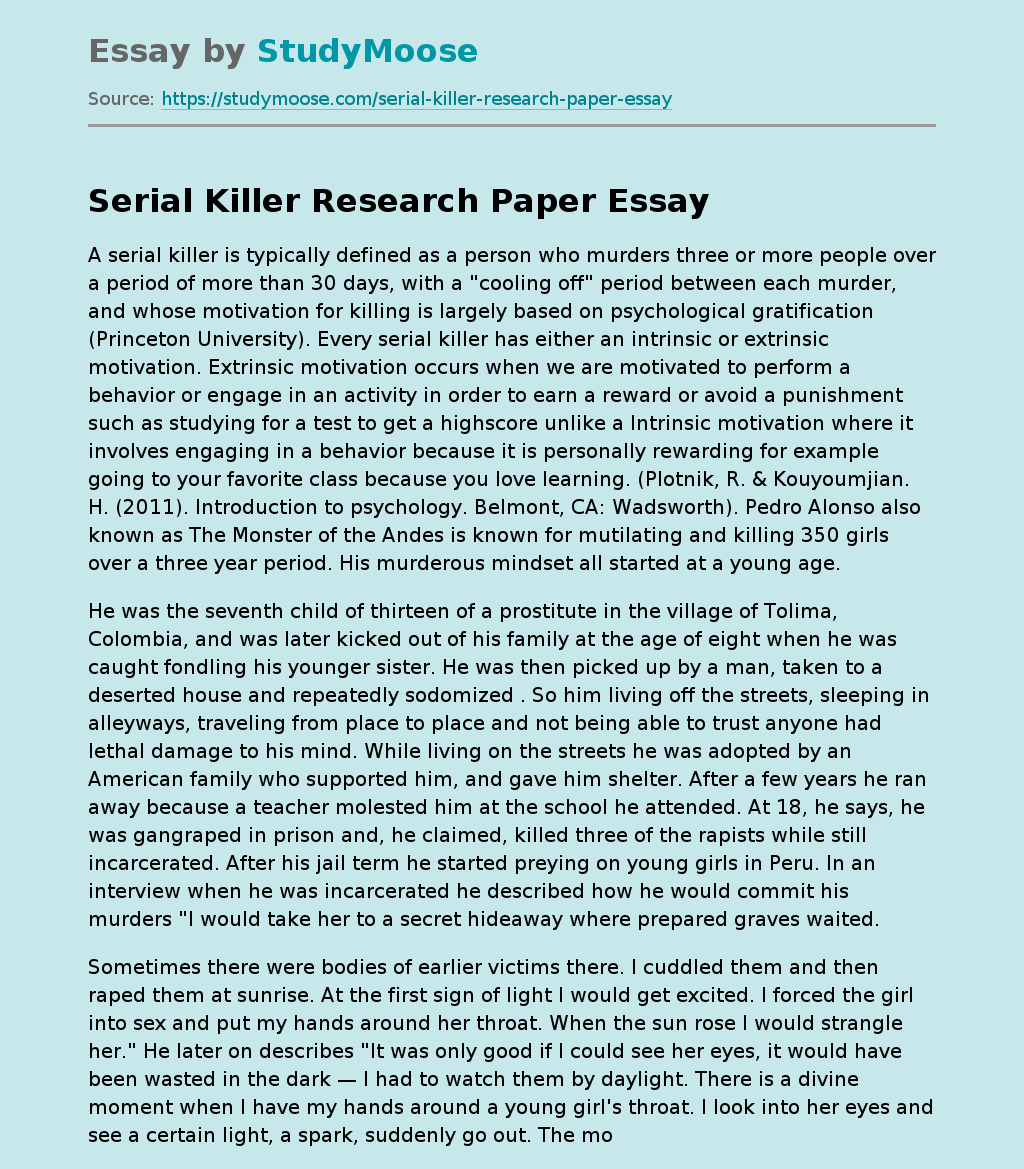