Michael Swango is a former medical doctor punished to complete for life sentence in federal prison for deliberately taking lives of more than sixty patients under his care. He has asserted in his own words that his notorious serial killing spree started in 1983. This research paper aims investigate and analyze Michael Swango in the lights of broad and diverse academic resources. The first section of research paper seeks to describe his early life. Other sections of the essay concentrate on providing extensive review on his psychological characteristics and patterns which made him a serial killer.

Don't use plagiarized sources. Get your custom essay on
“ Serial Killer ”
Get custom paper
NEW! smart matching with writer

Early Life Michael Swango was brought up in Illinois and graduated from Quincy Notre Dame High School as one of the most outstanding students in 1972(Stewart, 1999). He was honorably discharged from Marine Corps in 1980 and attended Quincy University, formerly known as Quincy College. Later, he attended Southern Illinois University Medical School. Literature Review Literature suggests that serial killers are most likely to suffer from Antisocial Personality Disorder.

However, they appear to be normal or charming and hide behind the mask of insanity.

He was reserved and drew bitterness and dislike from his peers by spending most of his time working as local ambulance attendant.

His peers recall that he had secured high grades in written exams but he was unable to identify the position of the heart in an x-ray. Another incident was in early anatomy class in which he had dissected cadaver which so spoiled that it became a school joke (Stewart, 1999). Swango had one specifically abnormal characteristic which left many professors shocked.

If reproached for making an error, he would go down to execute a series of self-chastising push-ups which was a punished practiced by the military. His classmates also asserted that he was obsessed with death. He exhibited morbid concern towards critical patients, nearly waiting for them to die. When they succumbed, he adapted a routine of marking ‘Died’ across their charts in capital red letters (Malmquist, 2006). When one of the students inquired about his cold behavior, he replied with an unpleasantly cold manner that death is inevitable. His peers also asserted that he acted as if he has the license to kill.

Serial Killer. (2017, May 08). Retrieved from http://studymoose.com/serial-killer-essay 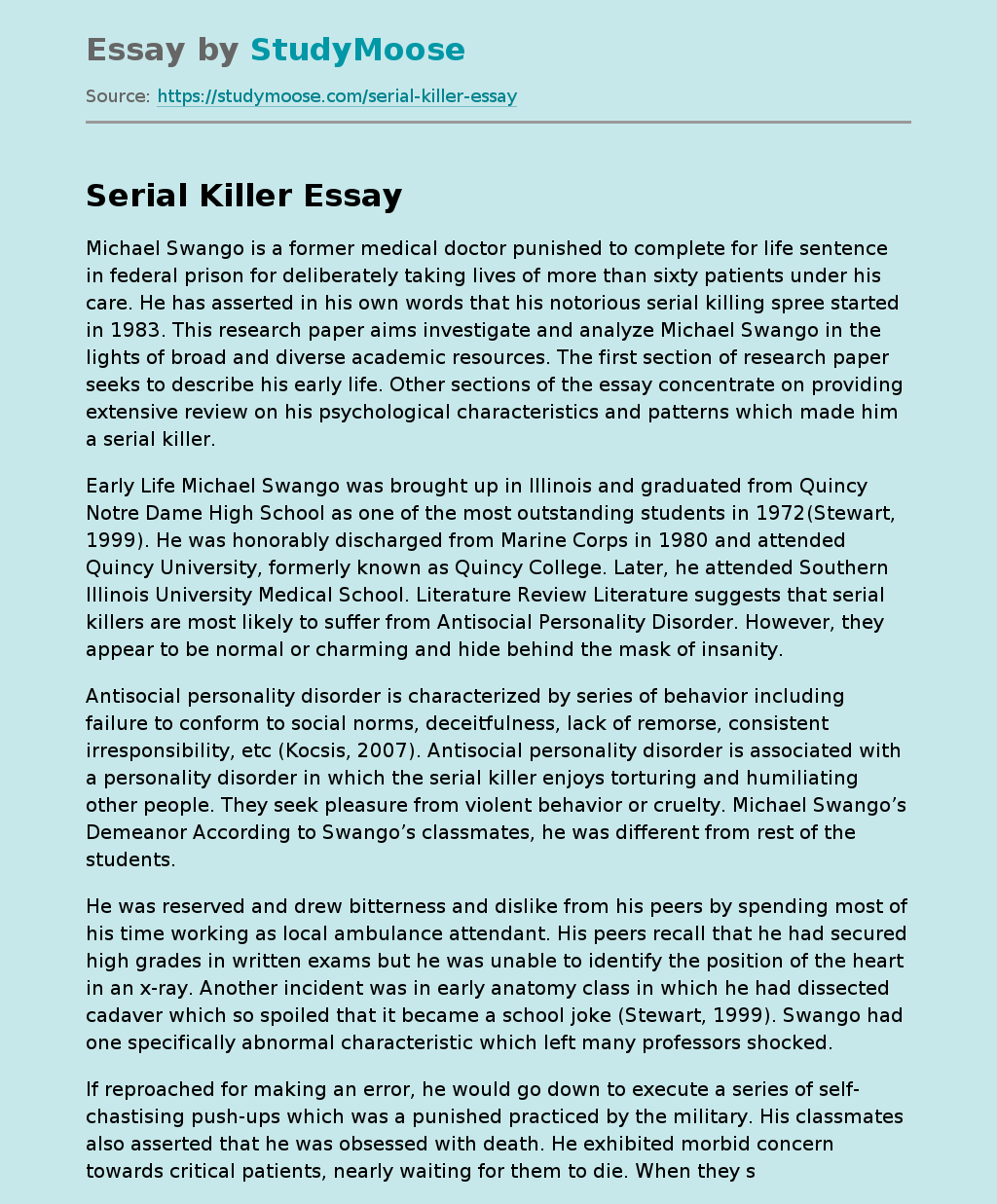