Separation of Singapore from Malaysia

2. Why was separation inevitable?

Don't use plagiarized sources. Get your custom essay on
“ Separation of Singapore from Malaysia ”
Get custom paper
NEW! smart matching with writer

KL proposed Singapore increased its contribution from 40% to 60%. Singapore feared this would cripple its economy. 4. Political reasons – impact of the elections on the r/s betw PAP and the Alliance 1963 State Election in Spore PAP won 37 out of 51 seats contested. The Singapore Alliance (made up of UMNO, MCA and MIC) did not win any seat. Alliance leaders in KL were upset with the outcome. 1964 Federal Election in Malaysia PAP took part, aim to build a Malaysia not based on racial lines, equal opportunities for all.

Racial Politics – Effects of the anti–PAP campaign UMNO embarked on an anti-PAP campaign using the Malay press, esp Utusan Melayu. Criticised PAP for not looking after interests of the Malays in Singapore. Exploited resettlement of Malay families in the Crawford, Kampong Glam and Rochor areas. Meetings were held betw PAP and Malay reps regarding education, employment and housing for Malays. Tension grew as matters did not improve. Led to the racial riots in 1964.

6. PAP’s Malaysian Malaysia campaign PAP campaigned for a Malaysian Malaysia, where everyone has equal rights and opportunities. October 1964 The Singapore Alliance stated that they would reorganise themselves to win enough votes in the 1967 Singapore state election to form a new government. 7. Events and implications May 1965 PAP brought together four other Malaysian opposition parties to form Malaysian Solidarity Convention (MSC).

Aim for a Malaysian Malaysia where everyone would be treated equally regardless of race or religion. PAP greatly angered UMNO leaders, some even called for the arrest of Lee Kuan Yew. 8. Threats to Singapore’s peace Internal threat – 1964 Racial riots 21 July 1964 More than 25,000 Malays gathered at Padang to celebrate Prophet Mohammed’s birthday. Speeches were made by Malay leaders, some criticised PAP for ill-treatment of the Malays.

A policeman was assaulted in a procession in Geylang. Rest started attacking Chinese. Clashes between Chinese and Malays broke out in different parts of Singapore. 9. Continuation of racial riots Curfew was imposed and only lifted on 2 nd Aug 1964. 23 people were killled and 454 people injured in the riots. Sept 1964 – Another race riot occurred 13 people were killed and 106 were injured.

10. External Threat – The Indonesian Confrontation Indonesian trade embargo – Singapore’s trade declined and some people were unemployed. However Singapore was not severly affected as trade with other countries continued. Violence and disruption of peace Indonesian agents set off bombs – innocent people were killed and properties damaged. By March 1965, 29 bombs had been set off in Singapore. A voluntary Vigilant Corps was set up to help defend Singapore. Confrontation ended in Aug 1966 when new Indonesian government took over.

11. Separation 7 Aug 1965 Tunku Abdul Rahman announced that Malaysia will “expel” Singapore. 9 Aug 1965 Lee Kuan Yew announced attainment of full independence. Singapore became a Republic Head of State – the President Legislative Assembly was renamed Parliament, members known as Members of Parliament. 12. Challenges ahead Economic – No natural resources and industries were not well-developed. Defence – Singapore had to build up its own defence force to take over from the Malaysian and British military forces. Housing – Steps had to be taken to meet the housing needs of its growing population.

Separation of Singapore from Malaysia. (2016, Apr 27). Retrieved from https://studymoose.com/separation-of-singapore-from-malaysia-essay 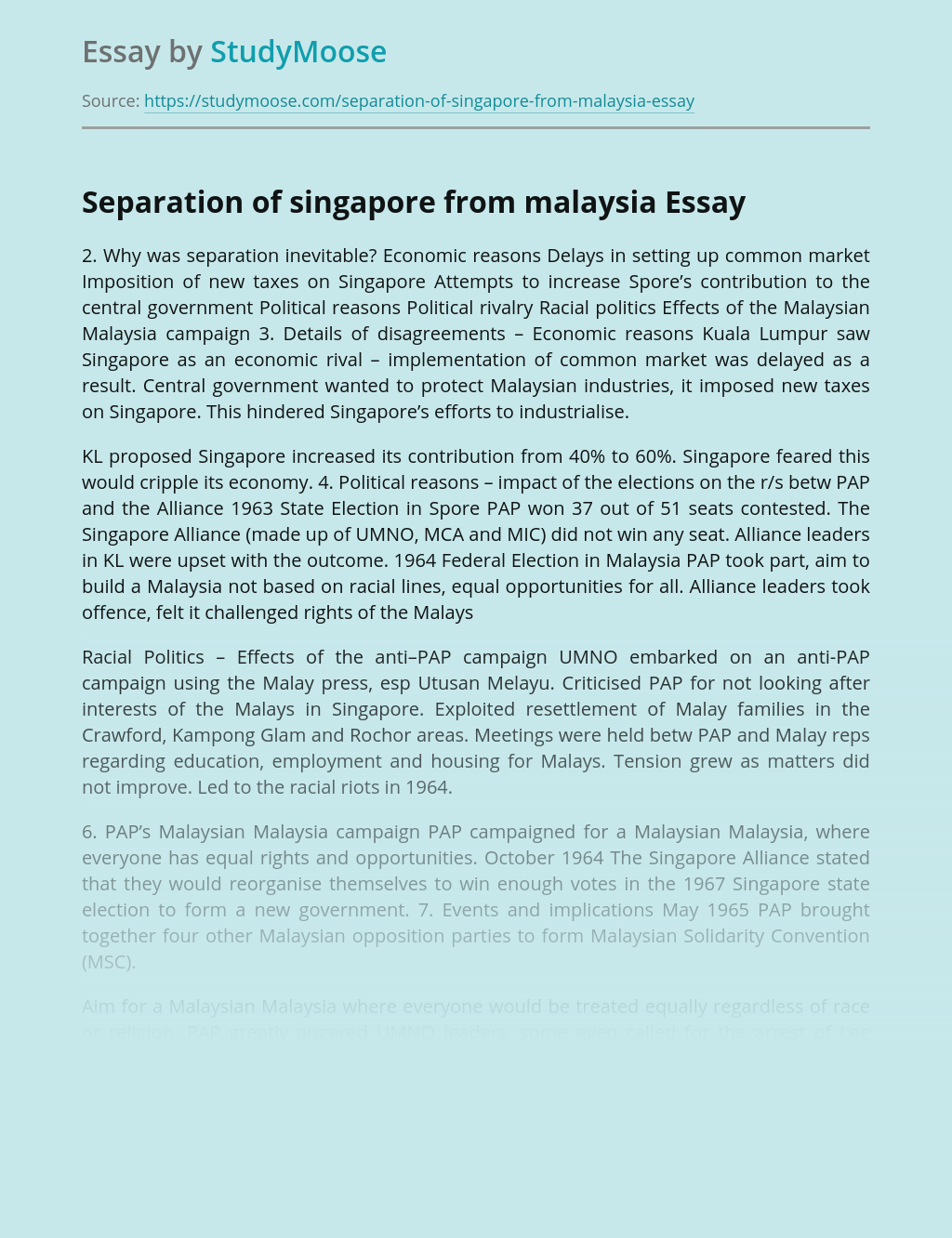