Sentencing
The criminal justice system has many important aspects within, the most important one is sentencing. Sentencing is the imposition of a penalty on a person convicted of a crime. (Schmalleger, 2011) This decision is determined in judicial proceedings by judges and in some cases juries may be involved. In the following paragraphs the philosophical reasons and punishments for sentencing of criminals will be explained. There are four main philosophical reasons that surround the purposes of sentencing a criminal, which are retribution, incapacitation, deterrence, and rehabilitation.

First is retribution which is based on a perceived need for vengeance, used in the earliest societies.

Whereas they believed in punishments to fit the crimes, which was stated in the bible. In the “Old Testament dictum of “an eye for an eye, a tooth for a tooth” –often cited as an ancient justification for retribution- which was believed to be intended to reduce severe punishment for minor crimes.” Second of criminal sentencing is incapacitation which protects members of society who may be in danger of harm by the offender.

(Schmalleger, 2011) The fourth and last philosophical reason is rehabilitation, which is an attempt to reform a criminal and their behavior.

These sentences determine the way time is served when there is more than one charge, consecutive sentences are served one after the other, and concurrent sentences expire simultaneously. This sentencing allows for the differences in degrees of guilt to be taken into consideration by a judicial figure. Many determinations are also considered because of an inmate’s behavior while incarcerated as to the time served, others can be because of involvement in work or study programs. Structured sentencing is the model of criminal punishment that includes determinate and commission-created presumptive sentencing schemes, as well as voluntary/advisory sentencing guidelines. These two different sentencing’s take on the form of punishment to be imprisonment, which for the crime could be burglary, with or without weapon, and other felonies. Also under this sentencing is another form which is Mandatory sentencing which is for habitual offenders convicted of a series of crimes. In some case there is what they call a presentencing investigation, where the judge request information on the background of the convicted defendant.

This investigation is usually done by probation and parole officers which they then submit the report called a PSI (presentence investigation report). Depending on the extent of a crime which can determine the form of punishment, there are some victims that experience this as well as the offender. The victim can be traumatized by these experiences which on the determination of the punishment the offender may be sentenced to restorative justice (RJ). Restorative justice is when the offender is held accountable for obligation to the victim and community. The offender can be sentenced to restore the victim by restitution payments which may reimburse the victim for suffering, lost wages, and medical expenses. Another sentence for the offender could mean face to face meetings with the community and the board of representatives.

The offender makes amends with the community in the form of community service work, restitution, victim-offender mediation, victim-empathy programs, driver improvement courses, and the like which can be determined by the board. (Schmalleger, 2011) These programs can benefit the victim as well as benefiting the offender. One of the oldest form of punishments is fines, which can put a financial strain on the defendant due to the economic burden unless the defendant is wealthy. Fines are used in minor law violations such as driving while intoxicated, reckless driving, disturbing the peace, disorderly conduct, public drunkenness and vandalism. They may also be used in some courts for serious violations such as assault, auto theft, embezzlement, fraud, and the sale and possession of various controlled dangerous substances. (Schmalleger, 2011) The most extreme sentencing there is, is capital punishment.

Capital punishment or the death penalty has been widely used throughout the United States over the years. As of today there are 35 out of 50 states that permit execution along with the federal government. Crimes for capital punishment in some jurisdictions are first degree murder, treason, kidnapping, aggravated rape, the murder of a police or corrections officer and murder while under a life sentence. In today’s court the relationship between sentencing and punishment go hand in hand. I think that some of the punishments are too lenient for the crimes, I believe in doing the time for doing the crime. The punishment should fit the crime and if they went back to the way things used to be done in the old days there may be less crimes committed. There are four philosophical reasons explained that link to sentencing and the punishments. 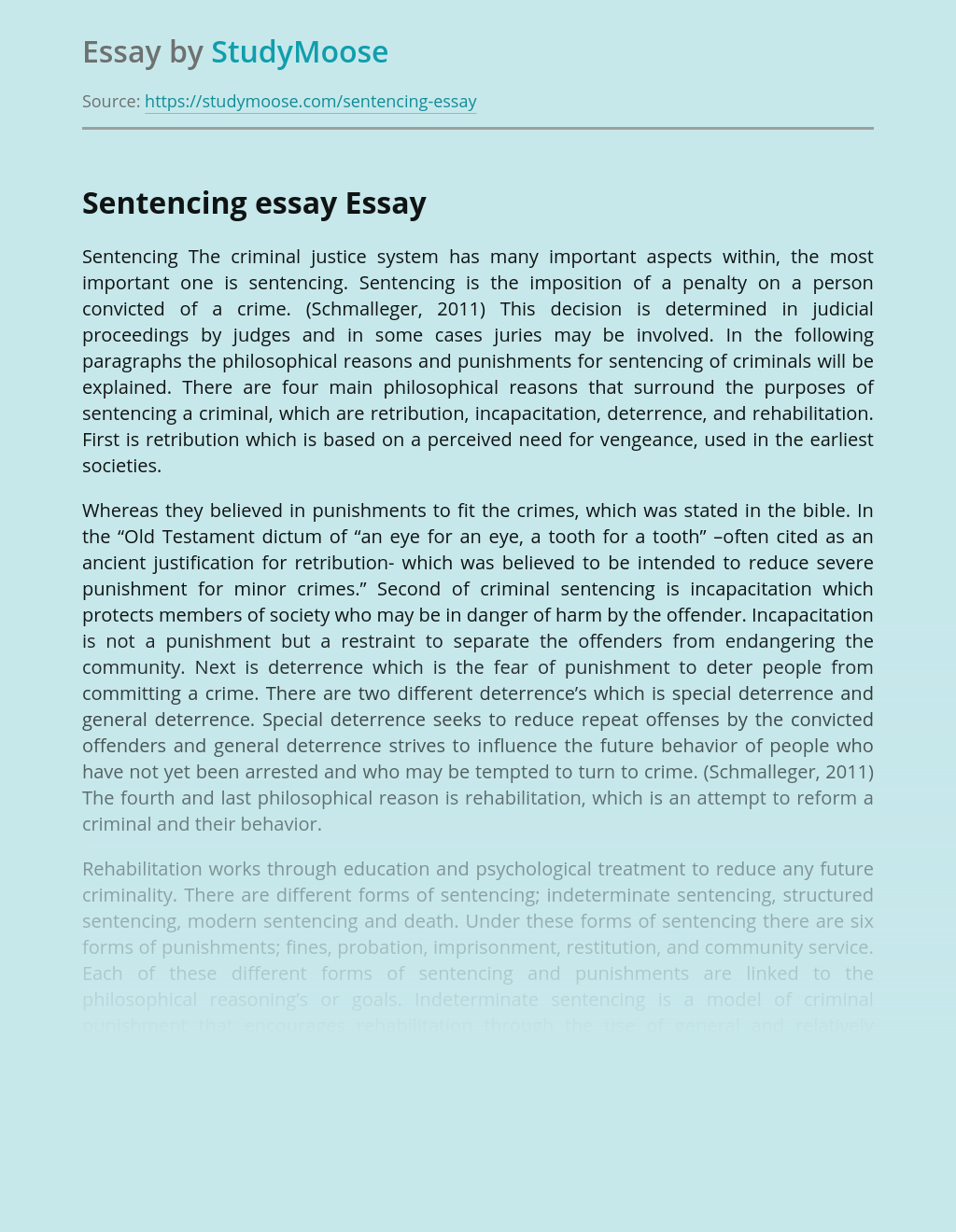