What do you know about sense of humor? Did you know that it helps you control human health and emotions? “Sense of humor is a way to produce and experience pleasure by provoking or being provoked to laugh. It is also a trait of appreciating the humorous, you can’t live without humor it is inexplicable” (McMahon). “Most people have it and are able to laugh at jokes or funny situations that people make. This is developed at a very early age, and it is considered vital part of human development” (McMahon).

Don't use plagiarized sources.
Get Your Custom Essay on Sense Of Humor Essay Just from $13,9/Page

First of all, what is sense of humor? Where does it appear? Sense of humor is a way to produce good emotions like pleasure; these are provoked by crazy or funny acts, jokes, and the ability to be amused. Sense of Humor appears to be very important in human survival. When you laugh you lose tension or relax your mind. This for example can make people in bad situations take good decisions.

“Physiological studies say that by having sense of humor you will make you a happier person, and in almost all cases, you will have a healthier life. There are very few people that don’t have sense of humor. For me this is inexplicable and irrational. People lack senses of humor, often have autism”(Nichol). “They have the ability to develop their disabilities or sometimes lack one. This is very weird because sense of humor plays a very vital role in the world”( 10 Different Types Of Humor). There are people that have sense of humor, but do not understand the funny part of a joke for example. If we compare cultures, sense of humor is very different. For example in the Ancient Greece, sense of humor started with Plato, which contributes Socrates by making the Philebus. “They say that ridiculous was ignorance from the weak people. So the weak cant revenge when ridiculous things happened to them. Later Aristotle suggested that humor is not fundamental by being considered weak or strong.” (McMahon). “ In India, sense of humor was defined as one of the nine “nava rasas”. “Nava” was defined as the imitations of the emotions that the actors perform. Each “Rasas” was associated or joined to the “bhavas” or “navas””( Mahadevan).

There are a lot of theories of humor. The ones that I will talk about and are the most important for me are the Relief Theory, Superiority Theory, Incongruity Theory and the Ontic-Epistemic Theory of humor. First of all this theories explain about how and why people laugh and how is the moment in a situation and a concept. “The Relief Theory of humor explains that laughter is being maintained in a homeostasis mechanism. This will reduce tension. It facilitates the relief of the tension that are caused by fears or something you are scared of. Laughter, according to this Theory called the Relief Theory is a result from the release of nervous energy” (Monro). The next theory is called the Superiority Theory; “this explains that people laugh about the bad luck of other people. This misfortunes or bad luck will make other people feel better that the others. In other words, feel superior” (Monro). The next theory is called the Incongruity Theory. “This theory says that humor is shown when something is said at an incorrect moment and will make everyone laugh. This theory is not the incongruity, but it is the resolution and the realization” (Monro). “The Ontic-Epistemic Theory of humor was proposed by P. Marteinson. This theory says that laughter is a reaction of a start without an end. This is when the person appears no longer to be real” (Monro). The evidence is clear; not all people have sense of humor. In my opinion, in a human, it’s irrational and inexplicable not having sense of humor, but there are some people that have it. Having sense of humor will help your body having better emotions by all types of sense of humor. A person, who doesn’t have sense of humor, lives a very boring life. In my opinion they live a life without a meaning, but in this I don’t say that if you don’t have sense of humor you will not be a person with success. You can have success, but without sense of humor it will be very difficult to express and communicate with others. Sense of humor is something that you say or act in a way that people looking at you get or sees it fun, and they are provoked to laugh. 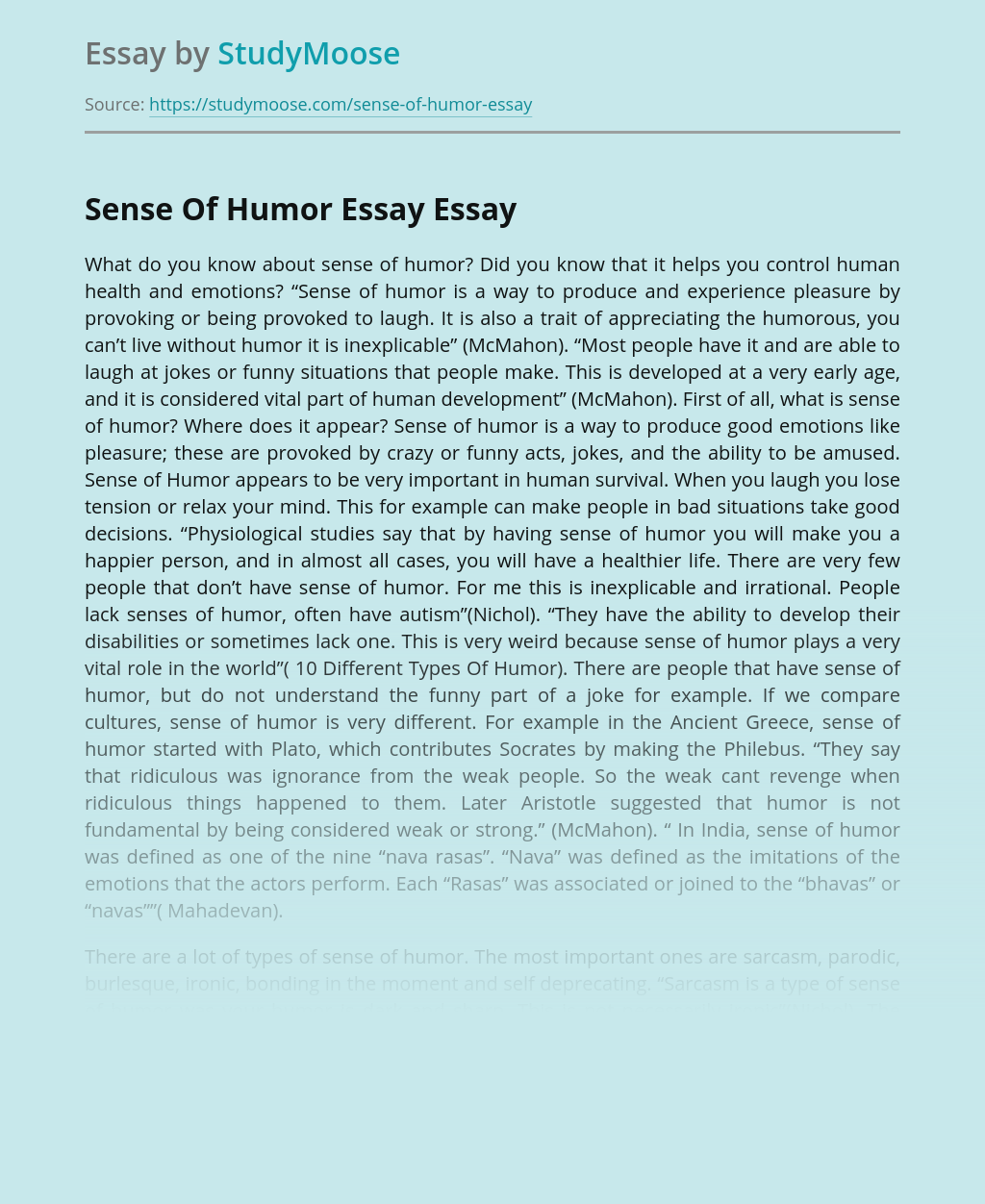 Jane Austen's Use of Irony in Pride and Prejudice

Irony is the art of expressing two meanings simultaneously; the obvious surface meaning the majority will regard as the only meaning and on a deeper profounder meaning which lies behind the obvious. The tension created by this ambivalence can be and has been put to a variety of uses. Ironies abound in Shakespeare, so do...

Get Essay
"The Merchant of Venice" as a Tragicomedy

Consider the play as a tragicomedy Shakespeare’s ‘The Merchant of Venice’ is a comedy with a difference. It was written almost certainly between 1596 & 1598. The play is classed as one of the 16 comedy plays but it is also a ‘problem’ play due to the tragic elements woven throughout the intricate plot. The...

﻿Merchant of Venice- Romantic Comedy or not?

A romantic comedy is a play that integrates romantic elements as well as humour. In Shakespeare’s romantic comedies, the protagonists live happily ever after, and more often than not, the play ends with the tolling of wedding bells, with more than one couple getting married to create a joyful atmosphere. Love always seems to triumph...

Stressed and sore-footed Americans everywhere are clamoring for the exciting new MagnaSoles shoe inserts, which stimulate and soothe the wearer’s feet using no fewer than five forms of pseudoscience. “What makes MagnaSoles different from other insoles is the way it harnesses the power of magnetism to properly align the biomagnetic field around your foot,” said...